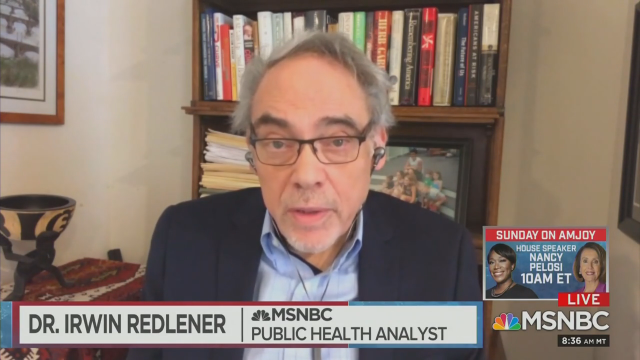 Donald Trump: akin to a homicidal cult leader? Yup, if you believe Joy Reid's guest this morning, MSNBC analyst Dr. Irwin Redlener. Calling President Trump  the leader of a "cult," Redlener said that President Trump's "cultish following reminds me of Jim Jones and the Koolaid and all that horrible stuff."

Jones was, of course, a mass murderer, responsible for the deaths of more than 900 of his followers, whom he ordered to commit mass suicide in the Jonestown Massacre. It is outrageous for Redlender to compare President Trump with Jones. Is Redlener suggesting that Trump wants his followers to die? When it comes to finding a "silver lining" in the deaths of tens of thousands of Americans from the virus, perhaps Redlener is confusing Trump with Nicolle Wallace.

Note that Redlener currently serves as an adviser to NYC Mayor Bill de Blasio. Well into March, appearing on MSNBC, de Blasio was encouraging New Yorkers to go about their lives "normally," saying there was "very little threat" for most of them. Subsequently, there have been more than 11,000 coronavirus deaths in NYC. So who's the cult leader now?

And back in 2000, it was Redlener's advice that the Immigration and Naturalization Service relied on to forcibly remove Elian Gonzalez from his U.S. home and return him to Cuba.

JOY REID: At this point, for his supporters, they do know who to listen to between Fauci and Trump. They listen to him!

And Donald Cult — Donald Cult--Freudian slip, Donald Trump has a cult and unfortunately I — I think that the people that are in his cult that are immovable from following him are going to be in significant harm if they follow this advice not to mention the hydroxychloroquine which has actually caused some deaths in people it’s thought.