Scarborough: I'm Not Voting for Trump!

On today's on Morning Joe, Joe Scarborough flatly stated that people that know him, as in his family, know whom he's voting for, and "it's not Donald Trump!" That's newsworthy because Scarborough has been accused by many, as here, here and here, of being in the tank for Trump. Clashing with Time's Joe Klein, Scarborough said that, while not supporting Trump, he and Mika Brzezinski have simply been making the case that for months, the media have been "dead wrong" about Trump in constantly predicting his imminent demise.

Klein, meanwhile, paid a very backhanded compliment to Trump. According to Klein, Trump has a "highly developed lizard brain" and a "feral intelligence," while knowing nothing about policy. Klein added that Trump reminds him of "the Emperor Caligula who got his greatest pleasure from destroying his opponents and humiliating them."

So if not Trump, for whom is Joe pulling? We know he's been rough on Rubio, so that leaves . . .

JOE SCARBOROUGH: I'm making the point that they [the media] have been dead wrong about Trump for six to nine months. And by the way, right now we're getting the slings and arrows, not because we support Donald Trump, as I said, anybody that knows me, my family, they know who I'm voting for: it's not Donald Trump! But at the same time, we have been skewered because we have simply said, he's not an idiot that is going to lose this race.

JOE KLEIN: He has a very, very highly-devloped lizard brain.

KLEIN: He really, he has a very evolved --

KLEIN: He has a feral, a feral intelligence.

KLEIN: He reminds me of the Emperor Caligula  --

KLEIN: -- who got his greatest pleasure from destroying his opponents and humiliating them. And he's brilliant at that. But he doesn't know anything about policy, Joe.

Note: the screencap shows Joe rising to call for a doctor in the house to treat Klein, whom Scarborough diagnosed with the first known case of Trump Derangement Syndrome. 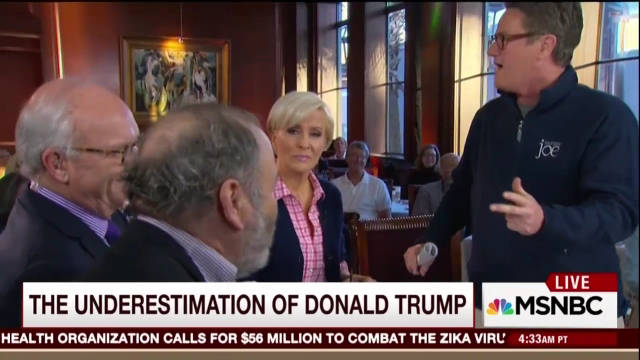