Welcome to the official Evangelical Christian Church of America, brought to you by President Ted Cruz . . .

That's the scare-mongering scenario that Joy Reid painted on MSNBC today. Reid alleged that as president, Cruz would "ignore" the part of the Constitution prohibiting the establishment of a national religion. She in essence falsely accused Cruz of planning to establish evangelical Christianity as the law of the land.

Reid was right in saying that the Constitution prohibits the establishment of a "national church." But she completely misrepresents Cruz in claiming he would "ignore that part of the Constitution." What he wants to do is protect the Constitution, and prevent liberal Justices from imposing what amounts to the religion of secular humanism on Americans by "discovering" non-existent rights in the Constitution, such as a supposed constitutional right to abortion. 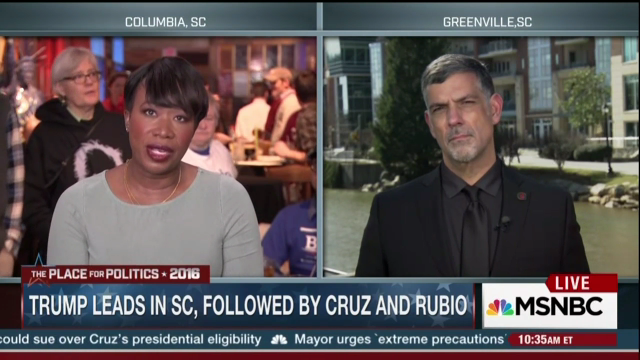 JOY REID: Joining me now from Greenville is pastor Mike Gonzalez, evangelical chairman with the Ted Cruz campaign in South Carolina and the senior pastor at Columbia World Outreach Church. Thanks you very much pastor: appreciate you being here.

PASTOR MIKE GONZALEZ: It's good to be with you, Joy.

REID: So, explain to me, if you will, what are the main issues, the most important issues at least when your congregants talk to you and not to have you speak for the entire evangelical community in South Carolina, but what do you hear are people's most important issues?

GONZALEZ: Well really, the most important issues for evangelicals in South Carolina, and really for evangelicals at large, are the issues of life and marriage and really religious freedom. And also I would add a fourth to that, and that is someone, a president who will uphold the Constitution, who is a lawful president. And that's what Ted Cruz is. And that's why we're seeing such a groundswell of evangelicals coming around Ted Cruz in South Carolina. We've been working diligently towards that.

REID: I want to play a little bit of Ted Cruz talking about how his faith would influence his decisions were he to be the President of the United States. Let's take a listen.

TED CRUZ: A critical question is who do you trust on Supreme Court justices? We are one justice away from the Supreme Court mandating unlimited abortion on demand up to the moment of birth.

REID: And Pastor Gonzalez, what do you say to Americans who are more secular who say what we don't want is to have a president in the White House who is essentially using his own personal faith to run the country when the Constitution has a separation of church and state.

GONZALEZ: Well, the reality is that this idea of the separation of church and state is a myth. I mean, you bring your faith into the marketplace just like you do anything else. So Ted Cruz is a -- will be a president not just, you know who is a preacher or pastor in the White House; that's not the idea. But I believe that all people, all Americans can rally around Ted Cruz because he upholds the Constitution. I believe all Americans want to truly uphold the law.

REID: Let me just push back on you a little bit. Becaue the separation of church and state is in fact not a myth, it's a constitutional fact. It's a fact on the ground. It's a part of our constitutional makeup. The Founding Fathers were very explicit that they did not want to have a national church. So can a candidate like Ted Cruz run on essentially saying he would ignore that part of the Constitution if you're saying he's a president who would actually run on the Constitution?

GONZALEZ: Well what I'm saying is that the Constitution upholds our First Amendment rights. Ted Cruz is practicing that. He's not violating that. So the idea that he would do anything else but really follow the law and the Constitution, it's just not true. He's going to do that. Our faith is a vital part to our lives. But that doesn't mean he's in the White House preaching, you know, all of the time he's going to be doing that while he's president. But it's his faith, it's who he is. You can't separate him. It's like when you scramble eggs, you can't unscramble them. That's the reality. Our Constitution gives us our religious rights and our religious freedoms. You can't take that away.