How damaging to Republicans are Speaker-presumptive Kevin McCarthy's comments in which he tied the drop in Hillary's poll numbers to the Benghazi hearings? Very damaging, according to the With All Due Respect duo on today's show. John Heilemann called them a "disaster" for congressional Republicans and GOP presidential candidates alike.  Mark Halperin called them a "huge, huge problem" for the GOP.

Interestingly, Halperin praised committee chairman Trey Gowdy, saying that he had been "carefully preparing the hearings, trying to do what no Republican has done in a long time, run a politically effective, substantive hearing." But, said Halperin, there's "almost nothing he can do now."

What do NB readers think?  Is this a mere kerfuffle, or a serious problem for Republicans? How much will it/should it affect McCarthy's candidacy for the Speakership? 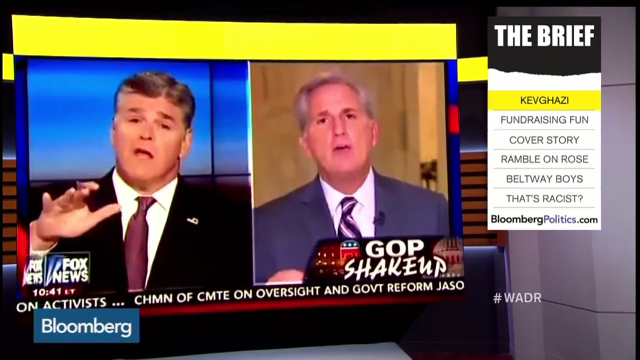 JOHN HEILEIMANN: House Republicans say ohh, sh--shoot. House Republican leadership elections are now set for next Thursday, and on day three of Kevin Mccarthy's role as Speaker of the House-presumptive, he made a whopper of a gaffe. And where did he make this faux pas of epic proportions? Was he in the lions den of Rachel Maddow? No, he was not. He was in the plush kitten's bed of Sean Hannity.

KEVIN MCCARTHY: Everybody thought Hillary Clinton was unbeatable, right? But we put together a Benghazi special committee. A select committee. What are her numbers today? Her numbers are dropping. Why? Because she's untrustable. But no one would know any of that had happened had we not fought and made that happen --

SEAN HANNITY: I agree, that's something good. I give you credit for that.

HILLARY CLINTON: I have to tell you: I find them deeply distressing. So when I hear a statement like that, which demonstrates unequivocally that this was always meant to be a partisan, political exercise, I feel like it does a great disservice and dishonors not just the memory of the four that we lost, but of everybody who has served our country.

HEILEMANN: Putting aside the sheer, rank, almost incalculable stupidity of this comment of Kevin McCarthy's, I ask you, in terms of politics, on a scale of 1 to Godzilla, how good is this for Hillary Clinton -- and how bad is it for the following: Kevin McCarthy, Trey Gowdy and the Republican party?

MARK HALPERIN: Horrible for every Republican you listed. Look, it's bad for McCarthy because you and I both talked about how Boehner was underestimated and underappreciated. Being Speaker of the House, everything that you say gets scrutiny. McCarthy has never been on the stage. He is one of the least experienced Speakers ever, assuming he becomes Speaker after this.

HEILEMANN: Yes, after this.

HALPERIN: And for Gowdy, Gowdy had spent months carefully preparing the hearings, trying to do what no Republican has done in a long time, run on a politically effective, substantive hearing. A former prosecutor. Almost nothing he can do now, will not be attacked by Democrats who will just say this hearing is all political.

HEILEMANN: And let me say, you had set for a while you thought that Gowdy might pull that off. Now, Gowdy's had it taken out of his hands by McCarthy. Such a long shadow cast across. Hillary Clinton is going to say the things she said on TV today over and over and over again. I thought there was almost nothing that could break the momentum of this e-mail story, at least until she got to the hearings. Now she is on offense, they are on defense. This is a disaster, a disaster for congressional Republicans. And for Republican presidential candidates who want to see Hillary Clinton on her heels.

HALPERIN: Look, we talked about how McCarthy was not in a hostile place, he was on Fox. But he was facing a question of what have they accomplished. And the other thing that Democrats are going to turn to is not just the hearings are partisan and political, but saying this is what they think their accomplishment it -- political hearings.