The Democrat midterm gambit known as the House January 6 Committee held hearings Tuesday, spurring the host of MSNBC's Morning Joe to trash all Republicans on Tuesday morning. They used the desperate grab for attention by Republican Senate candidate Eric Greitens in Missouri as a way of trashing all Republicans and touting Democrats as the defenders of democracy.

For context, Greitens thought that it would be a good idea to promote his candidacy by depicting himself going into a house armed with a gun and other men in tactical armor. You see, he was “RINO hunting.”  You can make your own conclusion about whether that tactic is going to work. But it works for MSNBC.

As always, co-host Joe Scarborough led the conversations by using their favorite F-word for Republicans: "Every Republican needs to call this out unless they want fascism to continue to rise in their party." Washington Post columnist Eugene Robinson took it up a level higher by stating: “Yeah, Benito Mussolini would be proud.” He even added that “this is not a legitimate political discourse, as the Republican Party might call it.” 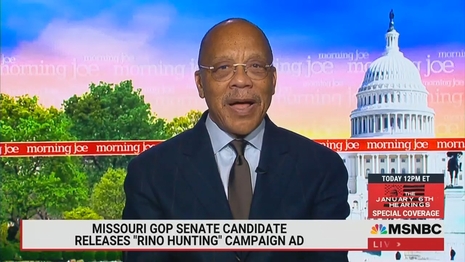 Scarborough explained to his yes-men that “this is what they (Republicans) do,” expressing that there are “several examples.” Scarborough then went on to talk about January 6 (again) and ads like Greitens’, calling out this “rise of American fascism.”

However, the MSNBC show still missed the mark when critiquing the ad, especially when Scarborough stated that “Republicans don’t call it out.” These people are clearly failing to take a look at the bigger picture. The majority of people on the right do not condone ads like Greitens, and it has been criticized. And they are certainly not fascists.

The way Scarborough and friends described it made it sound like that every Republican is like Greitens and hates democracy. And on a more hypocritical note, it seems like Scarborough has forgotten about all the violence committed by the oh-so peaceful left such as the assassination attempt on Justice Kavanaugh, and numerous attacks on churches and pro-life pregnancy centers. So, branding everyone on the right as violent is downright wrong and absurd.

And as always, the upcoming midterm elections was a topic of discussion for the team because they are starting to realize that there is a good chance that the left will not come out as victorious.

Mika Brzezinski made quite a tone-deaf comment stating: “This is why, unfortunately, this is the only thing that needs to matter when you're casting your vote.” This insightful comment is surely infuriating to those who are really struggling right now with the nonstop rise of inflation, gas prices and other necessities of daily life. Does Brzezinski really think that the so-called rise of fascism is on the mind of every American in this economy?

Even better, the topics of guns, abortion, interest rates and gas prices were mentioned on the show, but according to the almighty Joe Scarborough, fearing the “growing wing of the Republican Party” is more important; even though the majority of right-leaning Americans are once again, not aspiring fascists.

So Joe and friends, saying that an actual fascist dictator would be proud of the right, and that this election is about “pro-democracy versus anti-democracy”, is not only offensive, but it is also tone-deaf to real issues people are facing, and insulting to all those regular Americans out there who just don’t want a progressive, left-wing takeover.

This example of media bias was made possible by Vroom and IHOP.

JOE SCARBOROUGH: [Talking about the Greitens ad.] This is fascism. It's using violence and violent imagery to basically tell people, "Vote for me. A civil war is coming." You know, it's —  it's where we are. It's where the Republican Party is right now. Every Republican needs to call this out unless they want fascism to continue to rise in their party.

EUGENE ROBINSON:  Yeah, Benito Mussolini would be proud. And, just one question about this, isn't making terroristic threats a federal crime? I mean, why is this not –I mean- literally, you know, I’m like--I'm a free speech, pretty much, absolutist, but this is threatening.

It’s threatening primary opponents or anyone-- or any Republican who dares disagree with him with, you know, with assault, with a S.W.A.T. Team assault that would kill them. You know, this is absolutely impermissible, and there has to be some way this can be sanctioned. This is not right. This is not acceptable in political -- this is not a legitimate political discourse, as the Republican Party might call it. Anything but. This is a terroristic threat.

JOE SCARBOROUGH: This is what they do, Gene, this is what- this is what they do and Mika we've had several examples. There is a Congress member, whose name I'm not going to mention, who was holding an AR-15, and said we had to go after the squad and then showed four Democratic congresswomen in the picture as well, basically hunting for members of Congress and we see this time and time again. Republicans don't call it out. We’re seeing it here with the Greitens’ ad.

I would hope Republicans would call this out, but they just don't. I just want to underline, again, we're talking about the rise of American fascism. You can look at January 6th. You can look at ads like this, you can look at the continued use of violence and imagery, you can look at Donald Trump telling his audience members to beat people up in the audience that disagree with him. It is fascism.

MIKA BRZEZINSKI: This is why, unfortunately, this is the only thing that needs to matter when you're casting your vote, which is very hard to say, because this country has a lot of problems and we have a lot of growing pains we still need to go through.

We have a lot of issues, which we've fallen back on. But right now, this is the issue to vote on, and even Hillary Clinton made that clear. It’s either we move forward toward continuing a democracy or we fall into something very dark and very frightening and very real. It's not an exaggeration at this point, especially when you look at how this is pervading our politics from the bottom up. All started pretty much by Donald Trump.

There are a lot of other reasons from past presidencies that we got here, we can have that conversation, we can make all that blame, but this is where we are. This is what matters. It's not Democrat-Republican, in terms of voting.

BRZEZINSKI: And we should.

SCARBOROUGH: -- Interest rates, we can debate –

SCARBOROUGH: -- Quantitative easing. We can debate a thousand different issues, but for a growing wing of the Republican Party, it's just straight out pro-democracy versus anti-democracy.