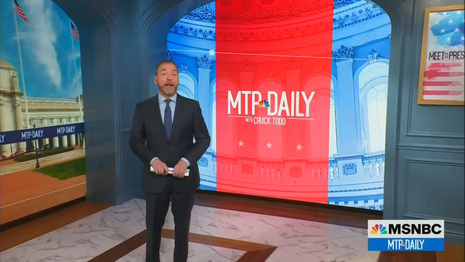 On Friday, Variety’s senior TV editor Brian Steinberg reported: “People who want to ‘Meet The Press’ with Chuck Todd Monday through Friday will have to do so via their broadband connection, not their set-top box.” He explained that “‘Meet The Press Daily,’ the weekday counterpart to NBC News’ flagship Sunday public-affairs program, will move to NBC News Now starting June 6,” with longtime anchor Chris Jansing taking over the 1:00 p.m. ET MSNBC timeslot.

“Todd’s exit from MSNBC comes as that cable outlet is de-emphasizing straight-news programming and playing up shows anchored by commentators, analysts and political experts,” Steinberg noted. He highlighted some the left-wing cable channel’s recent partisan hires: “On Saturday, MSNBC will launch a new program led by Symone Sanders, the former Democratic campaign aide and press advisor to U.S. Vice President Kamala Harris. MSNBC is expected to do something similar with Jen Psaki, the White House Press Secretary who on Thursday announced she would be leaving her role.”

Read the full article at Variety.