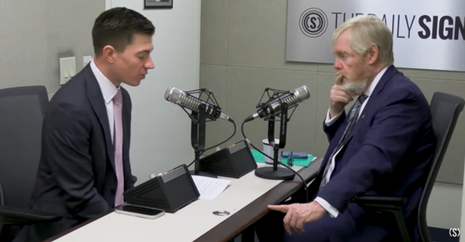 On Monday, The Daily Signal’s executive editor Rob Bluey conducted a podcast interview with Media Research Center President Brent Bozell about his career of holding the left-wing media accountable: “For 35 years, Brent Bozell has taken on the elites in media, Hollywood, and Big Tech. He’s built the Media Research Center into a powerhouse, created the Parents Television Council, aided grassroots activists with ForAmerica, and is now championing the First Amendment with the Free Speech Alliance.”

“As you survey the way things are today, what are your observations, what alarms you, what do you think our audience needs to know about the media?,” Bluey asked as the exchange began. Bozell responded: “Someone contacted me yesterday and pointed out that in the book we wrote about 10, 15 years ago, Tim Graham and I predicted this. We predicted the coming meltdown of the media.” He added: “We had so exposed them, and so peeled off the veneer of supposed objectivity, that they weren’t going to take it. They were going to do what cornered rats do, they were going to go for the jugular, and here you go.”

Read the full article and listen to the podcast at The Daily Signal.