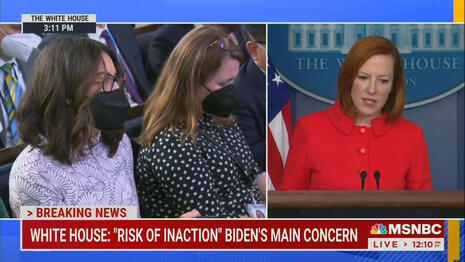 On Monday, The Daily Wire’s Virginia Kruta reported on West Virginia Senator Joe Manchin being “the topic of much discussion at Monday’s White House press briefing, where several reporters from multiple outlets asked press secretary Jen Psaki to weigh in on Manchin’s public announcement that he would not be voting for the Build Back Better Act.” The questions came after “Psaki referred to Manchin’s promised ‘no’ vote as ‘a sudden and inexplicable reversal in his position...’”

Kruta explained how “At the press briefing, several reporters brought up the situation between Manchin and the White House, asking whether President felt ‘betrayed’ by Manchin’s decision and whether or not Psaki knew of any plans to move the bill forward in the coming weeks.” She specifically cited ABC White House correspondent Cecilia Vega fretting: “Does the President feel betrayed?”

Read the full article on The Daily Wire.