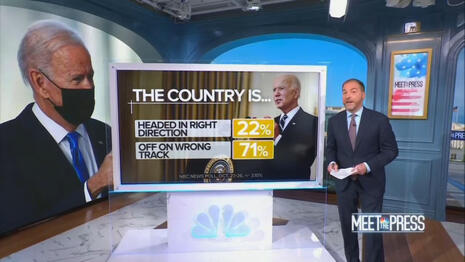 On Sunday, The Daily Caller reported on how “NBC’s Meet the Press moderator Chuck Todd laid out a recent poll Sunday that he said amounted to ‘scary news for Democrats.’” Associate Virginia Kruta noted that “Todd pointed to the new poll, conducted by NBC News, that indicates just 22% of Americans believe the U.S. is heading in the right direction while 71% believe it is not.”

She went through some of the other findings in what Todd described as a “shocking” survey: “According to the poll, only 37% of Americans believe Biden is ‘competent and effective’ or has the ability to handle a crisis. On the flip side, 50% do not believe the president is ‘competent and effective,’ and 47% are not convinced of his ability to handle crises.”

Read the full article on The Daily Caller.