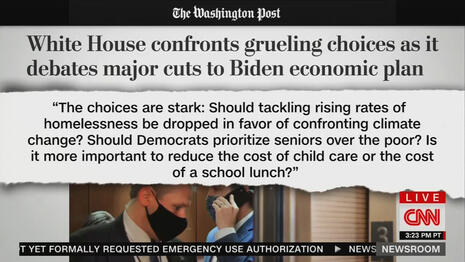 On Monday, Brandon Gillespie at FoxNews.com reported on The Washington Post fretting that White House willingness to appease West Virginia Senator Joe Manchin by not increasing spending quite as much – but still spend trillions – was somehow the equivalent of making “grueling cuts.” Of course this is about legislation that hasn’t even passed yet.

Gillespie noted how “Critics took to social media to blast [Washington Post reporter Jeff] Stein, taking issue with his framing that changes to the spending proposal would amount to a ‘cut,’ considering a negotiated bill would still lead to a massive increase in government spending.” Sadly, this is standard for the Orwellian left-wing press, which routinely defines any government spending increase that’s not large enough as money being slashed from the budget.

Go to FoxNews.com to read the full article.