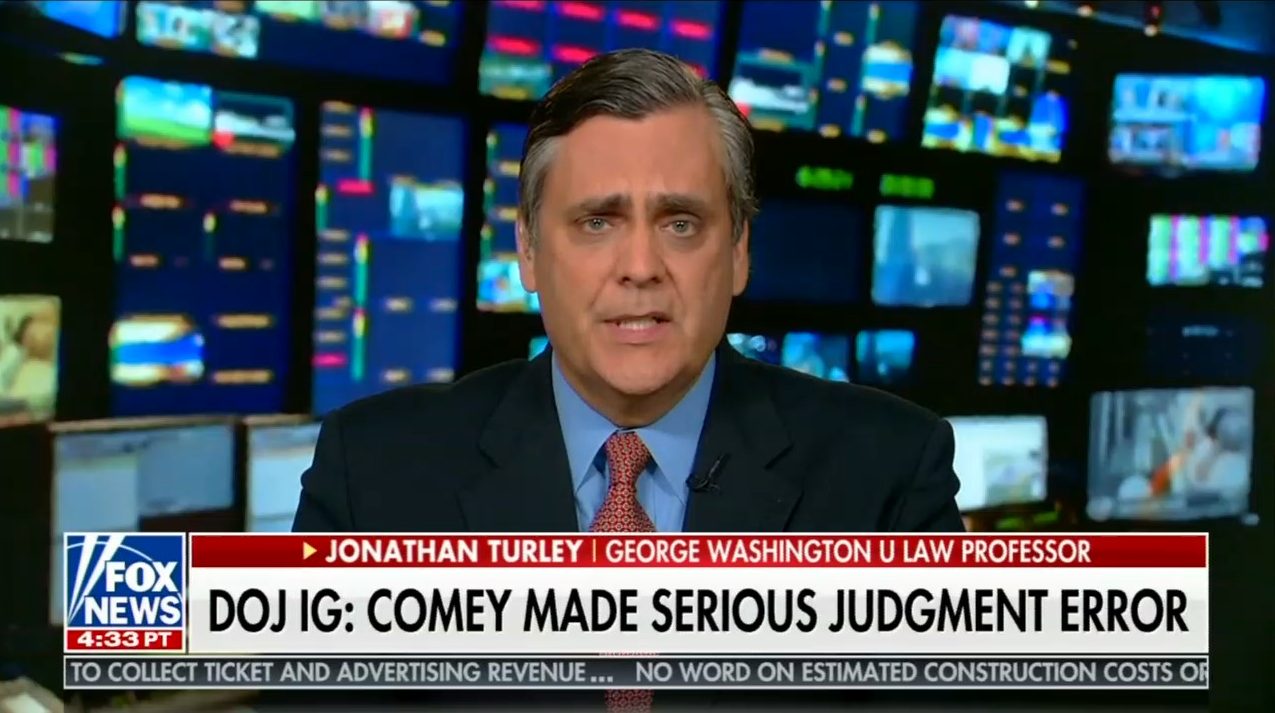 In a column for The Hill published Monday afternoon, George Washington University Law School professor Jonathan Turley took direct aim at the liberal media for mischaracterizing the findings of the Justice Department Inspector General report about the origins of the Russia investigation and spinning the findings to attack President Trump.

“The analysis of the report by Justice Department inspector general Michael Horowitz greatly depends, as is often the case, on which cable news channel you watch,” Turley lamented at the top of the piece. He then observed: “Indeed, many people might be excused for concluding that Horowitz spent 476 pages to primarily conclude one thing, which is that the Justice Department acted within its guidelines in starting its investigation into the 2016 campaign of President Trump.”

However, Turley employed a vivid analogy to explain how wrong the press framing of the report truly was:

This is akin to reviewing the Titanic and saying that the captain was not unreasonable in starting the voyage. The question is what occurred when icebergs began appearing. Horowitz says that investigative icebergs appeared very early on, and the Justice Department not only failed to report that to the Foreign Intelligence Surveillance Act court but removed evidence that its investigation was on a collision course with the facts.

As Turley outlined some of the “damning” and “unsettling” details actually presented in the report, he pointed out that “Horowitz contradicts the media claim that the [Steele] dossier was just a small part of the case presented to the FISA court. He finds that it was essential to seeking FISA warrants.” And that despite Christopher Steele’s serious credibility problems and being hired to conduct opposition research for Hillary Clinton’s 2016 campaign.

“Despite this shockingly damning report, much of the media is reporting only that Horowitz did not find it unreasonable to start the investigation, and ignoring a litany of false representations and falsifications of evidence to keep the secret investigation going,” Turley scolded.

He concluded the column by again invoking the infamous doomed ocean liner:

In other words, when the Titanic set sail, there was no reason for it not to. Then there was that fateful iceberg. Like the crew of the Titanic, the FBI knew investigative icebergs floated around its Russia investigation, but not only did it not reduce speed, it actively suppressed the countervailing reports. Despite the many conflicts to its FISA application and renewals, the FBI leadership, including McCabe, plowed ahead into the darkness.

On his own website on Tuesday, Turley went further in taking the press to task: “As has become a common practice, the report was immediately and grotesquely misrepresented.” He specifically cited one of the liberal cable channels: “On CNN, the takeaway was that the Inspector General ‘Debunks Trump conspiracy theory.’”

Referencing all the missteps by FBI in launching the Russia investigation during the Obama administration, Turley proclaimed: “Indeed, if this were a Democratic campaign put under Republican investigation on these grounds, there would be calls for massive hearings today from every editorial page and Democratic office.”

He continued to warn against the obviously biased media coverage of the IG report:

This is a deeply troubling report and shows that the Russian collusion allegations were poorly founded and quickly debunked by the FBI. That is not being fully reported because it does not fit a narrative that has taken hold of the media. That is a major story in its own right.

The press is only interested in cherrypicking information that it thinks harm Trump, any facts that don’t accomplish that goal are quickly downplayed or dropped.