On Monday, the three network morning shows were in ecstasy over Oprah Winfrey’s Golden Globes acceptance speech and already predicting a 2020 presidential run for the former daytime talk show host. Anchors and correspondents seemed to be trying to outdo one another in who could heap more sycophantic praise on the liberal entertainer.

ABC’s Good Morning America co-host George Stephanopoulos opened the broadcast by hyping calls for Winfrey to enter the upcoming campaign: “At the beginning of the night, Seth Meyers joked about her running for president. After that acceptance speech, so many on Twitter endorsed idea, #Oprah2020, the meme of the night.”

Reporting on the Hollywood awards show from Los Angeles, correspondent Lara Spencer gushed over the idea: “And overnight, her longtime partner Stedman Graham saying a presidential run is a possibility, telling the L.A. Times, and I quote, ‘It’s up to the people, but she would absolutely do it.’ I can tell you both, after that speech she had quite a few people in that room saying they sure did like the sound of President Winfrey.”

During a political panel discussion minutes later, Stephanopoulos predicted instance success for an Oprah run: “...#Oprah2020, it was all over Twitter last night after that speech. She says she’s not interested at all, but if she were to get in, the next day she’d probably be leading the fight for the Democratic nomination.” Analyst Matthew Dowd quickly agreed: “She’d be leading the Democratic ticket.”

He then observed that Winfrey might not want to step down into the presidency: “I think Oprah has to decide is where her power is, president or as a pastor of the country, and she has to make that decision.” When exactly was Oprah named “pastor of the country”?

That attitude was reminiscent of the kind of fawning coverage the media provided to Barack Obama. In 2009, ABC’s Terry Moran proclaimed: “I like to say that, in some ways, Barack Obama is the first President since George Washington to be taking a step down into the Oval Office.”

Far from done with the Oprah adoration, during the 7:30 a.m. ET hour, media pundit Larry Hackett proclaimed to co-host Robin Roberts: “I think the 2020 presidential campaign actually began yesterday. The idea – we’ve elected a reality television star now, I mean, why is this out of the question? She’s richer than he is, she’s a better TV star than he is, and she knows the American public.”

In the 8 a.m. ET hour, Spencer offered another full report on the Globes and featured this glowing discussion of Oprah with several actresses:

SPENCER: Oprah Winfrey bringing down the house, as she spoke directly to the little girls watching at home....With all of Hollywood inspired by her words.

[TO ACTRESS ALLISON JANNEY] There is a movement afoot back here, Oprah 2020.

REESE WITHERSPOON: It sounds good. It just comes out right.

SPENCER: That was the immediate reaction online, “Just please run.” 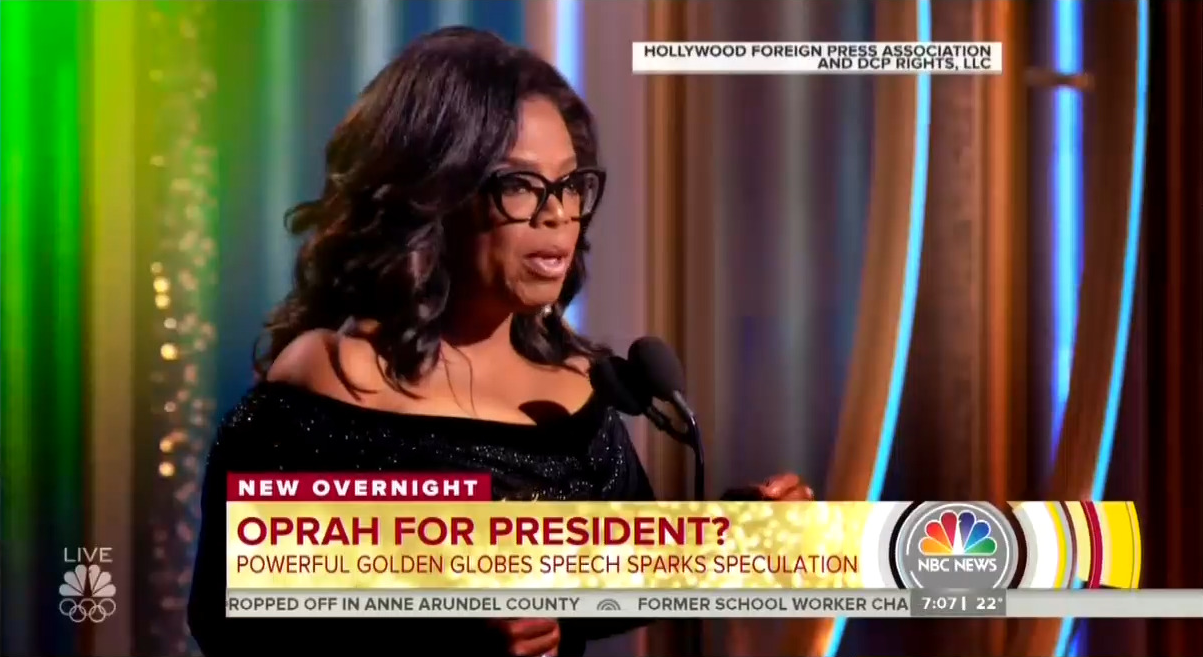 “Winfrey’s comments earning several standing ovations, the all-star crowd captivated by her poignant message of female empowerment....A speech so inspiring, many now calling for Winfrey to add yet another title in front of her name, president, with #Oprah2020 trending on Twitter overnight,” Willie Geist hailed on NBC’s Today show.

Guys, as Natalie said, there were a lot of highlights. One of the most tweeted moments we’ve been talking about this morning was of course Oprah and her acceptance speech for the Cecile B. Demille Award. She had the Globe’s audience on their feet, the celebs were taking to Twitter to share – sing her praises. Let’s get to a couple them. Neal Patrick Harris, he writes, “Oprah is everything.” Actor Ben Platt, “If you need me for the next two years I’ll be drafting tweets in support of Oprah’s 2020 presidential campaign.” Saw a lot of those comments about her running for office recently.

Leading off CBS This Morning, co-host Norah O’Donnell excitedly told viewers that fellow host and Winfrey friend Gayle King was still in Los Angeles after “cheering on Oprah” while attending the awards show.

Fill-in co-host Bianna Golodryga noted how “everyone is still reacting from that speech” and correspondent Kevin Frazier declared that people were “blown away” by Winfrey. Following his report on the Globes, O’Donnell chimed in: “Kevin, we have to talk about Oprah’s speech because there was a lot of reaction that she may run for president in 2020.” Sounding like an adoring fan, he replied: “Well, Norah, I was back in the one-on-one rooms while the speech was going on and I will tell you this, everyone was mesmerized....everyone was locked in.”

During a follow-up segment in the 8 a.m. ET hour, Frazier, like his ABC colleague, talked to one of Oprah’s biggest boosters: “Allison Janney, named best supporting actress as the abusive mother in I, Tonya, admitted she was getting swept up in Oprah-for-president fever.” A soundbite ran of Janney pledging: “I certainly would vote for her, hands down. I would do anything for her, yeah.”

The hosts did acknowledge that during an October appearance on the program Winfrey denied any desire to run for office. Even so, O’Donnell kept hope alive:

Well, there she denied it, “There will be no running for office.” But that speech last night was not only empowering and inspirational, but I thought it also echoed a lot, Hillary Clinton’s concession speech in 2016, when she said, “To all the girls watching out there.” It was a hopeful speech and it was also a historical speech, too.

Golodryga admitted that she felt healed by the speech: “Yeah, I tweeted last night it was like five minutes of desperately needed therapy for anybody who was watching and for those obviously who were there front and center, too.”

That kind of swooning coverage almost makes their worship of Obama look tame by comparison.