NBC: Political Leanings of Debate Moderators ‘Shouldn’t Even Be Brought Up’

On Friday’s NBC Today, the hosts of the 9 a.m. ET hour ran to the defense of NBC Nightly News anchor Lester Holt in the wake of Donald Trump questioning the political views of the presidential debate moderator. Weatherman Al Roker proclaimed: “Lester Holt is moderating it, and if there's anybody who can withstand the pressure and be down the middle and cool and calm and take this thing on, it is Lester Holt.”

Fellow co-host Bill Bush lamented: “And Donald has already tried to disparage Lester, calling him a Democrat and all these things, which he's not.” Roker added: “He’s not.” Tamron Hall chimed in: “And shouldn't even be brought up. I mean, the political registration of a moderator shouldn’t.”

The cast was reacting to an interview Trump had with Fox News host Bill O’Reilly on Monday, in which he said Holt was “a professional,” but that: “Lester is a Democrat. I mean, they are all Democrats. Okay? It's a very unfair system.”

No matter what Holt’s party registration, his liberal bias has been well documented by NewsBusters. In a May 4 interview with Trump, Holt repeatedly hammered the Republican nominee on his rhetoric. Meanwhile, in a sit-down with Hillary Clinton in January, he wondered if the Democratic candidate’s feelings were hurt by voters who thought she was dishonest.

Here is a full transcript of the discussion on the September 23 Today:

TAMRON HALL: The other thing that – this weekend, what do you think the two candidates who are preparing to be commander-in-chief are doing? The biggest day of their lives Monday!

BILLY BUSH: Totally separate. As separate as they are personally, will be their agendas.

HALL: Bingo. Donald Trump planning a rally in Virginia ahead of the big debate on NBC Monday. Hillary Clinton said to be studying. The last debate between President Obama and Mitt Romney drew around 62 million people. This will be aired on all networks, but hosted by our own Lester Holt. What’s your guess? How many people are going to watch this Monday?

BUSH: For blood sport or because we want to make an educated decision about the next president?

ROKER: I think both. You know what? What's interesting, there's a nexus, I think, right here of just pure interest, and people are still – still want to make a decision. And I think that...

HALL: As different as these two candidates are.

ROKER: ...this is the first time in a long time we’ve had such a stark contrast between candidates.

BUSH: Hillary said – she said at a fundraiser out in the Hamptons not too long ago, “I never know which Donald is going to show up.” And I think that’s going to drive a lot of the ratings, too. Which Donald is going to show up? He was on with Bill O'Reilly on Monday and O’Reilly said, “Are you going to get into some of the sexual indiscretions and stuff that you’ve brought up before in the past about, you know, former President Clinton?” He goes, “I don't know. We'll see. I’m going to see how she treats me. If she treats me well, then I’m gonna – ” Which is almost like a veiled threat. If I'm her, I'm sitting there going – she’s got seven people probably playing the role of Donald Trump in debate rehearsal.

HALL: Well, they said she’s preparing for whatever version of Donald Trump shows up.

ROKER: And many of them could.

HALL: All of them could.

ROKER: All of them could at different times.

HALL: The debate is 90 minutes long. And before, with the RNC – with the Republican debates, there were 16 other people on stage. It's just two people for 90 minutes. And apparently the campaigns are trying to get into each other's heads already. Mark Cuban, the owner of the Dallas Mavericks and the certified nemesis – he is the Newman to Donald Trump. He is Newman. And so, Mark Cuban tweeted out that he’ll be on the front row to support Hillary Clinton. So Mark Cuban is on the front row, Chelsea Clinton’s going to be there. The wild card, we don't know of former President Bill Clinton will be there. We do not know that yet, it hasn’t been – 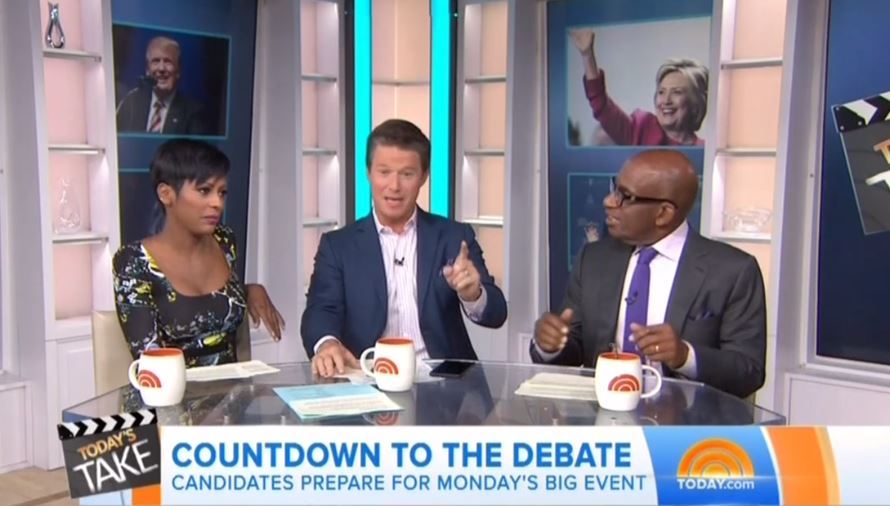 ROKER: Here's the thing I do know. Lester Holt is moderating it, and if there's anybody who can withstand the pressure and be down the middle and cool and calm and take this thing on, it is Lester Holt.

BUSH: And Donald has already tried to disparage Lester, calling him a Democrat and all these things, which he's not.

HALL: And shouldn't even be brought up. I mean, the political registration of a moderator shouldn’t. And I think if all else fails, Lester could break out his bass.

ROKER: Exactly. And play them off.

HALL: Everybody off the stage, just get off right now. By the way, 9 p.m., Hofstra University, Monday night, the world will be watching as Hillary Clinton and Donald Trump face off. Right now, she's ahead in the national polls but it is a tight race. It is – there’s so much movement and we’ll see what happens on Monday.

BUSH: You know what’s going to happen for sure. At the end of it, Donald’s gonna say –

ROKER: “I was terrific.”

BUSH: “According to all the online polls, I won in a landslide.”

BUSH: That’s for sure.