In a desperate attempt to downplay chaos in the Democratic Party following leaked Democratic National Committee e-mails and the resignation of chairwoman Debbie Wasserman Shultz, on Monday’s NBC Today, Meet the Press moderator Chuck actually tried to spin the controversy as a positive: “Look, the only piece of good news out of this for Democrats, Jeff Weaver, Bernie Sanders's campaign manager, told me yesterday the best thing for Democratic unity is her resignation and that actually could calm the waters today.”

After dutifully parroting the liberal talking points, Todd argued: “Without her resignation, today could have been even worse, or is the assumption that today could be worse.” However, he did acknowledge possible lingering Democratic divisions: “Sanders' team may be satisfied that they finally got her resignation, something they’ve been calling for, but I think we’ve got to find out what Sanders delegates are gonna respond.”

Todd went on to warn Schultz against appearing at the convention: “...she may lose re-election. She’s got a primary by somebody who Sanders supported. That moment of being booed at the convention, that’s a TV ad ready to be made. It would be a big political mistake on her part.”

Later in the 7:30 a.m. ET hour, correspondent Peter Alexander – reporting live from the floor of the DNC – repeated the spin:

As for Bernie Sanders, what’s best needed to help unify the party may have just happened, at least according to Sanders’s campaign manager Jeff Weaver. He says that's the resignation of party chair Debbie Wasserman Schultz. That, that having happened may bring Bernie delegates over and make them more inclined to support Hillary Clinton.

Here is a full transcript of Todd’s July 25 appearance on Today:

GUTHRIE: Alright, let’s talk about this whole thing with the emails, some Democratic disarray. The very story line they wouldn't want. Did Debbie Wasserman Schultz – did she have her hand forced, essentially?

TODD: Oh, a hundred percent. You know, I’m old enough to remember when it was the Republicans that had a unity problem. And here we are – 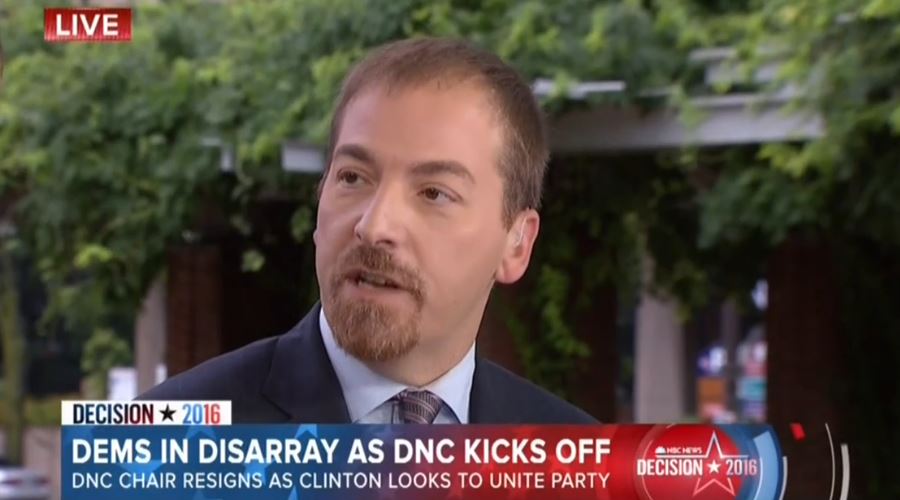 TODD: Yeah, as in last week, right. Look, the only piece of good news out of this for Democrats, Jeff Weaver, Bernie Sanders's campaign manager, told me yesterday the best thing for Democratic unity is her resignation and that actually could calm the waters today. Without her resignation, today could have been even worse, or is the assumption that today could be worse. But let’s see. Sanders' team may be satisfied that they finally got her resignation, something they’ve been calling for, but I think we’ve got to find out what Sanders delegates are gonna respond. And that’s what we’ll find out at 4:00 today.

GUTHRIE: And we don't know yet whether or not she’s gonna gavel in the convention in front of all those delegates, whether she plans to address the delegates still, and you could have a real moment on the floor.

STEVE KORNACKI: Well, that’s the thing. In talking to the Sanders' delegates, and they were out in the streets yesterday, I mean, they are happy that she’s resigning, but believe me, you put her on that stage today, they’re not sitting on their hands. And she said in that statement – and you were just asking Senator Booker about it – she intends not just to gavel the convention to order, but to address the delegates. Now there's still time for her to reconsider, there’s still time for somebody to get in her ear and say, you know, you might want to think about what’s that going to look like. But boy, if she thinks that’s the – that’s what she can get out this, “At least I gave a speech to this convention,” that's going to be a scene.

TODD: By the way, just – she’s got her own – she may lose re-election. She’s got a primary by somebody who Sanders' supported. That moment of being booed at the convention, that’s a TV ad ready to be made. It would be a big political mistake on her part.

GUTHRIE: And for those who are thinking that this is just all inside politics, I mean, what’s the bottom line? If the DNC would had been more impartial, would that have made a difference for Bernie Sanders?

TODD: You know, I asked the Sanders campaign that. I asked Bernie Sanders, do you believe this cost you the nomination? And nobody will go that far. But you know what, go back, remember the primary calendar and the debate calendar and the fact that the Republicans were looking for primetime venues, the Democrats were looking for Saturday morning cartoon venues. I mean, I’m being a little facetious. But you go back there and you can’t help but wonder, if you’re a Sanders person, going, “Geez, what if the debates had been a bigger deal? Could I have maybe gotten traction sooner?” And then you never know.

GUTHRIE: I’ve got 30 seconds, what does Hillary Clinton need to accomplish from this convention? I’ll ask you both, starting with Steve.

KORNACKI: Yeah, well, I mean, now we see today she needs a bounce. Donald Trump it looks like got some kind of bounce. There’s another new poll our in the last few seconds, by the way, that shows a tie race at 42, but at least a small bounce for Donald Trump, maybe a bigger one. She needs to answer now.

TODD: I think it is all about getting these progressives actually semi-excited about her. So tonight –

GUTHRIE: That’s interesting, you see this more as a base election than appealing to moderates?

TODD: Well, now it is. I think at the end of the day it is, because both of them were struggling just dealing with their own bases.

GUTHRIE: Chuck and Steve, we'll have many happy returns this week. Glad to have you here in Philly, thank you. We’re going to have a lot more from this historic city in a moment. And we should mention, NBC News will have live coverage from the DNC. It’s tonight, primetime, 10:00 Eastern.

And one quick note, tomorrow I will be sitting down with President Obama at the White House for an exclusive interview right before he addresses this convention. We’ll have that for you Wednesday morning on Today.