Out of the nearly 15 minutes of coverage the network morning shows devoted to the 2016 presidential race on Monday, only three minutes of that air time focused on the e-mail scandal continuing to plague Hillary Clinton’s campaign.

ABC’s Good Morning America ignored the Clinton story completely. Instead, co-host and Clinton Foundation donor George Stephanopoulos proclaimed: “The race for the White House, now. Your voice, your vote. And it's the summer of Trump, still going strong with a new poll showing him solidly atop the Republican field after stealing the show at the Iowa state fair this weekend.”

CBS This Morning similarly kept the focus on Trump, as fill-in co-host Clarissa Ward declared: “Donald Trump is taking time away from his presidential campaign to report for jury duty. A new poll finds he still leads the GOP field by a wide margin.”

Clinton’s e-mail troubles were briefly discussed – for 1 minute, 15 seconds – at the end of a segment with Bloomberg Politics managing editor John Heilemann:

WARD: John, everybody watching Hillary Clinton obviously very closely. How did she work the crowd? How did she perform compared this last time as compared to last time?

HEILEMANN: You know, she was here on Saturday. And she spent about 90 minutes at the fair. She had a pork chop on the stick, she looked at the butter cow, she did some things. But the problem for her, is no matter what she does, she still has this giant phalanx of people around her. All the security, all the Secret Service. Even when she tries to relate to average voters and tries to get down close to the ground, she still has so much insulation around her that makes her seem removed from voters even when she's trying to get close to them.

CHARLIE ROSE: John, are they beginning to worry about the e-mail investigation?

HEILEMANN: Charlie, I think they've been worried about it for a while and they worry about it more and more. The more that it becomes a story about the FBI, about the FBI investigating in a serious way, it seems like this is going to be a prolonged investigation. I don't think they’re worry that Hillary Clinton’s going to be indicted but I do think they worry that this could stretch on for a lot longer and that there are more trap doors out there. Nobody really knows what's coming within Clinton's campaign and that worries any political strategist just when you don’t know what’s coming down the road.

However, Today did provide the most coverage of Clinton – 1 minute, 47 seconds. At the end of a report about Trump’s interview with Meet the Press moderator Chuck Todd, correspondent Katy Tur noted:

All this as the Democratic front-runner Hillary Clinton tries to reset her campaign while tacking even further left to appeal to voters who may be enticed by Bernie Sanders. Not to mention the threat of a Joe Biden candidacy. Over the weekend, The Washington Times reported at least 60 e-mails on her private account have been flagged as potentially having classified information. After Clinton dismissed the controversy as partisan games in Iowa Friday.

A soundbite ran of Hillary Clinton ranting: “It's not about e-mails or servers either. It’s about politics.”

Lauer then spoke to Heilemann’s fellow Bloomberg Politics managing editor Mark Halperin. While most of the conversation focused on Trump, Lauer did use his final question to wonder about Clinton:

Let me move on to Hillary Clinton, also out there. She’s dealing with the fallout, the continued fallout of the e-mail scandal. She’s got the rise of Bernie Sanders and she’s got some other big names in the Democratic Party at least floating the idea that they might jump into the race. How did Iowans react to Hillary Clinton?

The headline on screen touted a “Hillary campaign reset in Iowa” and asked: “Can Clinton Move on From Email Controversy?”

Halperin acknowledged the seriousness of the scandal, but then assured Lauer that Clinton was “the most likely next president”: 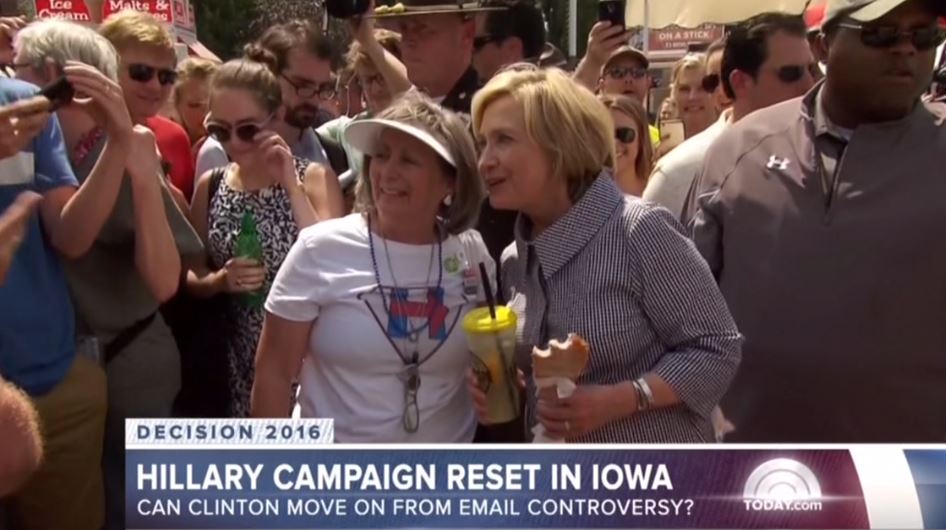 They loved her, too. She got a good reception here. You know, she said Iowans aren’t asking her about the e-mail controversy or about Bernie Sanders. You know, it’s hard to walk up to the First Lady and challenge her on e-mail practices if you’re a citizen. Reporters are still asking, Republicans are still asking. And there’s a lot of unease. I talked to a lot of Democrats here, rank-and-file folks as well as some elite Democrats, who are worried about her e-mail issue.

The Clinton folks can say and try to spin their way and say, “This isn't what voters care about.” She made a joke about it here in Iowa on Friday that some people thought was off-key.

Make no mistake, Matt, I still think she's the most likely next president because she's the most likely Democratic nominee and the Republican race is so scrambled. But underneath her strong poll numbers, there’s a lot of unease in Iowa and amongst Democrats around the country. That’s why you’re hearing so much chatter about, “Will someone else big get in the race?” Although Bernie Sanders has got a pretty big reception here at the fair and he continues to grow and expand. Hillary's people are not underestimating the threat of Bernie Sanders, let alone somebody else getting in the race.