The US or ‘CHOP’? Nets Hide Democrat’s Radical Call to Abolish Police, Prisons 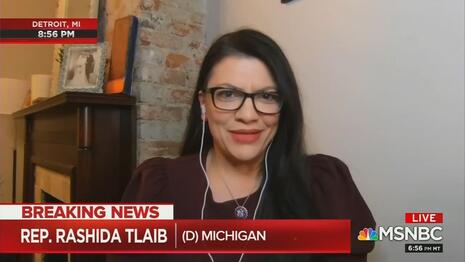 While the media is constantly accusing the right of being domestic terrorists, left-wing extremism is routinely ignored by the media. A Democrat congresswoman’s cry for policing and prisons to be abolished should make the news but as often is the case, it was ignored by ABC, NBC and CBS.

Following the fatal police shooting of Daunte Wright, “squad” member Rashida Tlaib didn’t try to quell the unrest with responsible calls for peace and justice, even as riots erupted in Brooklyn Center, Minnesota and elsewhere. Instead, she threw gasoline on the fire by accusing every police department in the country of being “inherently racist” and demanded they be abolished, despite "defunding" being linked to rising crime.

“It wasn't an accident. Policing in our country is inherently & intentionally racist. Daunte Wright was met with aggression & violence. I am done with those who condone government funded murder. No more policing, incarceration, and militarization. It can't be reformed.”

It wasn't an accident. Policing in our country is inherently & intentionally racist.

Daunte Wright was met with aggression & violence. I am done with those who condone government funded murder.

No more policing, incarceration, and militarization. It can't be reformed.

Tlaib’s tweet sent April 12, has garnered 23,000 likes on Twitter and over 5,000 likes but it drew plenty of outrage too. Still, ABC found time to do several segments on a Bachelor contestant coming out as gay and TikTok stars instead. All three networks ignored the inflammatory tweet on their broadcasts, Tuesday morning through Wednesday morning.

Michigan Republican Party spokesman Ted Goodman also called out Tlaib's hypocrisy in calling to abolish police while she sits inside a fortified and police-guarded Capitol building.

This isn’t the first time the squad’s outrageous comments or actions have been hidden by ABC, NBC and CBS. See some examples we've documented below:

May 2020: ABC Scores Interview With Ilhan Omar, Yawns at Her History of Anti-Semitism, Other Scandals

The tweet, however, did garner the attention of CNN. Morning anchor Poppy Harlow asked Democrat Dick Durbin if the squad “was wrong” about their inflammatory comments, while primetime anchor Don Lemon asked Rep. James Clyburn about Tlaib’s tweet.