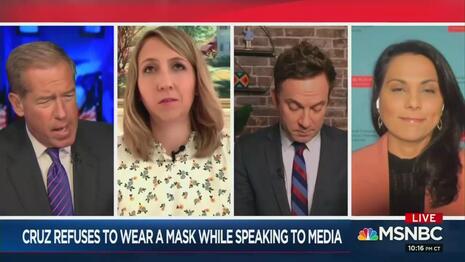 Despite an increasing number of the population being vaccinated every day, the hacks at CNN and MSNBC still haven’t given up mask-shaming. Both networks hosted huffy segments feigning outrage at Senator Ted Cruz for doing something White House Press Secretary Jen Psaki does everyday at the press podium.

Here is the moment that caused silly grandstanding from journalists on MSNBC’s The 11th Hour, Morning Joe, and CNN’s New Day.

A reporter asks Sen. @tedcruz to wear a mask:

“Yeah, when I’m talking to the TV camera, I’m not going to wear a mask. All of us have been immunized.” pic.twitter.com/LTPbfKgJdS

As the senator stepped up to a press podium to speak to the cameras while in the Senate building, Wednesday, one reporter demanded, “Can you put a mask on for us?” As Cruz kindly rebuffed the reporter’s request, saying he was vaccinated, the unnamed reporter tried shaming Cruz with, “It would make us feel better.” Cruz still didn’t cave, which irritated CNN and MSNBC so much they brought on their networks' medical experts to shame the senator.

On The 11th Hour, an exasperated Williams pleaded to MSNBC’s medical doctor to school the “infectious” Cruz on why he was wrong.

“Dr. Bhadelia, you’ve done nothing to deserve this but I want to play for you, I need to play for you, an exchange between Ted Cruz and news media on Capitol Hill today because it deals with medicine and coronavirus,” he sighed. After playing the clip, he snarked:

Doctor, let’s lay aside the infectious charm of Ted Cruz and talk about his remarks on the merits, number one on the fact of common public health courtesy, and two is he right on the facts? He does mirror a discussion that now we are in the age of vaccinations, you do hear in life.

Afterwards, co-host Alisyn Camerota snarked, “Is that true, Sanjay? Is he following CDC guidelines that when you're around a scrum of reporters you don't need to wear a mask?”

As the trio chuckled, Gupta mocked Cruz with, “So charming, right?” He went on to lecture, as the MSNBC doc did, that only when “enough” Americans have been vaccinated, will there be a reduction in mask wearing:

“[H]e could still transmit the virus to somebody else. So when he's not wearing a mask, he's potentially putting other people in that room at risk. It's as simple as that,” Gupta insisted.

On Morning Joe Thursday, co-host Mika Brzezinski also blasted Cruz for “refusing to wear a mask around reporters” yesterday, adding that the CDC guidelines still advise wearing a mask in public if vaccinated. Mean-mugging Mika added, “Thanks Ted Cruz for guiding us to the CDC.”

Yet, the media hasn’t whined at White House Press Secretary Jen Psaki appearing maskless around reporters for the past sixty-something days.

Jen Psaki has been at the White House Press Briefing podium for the past 60 days without a mask. Nothing. Performative bullshit. https://t.co/g3v6xjP6HR

These same silly reporters didn’t whine at their fellow mask shaming reporters removing their masks in the press briefing room, either, so spare us the fake outrage.

New Day's silly performance art masquerading as journalism was paid for by sponsors, CarShield and Select Quote, contact them at the Conservatives Fight Back page here.