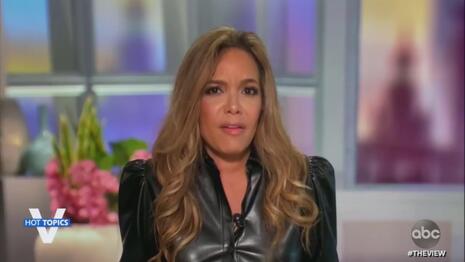 The View co-hosts on Wednesday’s show tried to downplay the idea that President Trump may win the swing state of Florida, because of polls showing Joe Biden is underperforming with Latinos. Co-host Sunny Hostin dismissed the importance of this finding to instead mock black Trump supporters.

Whoopi Goldberg began by asking the panel about the tight race. Co-host Meghan McCain argued that Trump’s messaging on socialism appears to be working for him in Florida. She pointed out how in the Trump leads Biden in the heavily Democratic Miami-Dade county, and Joe Biden is trailing far behind where Hillary Clinton was polling in the state in 2016.

When it was her turn to respond, co-host Sunny Hostin refused to criticize the Biden campaign. She brushed off the numbers as “unsurprising”, because Cubans “do vote Republican.” Rather than talk anymore about that uncomfortable possibility, Hostin went off topic to mock Republicans for thinking they could get any of the black vote. She scornfully added that black conservatives were “props” for Republicans:

I actually wasn't surprised to hear it because Cubans in Florida typically do vote Republican. That wasn't a surprise to me. It wasn't a surprise to me that black voters are overwhelmingly the backbone of the Democrat party, 83%, in favor of Biden. You now you hear all of this from the Trump campaign, black people have nothing to lose, and they are going to overwhelmingly vote for Trump, and you had the black people props all over the RNC talking about all the stuff they've done for the black community. You heard Sarah Sanders yesterday talking about all the things that have been done for the black community by the Trump, you know, administration. They're not voting for Trump. So the poll wasn't really that surprising to me because Latinos have been very supportive, and have voted Republican for quite some time.

“Well, isn't this his home state? They should be voting for him, and he's really on the cusp of losing there,” she said dismissively, before revealing her own condescending attitude towards minorities who support Trump.

Behar sounds like MSNBC’s Stephanie Ruhle who was equally aghast this morning by the polling, after all the hard work the media’s done to demonize the president as an anti-immigrant racist.

The View hosts bigoted attitudes towards black and Latino Trump supporters are similar to the several racist outbursts by CNN journalists and MSNBC hosts during the Republican National Convention at the end of August.

Contact The View's advertisers at their Conservatives Fight Back page here.