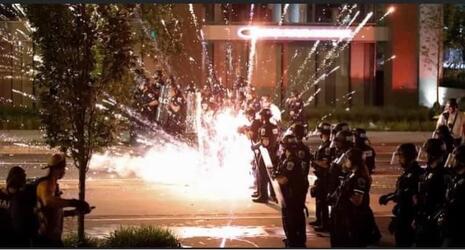 Some media outlets haven’t just been lying about the left-wing riots in Portland and Seattle, now they are even protecting violent criminals from being investigated by law enforcement.

Thursday, a judge ordered five Seattle-based media outlets, including the left-wing newspaper The Seattle Times, to hand over their footage from a violent George Floyd riot on May 30, after rioters stole police equipment, including two guns from police cars, along with setting cars on fire and smashing windows.

You would think journalists would want to help get violent criminals with illegal guns off the street. But for all the media’s talk about ending gun violence, journalists from The Seattle Times and New York Times showed their true colors by defiantly objecting to the subpoena.

We @seattletimes strongly oppose this move by @SeattlePD and this ruling by a King County judge. As I'm quoted as saying in this story, we don’t work in concert with government, and it’s important to our credibility and effectiveness to retain independence from those we cover. https://t.co/MN5RN6mi5i

Another Seattle Times reporter worried this would be reporters' lives in danger (Hey, aren't they "peaceful protesters"?):

This ruling could potentially put my and my Seattle Times colleagues’ safety at risk. https://t.co/yZffIKkGoP

A terrifying court ruling here: A judge in Seattle has ordered that media outlets must turn over images and footage from the George Floyd protests on May 30, so that police can investigate possible crimes. https://t.co/Q7DJcXdLYR pic.twitter.com/TN8P9TxMMO

It’s worth noting that the judge limited both the source---what kind of camera evidence could be obtained (no journalists’ phone footage, for instance) and the scope of it; police could only use what was found to investigate crimes of arson and theft of police property (not vandalism, for instance). Still, the journalists pretended as if they had special privileges that the rest of society does not, by claiming this was a First Amendment issue.

The Daily Caller’s Geoffrey Ingersoll pointed out how their camera crew had no problem handing over video footage of a brutal assault against a black man they witnessed during the infamous Charlottesville violence in 2017. Ingersoll described how that by giving their video to the FBI, four neo-Nazis who beat up the man were arrested and sentenced to prison.

He noted the glaring double-standard that would’ve been media fodder for undoubtedly days, had they done the same thing then that the left-wing paper is doing now:

Now the Seattle Times is refusing to give up footage of felonies in plain view of the public.

I wonder how wider media would have reacted if we did that with Charlottesville? Almost certainly would have interpreted it as a defiant defense of neo nazis.