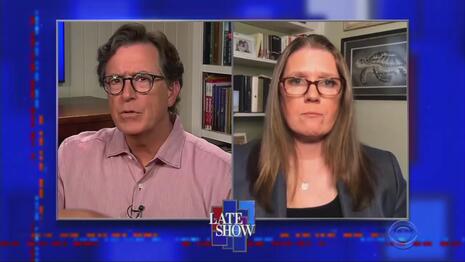 After having a meltdown on live television on election night, Late Show host Stephen Colbert revealed Wednesday that he might still need therapy to recover from the shock he experienced four years ago. Psychologist Mary Trump should’ve been charging Colbert, as the late-night host spent 38 minutes (with breaks) trashing the president and whining about how he's traumatized the country, to Trump's Democrat donor niece.

Mary Trump was there to talk about her gossipy tell-all book, psychoanalyzing the president and the Trump family, of course. But the talk show host showed just how much he lets the president live rent-free in his head by the questions he asked her:

Is there any idea that the last four years are some sort of fever dream that we are all just going to wake up from?

...What treatment do we need? What therapy do we need as a nation to honestly address what happened to us?

...The idea that this is the most important, the most powerful person on the planet only feeds into that, A. a sense of narcissism and B. the protection of all of their behaviors, knowing that when he was elected, was that a chilling moment for you knowing how all of that would be reinforced?”

...Is it odd for you to have this personal and intimate connection with this man who is for better and worse and I'm going to say worse, a transformative, political figure regardless of whether it is a destructive one? Does it seem surreal?

...Is there anything that could be done for the President?

...Have you ever seen your uncle be held accountable for anything?

He also spent time in the pathetic pursuit of digging up more unfounded claims of racism and asking Trump to call her uncle a "sociopath:"

Mary Trump, when were you on Rachel Maddow, you revealed that not only did Fred Senior have anti-Semitic tendencies but you said you had heard the president use the "N" word, are there other groups of people that your grandfather father and your uncle have shown prejudice toward? I mean like old-fashioned kind of European prejudices like Italians no need to apply or the Irish. Are there other groups that have just been singled out? We know what he said about Mexicans, we know what he said about African countries, is this pervasive with everybody who isn't a Trump?

... You say that Fred Senior was a high-functioning sociopath, do you believe that the President of the United States has sociopathic tendencies and if so, is it high functioning?

Will Colbert or the media also do a deep dive into Joe Biden’s family history to find skeletons in his closet? Well considering how the media dismissed and mocked the former VP’s corruption scandal with his son on the board of Ukraine company Burisma and that was recent history, I think we know the answer to that question.

This DNC therapy session was sponsored by Honda and Comcast. You can find their contact information linked.