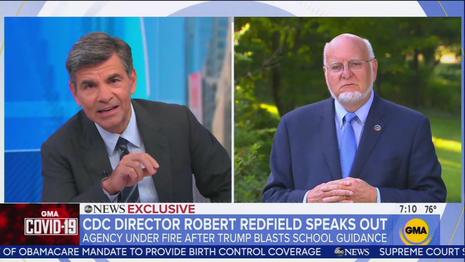 ABC anchor George Stephanopoulos grew increasingly hostile on Thursday’s Good Morning America after he failed to get CDC director Robert Redfield to bash President Trump for insisting we need to reopen schools in the Fall while the country is still dealing with the coronavirus.

After the GMA team sneered that President Trump was “going against the advice of federal health experts” by pushing to reopen schools, Stephanopoulos brought on Redfield with the sole purpose of getting an anti-Trump soundbite from a health official. However, the CDC director frustrated the ABC anchor by not playing politics.

From the get-go, Stephanopoulos encouraged his guest to agree that Trump was putting lives in danger:

Vice President Pence said quite clearly yesterday the CDC is revising school guidelines because the president thinks they are too tough. Should the doctors and scientists at the CDC be taking that kind of political direction from the president?

...The idea is that you should reopen safely. guidelines you had there said kids should be six feet apart and social distancing and there should be no communal spacing. Are you revising any of those guidelines at the direction of the president?

...As you know, Dr. Redfield, we've been down this road before. The president complained about the CDC guidelines for re-opening businesses earlier in the pandemic. The guidelines were revised and we've seen the spike of cases all across the country. Aren't you worried that is going to happen again?

Redfield backed away from Stephanopoulos’s insistence that every school in the country had to follow every single guideline the CDC put forward. He explained how the public health organization was committed to reopening schools safely and they would work with communities to help them find ways to implement these guidelines, not rigid requirements, in a practical way.

After Stephanopoulos blamed reopening the economy for a spike in coronavirus cases, the CDC director pushed back against the journalist’s political agenda: “The one thing I really want to say that would personally sadden me and I know my agency is if individuals were to use these guidances that we put out as a rationale to keep schools closed. As I said the public health interest of the students today is to get the schools reopen,” he explained.

At that point, Stephanopoulos showed his frustration at not getting the Trump-bashing answers he wanted.
He exclaimed, “No one wants to keep the schools closed but everybody wants to make sure they're safe before they are open again. That's what I keep trying to ask you about,” before trying again: “Which of these guidelines are looking to relax? Should students be six feet apart?”

If you thought Stephanopoulos might try to end the interview on a more hopeful note, you’d be wrong. He pushed for a return to strict lockdowns with his final question: “Final question, Arizona, Florida and South Carolina now lead the world in new cases. Are they doing enough to control it? Is it time for more stringent lockdowns?” he insisted.

It’s hard to take Stephanopoulos seriously when he says, “no one” wants to keep schools closed, when he finishes the interview by pushing for more stringent lockdowns. The networks have been practically rooting for the economy to fail, hoping it leads to more climate regulations among other things. At the same time, they’ve censored good economic news to keep up the doom and gloom narrative.

Stephanopoulos’s meltdown was brought to viewers by Dawn Dish soap and Ensure.