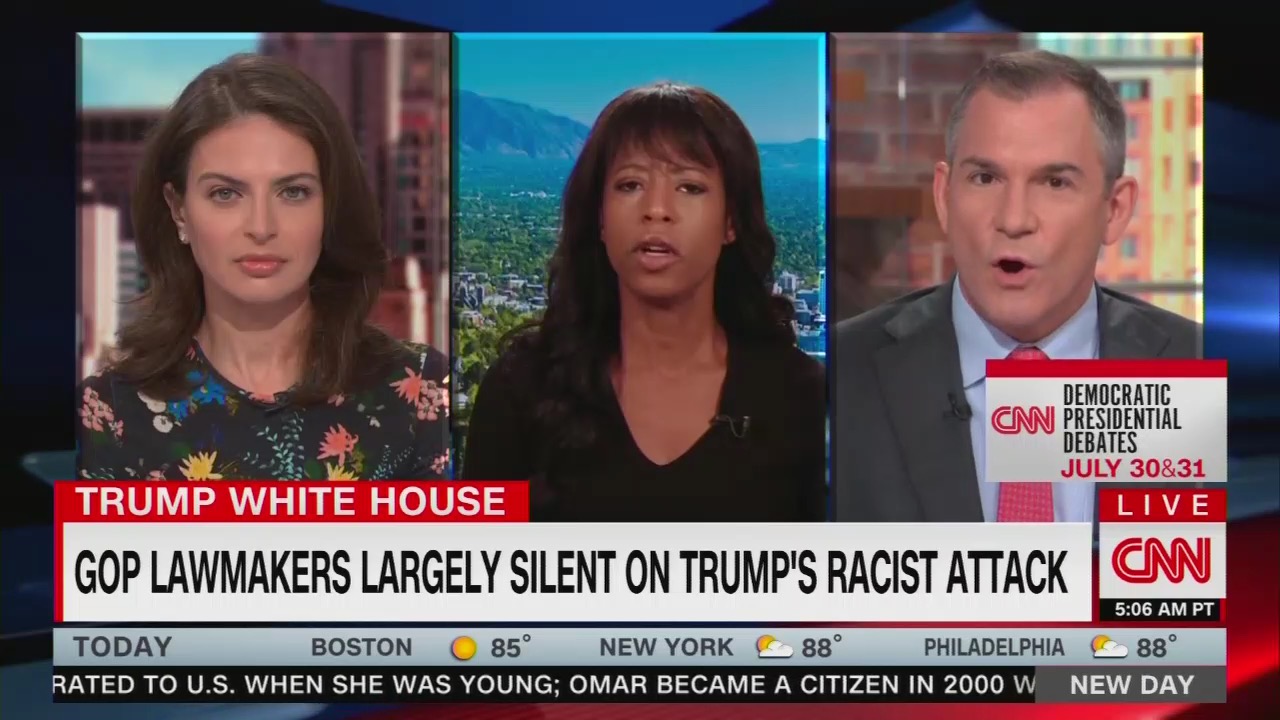 After President Trump got backlash over the weekend for tweeting that four Democrat Congresswoman should “go back” and “fix” their broken countries, CNN’s two hour morning show, New Day picked up the media outrage, Monday. Co-hosts John Berman and Alisyn Camerota repeatedly dared Republicans in Congress to call in to the show and call Trump a racist. Even after some Republicans did come out to condemn the President’s comments, CNN still kept attacking them for not repeating their “racism” charges against Trump.

Former Utah representative Mia Love, a Republican who lost her re-election bid in the 2018 midterms for being critical of the President, was asked to comment. After she criticized Trump’s tweets as an unhelpful distraction, Camerota pressed her to characterize them as racist.

“Just to be clear, do you see those tweets as racist?” she asked.

Love denied the prompt to call the President racist because she wasn’t “in the President’s head,” and she takes that allegation seriously.

At that, CNN analyst and New York Times’ journalist Frank Bruni rolled his eyes and shook his head in disgust. Afterwards, Bruni and fellow analyst Bianna Goldodryga each took their shots at Love for her cautious take.

Bruni came out swinging against Love for “being unwilling” to call out Trump as racist:

All due respect, I have no idea why she's dancing around calling these comments racist. She's no longer in Congress and she still seems unwilling to call out the president's behavior for what it is. Those were racist -- no, please, it’s my turn, those were racist tweets...

An agitated Love cut in to defend herself against his attacks.

I see the bigger issue here. The bigger issue to me is when I go out and see how the world views us, I see the world looking at us tearing each other apart. I'm sorry, don't tell me how I should feel about what somebody says about me because I have grown up as a black woman in America my entire life. I have been taught I do not let anyone make me a victim...

Bruni accused Love of “running away” from calling Trump racist, but she shot back, “I did not run away from it. I do not like using that word-- I'm not going to get into the mind of somebody.”

After that contentious exchange Camerota badgered Love to at least call Trump’s words “racist.” Love conceded that they could “absolutely” be interpreted that way by some but she was not going to do that herself. Bruni went on to slam Republicans as “cowards” who needed to take a “moral stand.”

This is nothing new. In December, an almost identical display happened with Love and the hosts of ABC’s The View. Additionally, when Love took office in 2015, she faced racist attacks from the liberal media for being a Republican.