Cokie Roberts: If Biden Runs, Having to Keep Hands to Himself Will 'Make His Life Absolutely Miserable!' 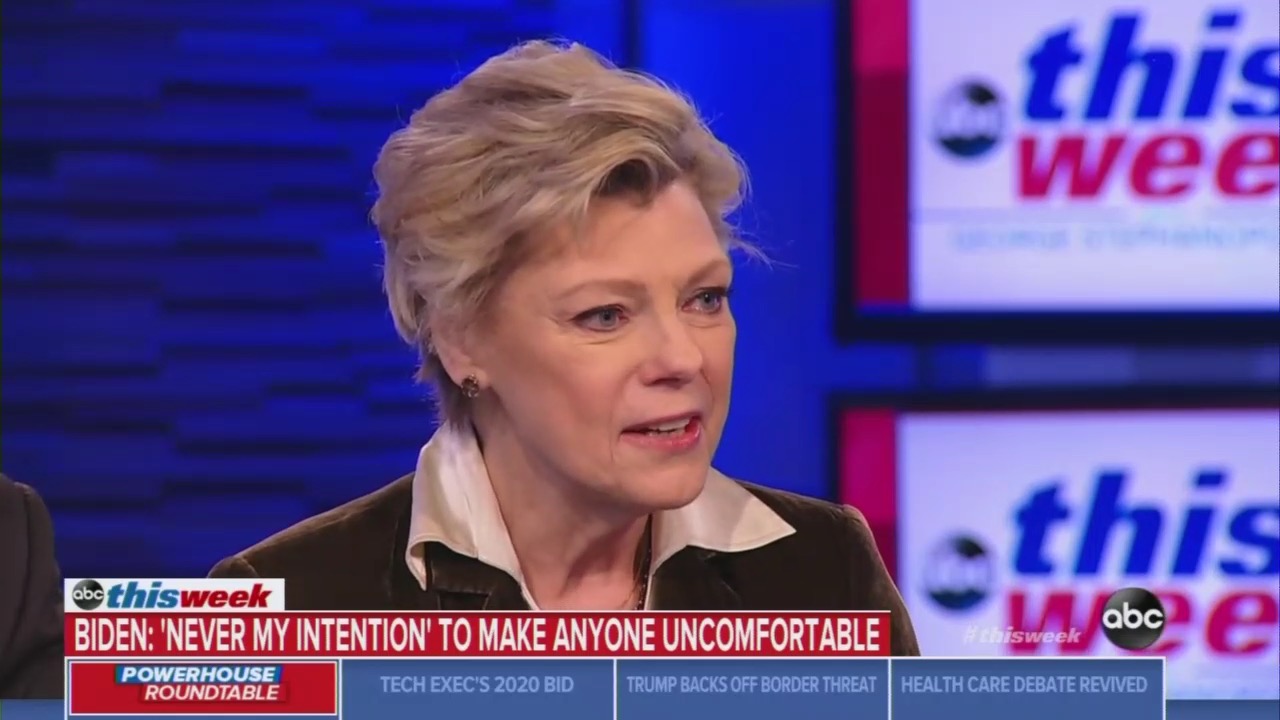 Democrats at ABC’s This Week With George Stephanopoulos were up in arms Sunday about the inappropriate conduct controversy surrounding their favorite, unannounced 2020 candidate, Joe Biden. Veteran journalist Cokie Roberts expressed her frustration that Biden was now being forced to keep his hands to himself, saying that was what was “most appealing about him,” and that having to behave himself would make his life “absolutely miserable.” Woah, calm down Cokie!

But first, anchor George Stephanopoulos introduced his guests which included regular panelists, analysts Matthew Dowd and Roberts. Stephanopoulos turned to her first, lamenting that the whole “political culture” is “trying to figure out exactly what to make of this.” Roberts dove right in, clearly not having any trouble in defending Biden.

Roberts sympathized that he wasn’t being allowed to be a “regular guy” any more and that was going to “break his heart.” She downplayed the numerous accusations of inappropriate behavior leveled against the former vice president as simply a “generational problem:”

If he runs for president, which I think he will, it’s going to break his heart because he’s not going to be able to be Joe Biden. That is the thing that is most appealing about him. How genuine he is. What a regular guy he is. But, every time he tries to be himself, he’s getting himself in more trouble. And it really is a generational problem. Because a lot of young women think this is just creepy and don’t like it a bit. And then when he tries to laugh about it, which is of course the way those of us of a certain age have gotten through life, you know, we’ve all had big tragedies in our lives. We get through it by humor. That is certainly true of Joe Biden. But if he’s not allowed to do that, it’s going to make his life absolutely miserable.

Stephanopoulos agreed, fretting that these rules that everyone else lives by would make him a “less authentic candidate.”

Matthew Dowd added that what Biden is accused of isn’t even close to sexual harrassment and made a dig at President Trump for weighing in. He added to the worry that Biden is being unfairly lumped into the #MeToo cause:

[T]here's no nuance in any of this. It all gets conflated. On the spectrum of things of invading your space and unwanted invasions of space, and then sexual harassment. Which I find it exceedingly ironic that the president even comes close to wanting to weigh in on this. We have an inability to sort of measure this across the spectrum, that there are certain things. And what punishment should apply politically in those. That all the same things, shouldn't be applied the same punishment.