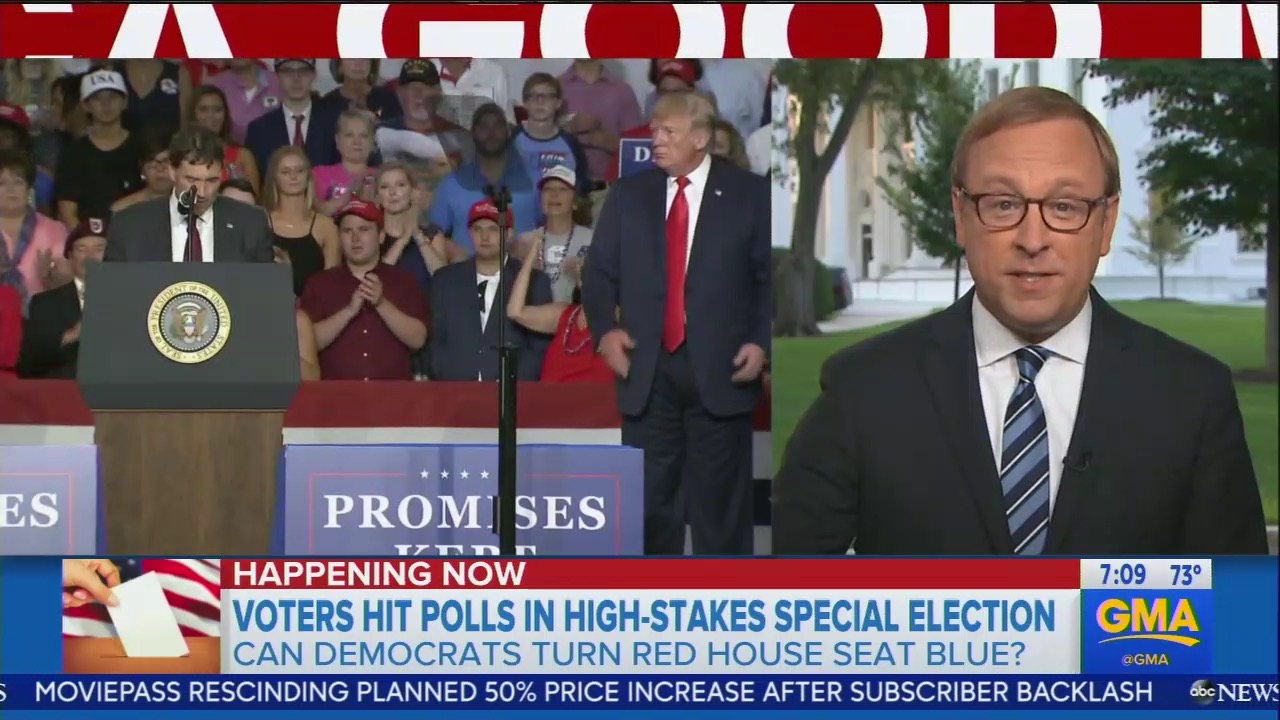 This morning, the big three networks downplayed President Trump’s influence on some big state primary elections happening tonight and instead hoped for a massive “blue wave” to sweep across the nation. ABC’s coverage was the most biased, with correspondent Jonathan Karl gushing that the competition in one state was a “major sign of trouble for Republicans” and a “sure sign” that Democrats had the upper hand.

On Good Morning America, Karl characterized the Ohio primary as a “war” waged by Republicans, desperate to keep the state red. Calling the competition a “major sign of trouble for Republicans,” he claimed that a win in the state for Democrats would be a sign that the whole country would be flipping to blue:

Republicans are waging an all-out war to try to keep this seat. They are outspending Democrats by about 5-1, George, and they have deployed not just President Trump but also Vice President Pence in recent days. The fact that this is even a competitive race is a major sign of trouble for Republicans. As you mentioned, Donald Trump carried this district by double digits. It is also a district Republicans have held for decades. The last Republican congressman in the last race won by more than 35 points, a win here for Democrats would be a sure sign of a blue wave coming in November, George.

Karl and anchor George Stephanopoulos also cast skepticism on President Trump’s endorsement of a conservative candidate, Kris Kobach, in Kansas who was running against the incumbent GOP governor. Calling Kobach an “extremist” on immigration, Karl voiced concerns of establishment Republicans, doubting that he could win against Democrats in the Fall for holding such views, (despite the fact that one of the main reasons President Trump won the election was his strong views on immigration):

KARL: This surprised some of the president's own political advisers. It surprised Republican leaders. He endorsed Kris Kobach somebody who is seen as a hard right conservative against the incumbent governor Jeff Colyer and this has Republicans worried that a victory for Kobach in the primary could pose trouble for Republicans in the they think that Kobach may have a hard time beating Democrats because of his extreme views on immigration. But, George, the president is on a roll with these primary endorsements. He has endorsed 11 Republicans since June. All 11 have won in those primaries.

Over on NBC’s Today, anchor Hoda Kotb also characterized the Ohio race as a litmus test for the entire country’s politics.

“Meantime President Trump's influence is being put to the test in Ohio. Voters are heading to the polls in a key election ahead of the November midterms and Democrats are hoping for a major upset,” she hyped.

When it comes to picking primary candidates Donald Trump has been on a winning streak in his choice, the last nine primaries coming out on top. It's another thing altogether to help those candidates beat Democrats in a general election, with today a key test of the president's power to pull in votes.

It's not just Ohio where they are running to replace that congressman stepping down. Keep an eye on Kansas where there's a Republican primary for governor. President Trump has decided to back a controversial candidate, somebody who has been a loyal ally. That is going to be a tough Savannah and Hoda, maybe another indication whether the president's hot streak will keep up in primary cases.

CBS was more even handed in its approach but was also the only network of the three to tout Ohio Governor John Kasich blasting Trump as an “uninvited” guest to the state, to boost the GOP candidate.

O'Keefe ended his report by also anticipating big wins for Democrats across the nation in these special elections and primaries.

“President Trump won here by 11 points in 2016, so if Democrats somehow pull it off tonight it suggests we may be in for a bigger blue wave than anticipated this Fall,” he touted.