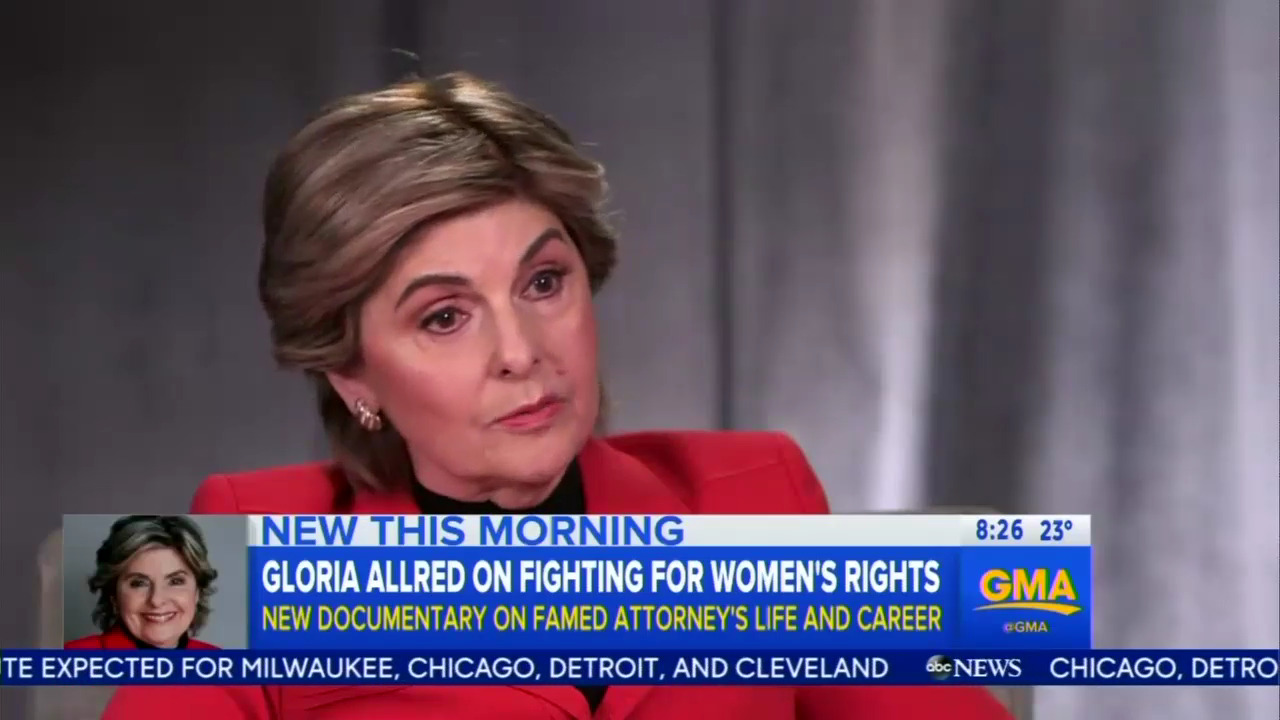 ABC is apparently so devoted to touting liberal icons, that they will promote a competitor’s documentary if it’s about their mutual hero. On Good Morning America, February 9, anchor George Stephanopoulos and Nightline co-host JuJu Chang gushed over Netflix’s new documentary on feminist attorney Gloria Allred, which was released today, saying they “can’t wait” to watch it, before sharing their own interview with the infamous attorney.

While Stephanopoulos called Allred “controversial” leading into Chang’s interview, that was the harshest take the network took on the highly-maligned media figure. Chang opened by touting how “the media savvy powerhouse” used her personal experiences with sexual assault to fuel her “pain and anger” in taking on “powerful men,” like Bill Cosby and President Trump, in “her lifelong crusade for women’s rights.”

To Allred she gushed, “[y]ou were voted most persistent in High School?” adding there were “no better words to describe firebrand attorney Gloria Allred.” Chang followed up by asking Allred what it meant to be a feminist. Allred claimed that if you weren’t a feminist, you were “a bigot,” and her liberal answer didn’t get any pushback from Chang.

Instead, Chang quoted another liberal feminist, Gloria Steinem, saying that Allred had allowed her own “personal pain and struggle” as a “roadmap for her own life's work.”

“There’s a great quote from Gloria Steinem where she says, the final stages of healing are when you can take your pain and help others,” Chang praised.

Showing footage of Allred’s outbursts on television and in press conferences over the years, GMA ended its fawning segment with more raptures.

“After all these decades of fighting, at 76 she's still relentless!” Chang grinned.

Stephanopoulos agreed, gushing, “This has been such a lifelong mission for her!”
The Nightline host agreed, calling Allred “a crusader in every sector,” before the pair raved that they “couldn’t wait” to see the new Netflix special.

JUJU CHANGE: Absolutely. She said she'd rather talk about her clients but shared some very painful traumas actually. Memories of being raped at gunpoint and feeling utterly powerless. But she says she’s learned to take that pain and anger and turn it into a lifetime of social action most famously on behalf of other women, accusing sometimes the very rich, very powerful men, of sexual assault.

GLORIA ALLRED: Women depend on me to be strong.

CHANG: She's among the most famous lawyers in America. A media savvy powerhouse known for taking on high-profile sexual misconduct cases and her lifelong crusade for women's rights.

ALLRED: I think secretly you envy women and you fear them!

CHANG: You were voted most persistent in high school.

CHANG: Perhaps no better words to describe firebrand attorney Gloria Allred. Talk to me about a sort of the bigger question of what it means to be a feminist.

ALLRED: A feminist is simply a person who believes in legal, social, political and economic equality for women with men. So, all of us should be feminists because for me the opposite of a feminist is a bigot.

CHANG: In "Seeing Allred," the new Netflix documentary, we see her using her dogged in your face style to take on deadbeat dads.

ALLRED: We deserve to know if Mr. Cosby is a sexual predator.

CHANG: She represents 33 of his accusers as well as some who accuse President Trump of sexual misconduct. Every press conference she calls, packed.

CHANG: A lot of your critics say, oh, she's so theatrical. She is looking for the spotlight. She's a media hog. How do you respond.

ALLRED: I do believe that women must have a voice in the court of public opinion and I'm dedicated to helping women be able to have that voice. So I make no apologies about that whatsoever because without a voice, they will never ever be able to win their rights.

ALLRED: We have a brain and uterus and they both work.

CHANG: She used her own painful life experiences as a single mother and a survivor of rape and trauma as a road map for her own life's work.

CHANG: There’s a great quote from Gloria Steinem where she says, the final stages of healing are when you can take your pain and help others.

ALLRED: Instead of being stuck in the pain caused by the injustice inflicted on you, take that rage and use it as a source of energy to propel you forward to constructive change.

CHANG: What was your reaction to the #MeToo movement when it started bubbling in the way that it did so dramatically.

ALLRED: We see that women are no longer willing to suffer in silence and there are many people contacting me about what legal action they can take.

CHANG: Is your inbox flooded.?

ALLRED: I can assure you that I'm being contacted by many victims who are making allegations against powerful men whose names have not yet been in the news. Women are now in power and they will never be silent again.

CHANG: After all these decades of fighting, at 76 she's still relentless. One of her favorite sayings is, ‘We’ve only just begun.’

STEPHANOPOULOS: This has been such a lifelong mission for her.

CHANG: Absolutely. A crusader in every sector.