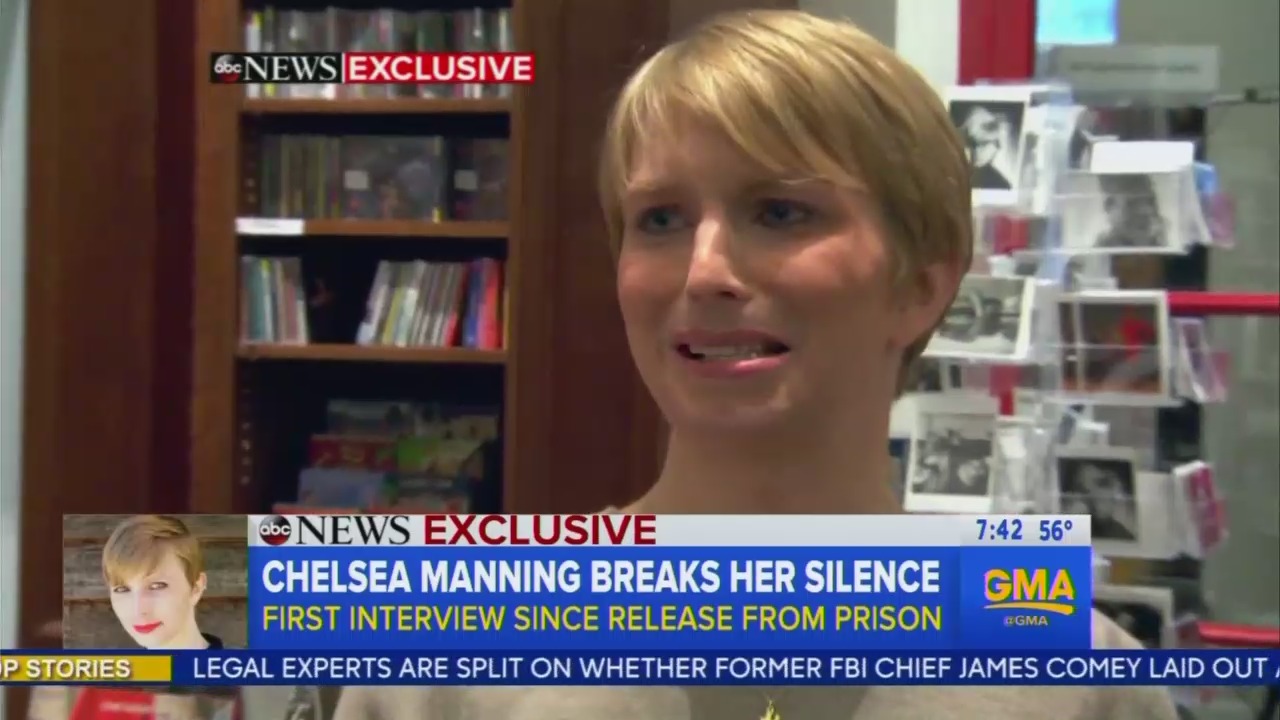 After President Obama commuted the 35-year-sentence of Bradley Manning, (who now identifies as “Chelsea Manning,”) this past January, the now freed, disgraced former army private has plenty of time to speak with the media and give “her” side of the story. Nightline anchor JuJu Chang previewed her full interview with Manning on this morning’s Good Morning America, which portrayed Manning as a “complex” and “heroic” figure instead of a traitor.

Chang introduced her report by calling Manning a “beacon for privacy rights and transgender rights. A hero to many.” Chang did go on to acknowledge that critics call Manning a “traitor.”

Despite serving just serving seven years of his thirty-five year sentence for leaking hundreds of thousands of classified government documents to the website Wikileaks, the largest leak in U.S. history, ABC’s Chang didn’t press Manning too much on this fact. Instead, ABC was more interested in Manning’s transgenderism and the supposedly unjust prison sentence he faced.

Though Chang didn’t shy away from asking Manning about criticism he has faced from the security community, she didn’t press Manning on why just days after being arrested, “he” decided to become a “she.” Chang asked, “What made you decide to come out as trans, after being sentenced?”

“I just had to be who I am!” Manning gushed in response. Chang then goes on to describe how Manning became suicidal, after the Army denied requests for hormone treatments while in prison. The timing of Manning’s arrest and decision to come out as transgender didn’t seem strangely convenient to the network, apparently.

“Fighting for her right to transition, so daunting she says, she tried to commit suicide twice,” Chang empathized.

Towards the end of the interview, Chang sympathetically asks Manning what she would like to say to President Obama for his parting “gift.” A teary-eyed Manning responds, “Thank you. A chance is all I wanted!”

Afterwards, more fawning came from anchors Amy Robach and George Stephanopoulos. Touting Manning serving a longer sentence than any other leaker in history, Chang concluded, “her fight is not over,” describing how Manning was now going to sue for being put in solitary confinement. Chang gushed that Manning was a “[V]ery complex character. She’s a millennial who likes fashion, has hundreds of thousands of fans on social media, but she has those detractors in the intelligence community.”

“What did she say about those seven years in prison, what it was really like for her?” Robach empathetically asked. Chang claimed that Manning was in “despair” after being denied “her right to transition” but after receiving “hundreds of letters from transgender children” every week, Manning continued “her fight” to get hormone treatments.

“What is she going to do now,” Stephanopoulos wondered. Chang described Manning as “wise” for deciding to take a step back and figure out what “issues” she was going to be the “poster child for.”