'I'm Not Going to Really Fall for That:' Omarosa Rejects Dem Talking Points on 'The View' 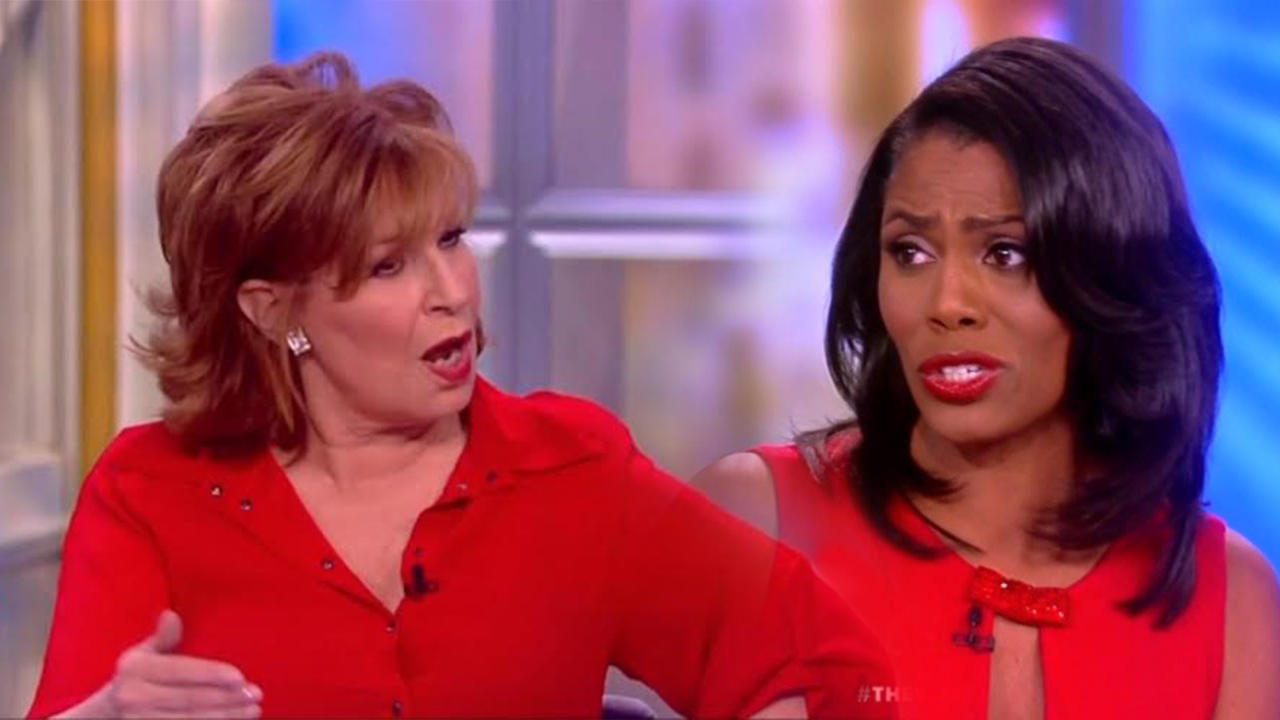 Mid-show Friday, The View brought on Trump’s Director of African-American Outreach, Omarosa Manigault, to talk about Trump’s plans to help the black community. The conversation quickly turned nasty, with hosts Joy Behar and Sunny Hostin repeatedly hammering Omarosa to defend Trump. But Omarosa wouldn’t let the democratic talking points slide, even attacking the panel for not focusing on “real issues.”

The first hostile question came from host Sunny Hostin, who wanted to know how Trump could “understand the black community” if most black women didn’t vote for him. She went on to suggest that Omarosa was a token hire “used” for “optics.”

HOSTIN: Let me finish my question.

OMAROSA: How many questions because that felt three or four.

HOSTIN: The criticism has been that he’s just using you for optics. He doesn’t really care about the black community.

Omarosa pointed out the obvious, that most African Americans vote for Democrats overwhelmingly to begin with, so that Hostin’s question was a moot point:

OMAROSA: Let me answer the first one and then we can go through each step. First of all, African-Americans traditionally vote democratic. Let's establish a historical precedent. They vote for the Democrat 94%, 95%, so that's no different. Donald Trump got 13% of the African-American vote. He doubled what Romney got, and he is very, very excited about engaging with the African-American community. Now, your second and third question I really didn't hear so if you want to go through those again.

Again, Hostin asked Omarosa if she was being “used” for “optics,” a question Omarosa took umbrage at, defending her background.

HOSTIN: The criticism has been in the African-American community that Donald Trump doesn't really care about the community and in fact, he's just using you as optics.

OMAROSA: First of all, no one uses me. No one uses me. First and foremost, let me just tell you a little bit about myself and then you can understand how I got where I am. I grew up in Youngstown, Ohio in the west lake projects, a housing project. So I am the embodiment of the American dream. I grew up on welfare, on section 8 housing. My father was killed when I was 7 years old. I went to public schools, I went to central of Ohio and got to Howard University. So I earned my way to sit in the White House. No one gave me anything, okay?

She went on to state some problems in the black community that the Trump administration wanted to help change and how one of them, violence in Chicago, was a personal one to her, with both her father and brother being murdered. She also mentioned how her family, faith and motivated her to become successful.

OMAROSA: My mother made sure that we were in the church, that Christ was the head of our lives, that education was at the top of every single thing that we did.

Behar dismissively interrupted to say, “Quite common among the black community.”

Later on, Omarosa mocked Behar for being upset at Trump’s win after she spent the past “year and a half” bashing him on the View.

OMAROSA: I think that all have gotten to know him as a business mogul, as --

OMAROSA: Entertainer, a reality star, now as the President of the United States, Joy.

BEHAR: You can't make it up.

OMAROSA: But I know him -- I know it's got to burn your blood.

BEHAR: They say anybody can be President. He proved it. Go ahead.

OMAROSA: It's got to be really-- Joy, I know it’s gotta be really hard after, you know, the last year and a half of all the things that you said about Donald to see him sitting in the Oval Office. I know it's got to be hard for you but I have to tell you---

BEHAR: It is hard. It kills me as a matter of fact. And he loves that.

OMAROSA: I know it does. Here's the great thing. You all know him as the president. I know him as a friend. I know his heart. I know the things that he's seen and has never been reported on and probably folks won't ever talk about.

Hostin then asked if Trump was responsible for causing the “divisiveness” in the country to which Omarosa shot back, “But don’t you think the media contributed to that?”

Later on, Behar asked if Hillary Clinton would’ve won the election, if there are really three million votes that didn’t get counted. Omarosa dismissed the question as a media obsession:

OMAROSA: I'd like to continue to talk about the election. It amuses me but the truth is --

BEHAR: It amuses him too.

OMAROSA: We have real issues and there are real Americans who have problems that we have to address.

OMAROSA: You all can sit at the table and continue to talk about those things in the media but we have a job to address-- we have a job to make sure the American people have exactly what they need.

After the panel talked over each other, shouting out questions about Trump’s various controversial statements, she responded, “You all can keep throwing things at me, I’m not going to really fall for that.”

The end of the interview ended contentiously with Omarosa making a dig at Joy while pointing out her fiance in the audience.

“I'm so happy that he's here with me and he brings me such joy. And I hope that you one day can find that kind of joy, Joy, in your life,” she snarked to the visibly uncomfortable panel.