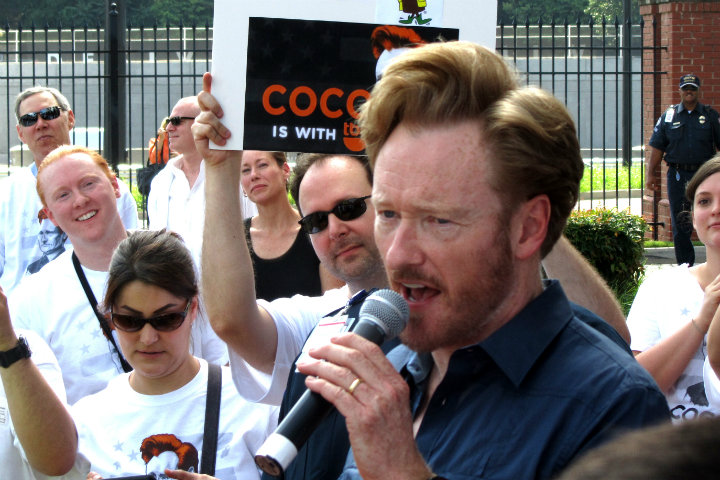 “I am not a pundit, I am not an expert and I've always, always made it a policy to stick to my job, and keep my opinions to myself,” late-night host and comedian Conan O’Brien stated on his June 13 show on TBS. Ironically, right before giving his half-informed opinion on guns and “assault weapons,” (which the media adored.) Despite claiming to keep his opinions to himself, Conan's comedy routines on TBS have always leaned left and unfairly smeared conservatives. Below are just a handful of the times he didn’t pretend to be unbiased.

As a black conservative, former GOP presidential candidate Ben Carson earned special scorn from the left for his views. Conan used this alone to smugly insult Carson’s intelligence, calling him “the only African American who wants to go back to the way things were 200 years ago,” because he was “an African American and also a member of the Tea Party.”

The liberal comedian continued to mock Carson’s association with Tea Party because “as a neurosurgeon, who's also a member of the Tea Party, Carson's specialty is removing that part of the brain that believes in climate change.”

In an August of 2015 show, Conan made a crass joke about both GOP presidential candidates Ted Cruz and Donald Trump, saying essentially they would’ve been aborted had their mothers had the chance.

On two different programs, Conan made jokes about Trump being like 20th century dictators. He joked that Donald Trump reminded him of Italian fascist dictator Benito Mussolini in the way he sculpts his hair and interacts with crowds.
“I like that Mussolini thing he does,” he stated. On another show Conan joked that Trump wanted to be like Hitler, saying “Germany hasn't had a great leader since the 1940's.”

“Who the Hell is Elisabeth Hasselbeck to Ask the President a Question?!”

In 2012, Conan played a clip of lone conservative panelist on The View, Elisabeth Hasselbeck asking President Obama a question about the economy when he was on the show. Immediately afterwards, Conan bashed Hasselbeck for even being allowed to comment or talk to the President in the first place. (As if the rest of the panelists on the show had extensive, hard-hitting journalism experience and as if that was necessary to ask a serious question the President or audacious to even do so.)

“Who the hell is Elisabeth Hasselbeck to ask the President a Question?!” He asked, with input from sidekick Andy Richter. “Hey, leader of the free world! Answer this!” Conan mocked.

In 2011, the liberal comedian actually officiated a same-sex wedding on his show, which of course earned him adoration and glowing words from the media. As his left-leaning activism, even cloaked in comedy, always does. Even NBC Nightly News applauded for Conan’s “serious moment” in getting political on guns, on their Monday night broadcast. If even Conan admits he is “not an expert” why, exactly, is his opinion on public policy being given weight? So much for “straight news.”

But he isn’t the only one. Conan follows a pattern for late-night comedy hosts, whether it’s mocking Ted Cruz as anti-immigrant or stupid or attacking Carly Fiorina as an ice queen.By contrast, Hillary Clinton gets the star treatment with softball interviews and fawning questions like, “Do you have too much experience” to run for President?"