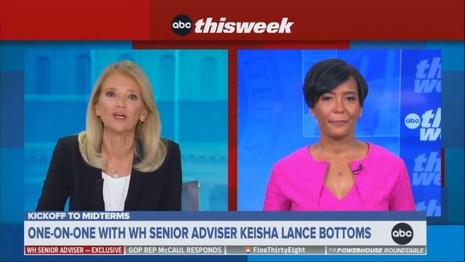 On Sunday’s edition of This Week on ABC, co-moderator Martha Raddatz was forced to challenge White House senior advisor Keisha Lance Bottoms on President Joe Biden’s totalitarian speech on Thursday night in Philadelphia in which he accused half of his fellow citizens of being domestic terrorists and a threat to democracy. Despite normally being a Democrat Party mouthpiece, Raddatz knew Biden was so out of line, that she would’ve lost what little credibility she has left if she didn’t challenge his top advisor.

Raddatz wasted no time cutting to the chase with Bottoms. Right off the bat, she noted how prior to the speech the White House “was insistent the speech would be optimistic” and would seek to bring people together. Yet in it Biden said that Trump's MAGA supporters are a danger to democracy,” Raddatz noted. Asking “how is that a unifying message?”

Of course, Bottoms had no coherent response. Instead, she claimed Biden was simply “remind[ing] the American people of who we are as a country.” And insisted that despite the fact that the United States isn’t a democracy, and instead is a constitutional republic, she still proclaimed that “we have to call out this violence and if we don't our democracy is in danger.”

Raddatz later asked if Biden had “essentially given up on those MAGA Republicans?” Who she noted constitute “some 70 million people” in the United States.

Getting to the heart of the matter, Raddatz challenged Bottoms to explain what Biden “has he done really to unify this country?” She then noted the “remarkable numbers”, from a recent Quinnipiac poll in which “69 percent of both Democrats and Republicans believe democracy is in danger of collapse but the Republicans blame Joe Biden and the Democrats blame Donald Trump.”

In response, Bottoms claimed Biden “can work with mainstream Republicans to get things done on behalf of the American people,” it’s just these “MAGA Republicans” who Biden refuses to work with.

Later on Raddatz returned to an ongoing issue of Democrat Party operatives and political PACs meddling in Republican primaries to help nominate candidates they perceive as being the most beatable in a general election. After reading a statement from liberal Maryland Republican Governor Larry Hogan who decried the Democrat scheme, Raddatz asked Bottoms “should the President speak out against members of his party who have boosted these so-called extreme candidates?”

After a follow up question from Raddatz about whether Biden supports his party propping up “MAGA Republicans” in GOP primaries, Bottoms played dumb: “I cannot speak to what the President supports.”

This segment was made possible by Verizon. Their information is linked.

To read the full transcript of this segment click “expand”:

MARTHA RADDATZ: Ahead of the President's speech, the White House was insistent the speech would be optimistic, was about bringing people together, yet in it Biden said that Trump's MAGA supporters are a danger to democracy. How is that a unifying message?

KEISHA LANCE BOTTOMS: Well, what the President was that he reminded the American people of who we are as a country. We are a democracy that's been built on the rule of law, we're a democracy that values the peaceful transition of power, we are a democracy that values the right of people to go and vote safely and in peace, and so what the President has done as our commander in chief is he has reminded us that democracies are fragile, you know this, you've been across the globe, and if we're not intentional about preserving who we are as a country, if we're not intentional about reminding ourselves that there is a rule of law in this country, then we will be in danger.

RADDATZ: Whatever he said the Institute for Strategic Dialogue which tracks hate speech said after the Biden speech there was a surge online and conversations that said Biden's remarks singling out MAGA Republicans was interpreted as a declaration of war against conservatives and all the Trump voters.

BOTTOMS: Well, what I would say to that is that this is what this MAGA agenda has been all about, it's been about distorting the truth, it's been about misleading people, it's been about putting out information that inflames people. And I just encourage people go to the White House website, whitehouse.gov, read the speech for yourself, I've read it multiple times. And what I see in this speech, I see words of encouragement, I see optimism, I see a commander in chief who's calling out to all of us no matter our political affiliation --

RADDATZ: All of us? He wasn't calling to the MAGA supporters certainly, he mentioned them more than a dozen times as a threat to democracy. Has the President essentially given up on those MAGA Republicans? Some 70 million people?

RADDATZ: How has President Biden bridged the divide? What has he done really to unify this country? The latest Quinnipiac poll has some really remarkable numbers, 69 percent of both Democrats and Republicans believe democracy is in danger of collapse but the Republicans blame Joe Biden and the Democrats blame Donald Trump, again, how has Joe Biden helped bridge that divide?

And I’ll just remind you of the words of Martin Luther King Jr. When he said that it's not the words of our enemies that we will remember it's the silence of our friends and what the President has said is that mainstream Republicans, independents, Democrats, can all come together, we've seen us come together, to do what's right on behalf of the American people, but if people are silent then the very core of who we are as a country is in danger.

RADDATZ: The President criticized MAGA Republicans for electing election deniers, yet Democrats are promoting far-right candidates in GOP primaries, Maryland Governor Larry Hogan tweeted in response, if President Biden is truly serious about threats to democracy then he would condemn the tens of millions of democratic groups who have spent money promoting extremists, threatening democracy. Obviously in the end they hope that Democrats will win that's why they're spending that money. But should the President speak out against members of his party who have boosted these so-called extreme candidates?