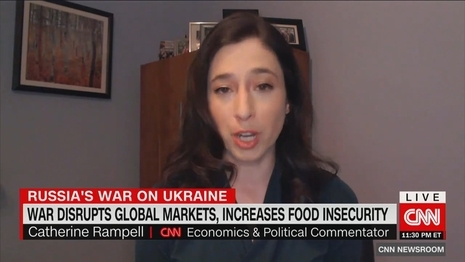 The leftist media really doesn’t want you to vote out Democrats over inflation and gas prices in the upcoming midterm elections. This has been a recent theme in their coverage in recent months. They finally acknowledge inflation is bad but they take issue with you holding their party accountable for spurring it.

The most recent example of this is a column from The Washington Post’s Catherine Rampell where she bemoans the fact that voters appear poised to oust the Democrats over sky high inflation and record gas prices.

In her piece titled “Here’s what voters will get if they cast their ballots based on gas prices”, she opens by whining “Americans are mad about inflation. They’re especially outraged that gasoline averages $5 per gallon nationwide. And history suggests they may act on that furor by voting the bums out. But voters should think carefully about what they’ll get if they cast their ballot based on gas prices.”

Rampell put her own spin on the common “Republicans pounce” line by bemoaning how “Republicans hope this widespread confusion will turn the midterms into a referendum on painful economic conditions and, by extension, Democratic leadership.”

She admits that the White House and Congress have few tools to lower inflation and gas prices aside from “boosting oil production or moderat[ing] overall inflation.” Which she falsely adds “won’t make a huge dent in price growth, but they could help a little on the margin.” Continuing on her excuse tour, Rampell falsely claims “these are not the things that either party is proposing right now.”

In a half true statement, she writes neither party “has a serious plan for dealing with inflation overall or gas prices specifically.” This is half true because Republicans in Congress have urged the Biden administration to drill more to ramp up supply and in turn lower prices.

In the last portion of her piece, she delusionally attempts to make the case that voters should look past the fact they can’t afford to buy groceries or fill up their cars, and instead remember that Republicans will enact their scary agenda if elected: “Republicans seem to care about tax cuts for the wealthy and corporations. They want to find ways to repeal Obamacare, or otherwise reduce access to health care by (for example) slashing Medicaid.”

She fearmongered about the GOP agenda if they win control of Congress, claiming: Republicans care about “installing judges who will roll back reproductive rights (...) And they care about undermining the integrity of our election system and overturning the will of the voters, if and when vote tallies don’t go their way.”

Rampell ended by admitting she understands “voters are angry about gas prices and frustrated by some of Democrats’ recent policy choices” but fears “the much worse policy choices looming in the years ahead if Democrats don’t get their act together — and effectively cede the agenda to Republicans.”