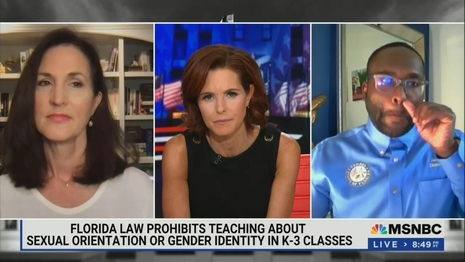 Over twenty-four hours after Florida Republican Governor Ron DeSantis signed the Parental Rights in Education bill into law, MSNBC is still melting down over the fact that DeSantis and Florida Republicans dared to introduce the legislation which would prevent children ages four to eight from being taught about sexual orientation or identity, with The 11th Hour host Stephanie Ruhle lying about the purpose of the law.

Ruhle started off the unhinged segment by reading from the text of the bill. Despite doing that, she still didn't understand what the law does: "the law also prohibits classroom discussions about sexual orientation or identity. So it's not just instruction, it's any discussion at all. So does that mean a third-grader with gay parents can't talk about her parents in class?" Ruhle asked.

The unhinged host continued huffing over the new law:

Since the law gives parents the right to sue if they're unhappy with what they believe their kids are being taught. This is where don't say gay comes from. Fear that even saying the word, raising the topic, could put the school in real trouble. And if adults are afraid to speak, kids will be too.

She then turned her ire on DeSantis spokeswoman Christina Pushaw for accurately describing the law and noting the only possible reason Democrats could be against the ban on teaching young children about transgenderism:

Senator, Governor DeSantis's spokesperson, a government employee tweeted this, quote “if you’re against the anti-grooming bill, you are probably a groomer, or at least you don't denounce the grooming of 4 to 8-year-old children”. How insidious is it, for a government employee to equate the mere acknowledgment of LGBTQ identities to child abuse? How hurtful is that to hear?

Later on, Ruhle wailed about a provision which was in the original legislation that would allow parents to sue school districts if they didn't stop teaching sexually inappropriate topics to their children. She wondered if it could "bankrupt a school district within months?"

Ruhle subsequently ended the segment falsely claiming "there are no schools actively teaching kindergarteners how to identify their sexual orientation."

This meltdown by MSNBC's Stephanie Ruhle was made possible by Progressive. Their information is linked.

STEPHANIE RUHLE: Welcome back, tonight, a closer look at the so-called parental rights in education bill in Florida, that the Governor has signed into law. Or as critics call it, don't say gay. So which is it? A narrowly focused law giving parents more control in their kid’s education, or an overly broad mandate with an intentional chilling effect on talking about LGBTQ issues at all. Well, for facts sake, let's see with this bill actually says. First, it prohibits schools from teaching about sexual orientation or gender identity to kids from kindergarten through the third grade. But it also adds, or in a manner that is not age-appropriate, or developmentally appropriate for students in accordance with state standards. So what’s age-appropriate? What are those state standards? Well, It's unclear.

Adding to the confusion, the law also prohibits classroom discussions about sexual orientation or identity. So it's not just instruction, it's any discussion at all. So does that mean a third-grader with gay parents can't talk about her parents in class? Since the law gives parents the right to sue if they're unhappy with what they believe their kids are being taught. This is where don't say gay comes from. Fear that even saying the word, raising the topic, could put the school in real trouble. And if adults are afraid to speak, kids will be too. And I want to be clear, there is nothing shameful about being gay, or transgender. But being forced to lie about themselves or their families will put LGBTQ kids in a risky position. They will feel like there is something wrong with them, and that is what's scary. We know that LGBTQ kids are already four times more likely to consider suicide than their peers. And as New York magazine puts it, this bill isn't don't say gay, it's don't be gay or trans. So let's discuss. Mary Ellen Klas, the state capitol bureau chief for the Miami Herald, and former teacher turned lawmaker Florida state Senator Shevrin Jones, he is the state’s first openly gay Senator. Mary Ellen, you've reported extensively on this. Am I getting all of it right?

MARY ELLEN KLAS: Well, yeah, there are many provisions here. It is intentionally written vaguely, but that is because they have a rulemaking process that the Secretary of Education, yesterday, said is going to be used to help give teachers some guidelines. So whether or not those guidelines do help teachers figure out what is acceptable to say in classes, is yet to be determined.

RUHLE: Senator, every state has all sorts of issues they need to address. What was happening in Florida, that was so problematic, that Republican lawmakers needed to prioritize this issue, and pass it into law?

SENATOR SHEVRIN JONES: There was nothing, the Governor and my Republican colleagues continue to make non-issues issues within the state of Florida. Governor DeSantis wants to continue this national agenda, with things like CRT and the don't say gay bill, and make it known the top issues, continually forgetting about the kitchen table issues that we need to be talking about within the state of Florida, like the property insurance, like the rent crisis that we’re having right now. And this is what's happening nationally, in more states than just Florida.

RUHLE: Senator, Governor DeSantis's spokesperson, a government employee tweeted this, quote “if you’re against the anti-grooming bill, you are probably a groomer, or at least you don't denounce the grooming of 4 to 8-year-old children”. How insidious is it, for a government employee to equate the mere acknowledgment of LGBTQ identities to child abuse? How hurtful is that to hear?

JONES: Well, you know what. Not only is it hurtful, it’s disingenuous to a state with 22 million people which is a melting pot of all types of different nationalities, people from different backgrounds. But in the final days of session that we just wrapped up early last week, many on the other side, they said the quiet part very much out loud. The opponents of as you just made mentioned of, we were called groomers by the Governor’s spokesperson. He didn't even think to correct as a matter of fact he doubled down on that word yesterday at his press conference. Basically is a codeword for a pedophile, they even said that schools are socially engineering children. The Florida family policy council president called this a don't turn my son into a daughter bill. This is what we’re dealing with in Florida, and this is the tone that Republicans are saying across the country. And I believe that when you’re in distress, you become desperate. And this is the Republican's last-ditch effort, realizing that the state, the country is going in a totally different direction than they are.

RUHLE: Mary Ellen, the way this law is written, it calls on parents to sue the school districts at taxpayers' expense. Could that not bankrupt a school district within months?

KLAS: Well, I spoke to a lawyer who represents about 17 school districts in the state. And, he’s pretty confident that this is actually not something that we are going to see a lot of. And part of it is they did modify the bill and included some provisions that allow parents to bring their concerns to the district, and then if the district doesn't respond they have an opportunity to go to the board of education and they can hire a lawyer and file a lawsuit. And yes, the cost of the lawsuit against the school district and the attorney's fees will be borne by taxpayers, however, if the case is dismissed in two years, there are no damages but there will be attorneys fees.

RUHLE: Senator, I want to be really clear to our audience there are no schools actively teaching kindergarteners how to identify their sexual orientation. So, for people who want this bill to protect their kids from these teachings, there's nothing to protect against. But tell me, what does this do to children of gay parents?

JONES: Yeah, well first of all I think, let's be clear the Republicans they knew exactly what they’re doing. They are discriminating against marginalized people and they're doing it all in the name of parental rights because they believe it works. Here's what I will say, the same is true for LGBTQ parents who are more often than not helps for communities-- as a matter of fact teachers are the first responders when we go into the classroom. They have things that students share with me that they just wouldn’t have shared with their parents because they don't have that trust factor. It is the nucleus, a real support system that connects other parts of our broader communities. That is why children should be going to school to share about their families. Families might not look like the family of their classmates, but every family is unique, and every family is different. And children should be able to know that. And teachers should be able to teach children to show them that families come in many different colors.

RUHLE: It is hard enough to be a kid, you shouldn't have to hide who your family is.