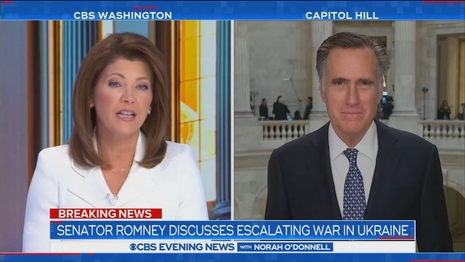 On CBS Evening News, O’Donnell opened her interview with Senator Mitt Romney (R-UT) by asking him if Putin “could try to upstage him [Biden] and launch a deadly attack on Ukraine's capital of Kyiv?”

Romney didn’t seem to share her concern about a potential split-screen moment that would distract from Biden’s speech. Instead, he said that there's “no way of predicting what kind of illogical things Vladimir Putin will do.”

However, Romney said he doesn’t “rule anything out.” He additionally predicted that “it's more likely that we're gonna be focused on our country and what President Biden has to say about how we're gonna rethink the commitments and the priorities we have in our country.”

At the end of Holt’s interview with Klain, he asked:

Depending what happens in Kyiv tonight, could we be looking at a split-screen moment? Is there concern Vladimir Putin might wanna upstage the President?

If anyone would be concerned about this possibility, it would be Klain, yet he didn’t appear to be worried. Klain instead turned to focus on Putin and his aggression towards Ukraine: “I care less about what hour of the day or night this happens, and more about the fact that what Vladimir Putin is doing in Ukraine is wrong and that's why the United States has assembled this amazing coalition led by President Biden.”

You can bet that if a Republican was President today, O’Donnell and Holt would not be worried about the President getting upstaged. Instead, they would hope for it.

This segment of CBS & NBC worrying more about the Biden getting upstaged than they are about the suffering of the Ukrainian people was brought to you by CarFax on CBS & Liberty Mutual on NBC. Their information is linked. CBS has also asked that you text Norah O’Donnell and tell her what you think about her biased coverage: (202) 217-1107

Read the relevant transcripts below:

NORAH O’DONNELL: With the President speaking there on Capitol Hill tonight, are you worried that Vladimir Putin could try to upstage him and launch a deadly attack on Ukraine's capitol of Kyiv?

LESTER HOLT: Depending what happens in Kyiv tonight, could we be looking at a split-screen moment? Is there concern Vladimir Putin might wanna upstage the President?