Host Chris Hayes had another meltdown on MSNBC's All In Tuesday night. This time over Republican’s so-called “war against democracy” that only exists in the left-wing anchor's wild imagination. Hayes went on a wild rant in the wake of Senate Democrats' failed attempt to hijack the entire electoral system.

He returned to a familiar liberal lie: Republicans want fewer people to vote! During Hayes’ hysterical rant he continued to propagate the proven lie that Republican legislatures in states all over the country are passing laws to prevent people from voting. This is obviously not true, as NewsBusters has previously addressed. But the truth has never been Chris Hayes’ strong suit.

The factually challenged MSNBC host harkened back to the 2020 presidential election’s record high turnout to make the case why Republicans want to limit further voter participation in elections going forward:

“Now, rather than looking at that outcome and thinking, wow, we could be a competitive party even in high turnout elections, which would have been a totally rational conclusion. Republicans said, no, oh, God, never again. We want fewer people to vote. We need to do everything we can to manipulate the very mechanisms of American democracy to give ourselves a competitive advantage, or it's over for us. But of course, Republicans view that, you know, expanding voter access, in the aggregate, as a purely partisan exercise. And think of this. That is because in their heart of hearts, in their deepest souls, they do not trust their own message enough to appeal to a majority of Americans in a high turnout election.”

It’s ironic that leftists like Hayes say Republicans don’t believe their ideas will win. If Hayes and his party are so sure that’s the case, why do their allies at Google, Twitter, Facebook, and all the other tech tyrants spend so much time and energy censoring or banning conservatives from their platforms? If conservative ideas are so terrible, then surely they would be allowed to be heard so that voters run into the arms of Democrats.

The truth is they know conservative policies work. That’s why they are accusing Republican legislatures of doing the exact same thing that the so-called “For The People Act” would do, meanwhile letting their buddies at big tech censor and deplatform conservatives so nobody can hear what they have to say.

Always remember what the late great Rush Limbaugh used to say: the left always accuses their opponents of doing what they themselves are guilty of.

This latest example of liberal media spin was endorsed by Lexus and Noom. Let them know how you feel about them endorsing this content by visiting our Conservatives Fight Back Page here.

Read the transcript below by clicking "expand"

All In With Chris Hayes 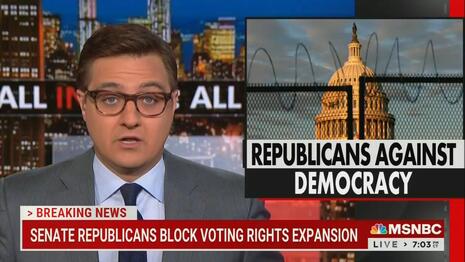 CHRIS HAYES: Good evening from New York. I'm Chris Hayes. It was a very, very big day for the future of American democracy. We will get to that significant action in a moment, but before we do, just give me a second here to go back to the context of what happened in the last election. Because, I think, honestly, I think it has been obscured by the sabotage and the disinformation and of course the violent insurrection, unlike anything we've really seen in the history of the country stoked by the former president. Remember this, last November, right, once in a century pandemic, we got a glimpse of what a full or fuller participation version of our democracy would look like because due to that pandemic, state after state, jurisdiction after jurisdiction, and I should note this is both Democratic and Republican -- there were some fights over this. But across the board, more or less on the whole in the aggregate, all these places did something praiseworthy and novel. They took steps to make it easier to vote. They did this by expanding eligibility for mail-in voting and early voting and adding drop boxes for ballots.

There's a public health concern. You don't want everyone crowding in on election day. So, people found ways to make it easier to vote so you wouldn't have that. And the results were clear. It worked. Turnout was the highest it had been in 120 years, nearly 67% of eligible voters casting a ballot. And also there was no uniform drubbing of one party by the other. It was not a blowout. It was a competitive election. Yes, Joe Biden won by a healthy margin, 7 million votes. 70-plus electoral college votes. But remember Republicans gained seats in the House. They won some key Senate races, right? Now, rather than looking at that outcome and thinking, wow, we could be a competitive party even in high turnout elections, which would have been a totally rational conclusion.

Republicans said, no, oh, God, never again. We want fewer people to vote. We need to do everything we can to manipulate the very mechanisms of American democracy to give ourselves a competitive advantage, or it's over for us. Now, today the Senate had the opportunity to stop that assault on democracy, to rebalance the playing field with a vote on the For The People Act. And what that bill would do -- there's a lot of parts -- if it had not been killed by the Republican filibuster this evening, would create a permanent national floor for voting access kind of similar to the rules we saw across the country during the pandemic that led to that historic turnout, the highest level of democratic participation we have seen in our lifetimes. But of course, Republicans view that, you know, expanding voter access, in the aggregate, as a purely partisan exercise. And think of this. That is because in their heart of hearts, in their deepest souls, they do not trust their own message enough to appeal to a majority of Americans in a high turnout election. Ahead of the vote, Senator Mitch McConnell even called it a power grab.

SEN. MITCH MCCONNELL: Later today the Senate will vote on whether to advance Democrats' transparently partisan plan to tilt every election in America permanently in their favor. By now the rotten inner workings of this power grab have been thoroughly exposed to the like. It's a recipe for undermining confidence in our elections, remaking our entire system of government to suit the preferences of one far end of the political spectrum.

HAYES: Ok, obviously laughable bit of projection. What McConnell claims Democrats are doing is exactly precisely what has happened in state after state controlled by Republicans. Earlier this year in Georgia, sweeping voter restriction law passed with just Republican votes, transparently partisan, you might say, in the statehouse and in the Senate signed by Republican governor. In Iowa Republican legislatures approved new restrictions including knocking an hour off of when you can vote on election day, for no reason. And again on a party-line vote signed into law by a Republican governor. Transparently partisan.  In Montana, two bills changing election law passed the Republican-controlled legislature almost entirely on a party-line vote. Governor of course, also a Republican. In Texas, another restrictive bill passed in the Senate. Party line vote, transparently partisan. Democrats, before the House Democrats, walked out and killed it. But they're not done yet.

Okay. So, that's the scorecard on transparently partisan attempts to tilt the field, right? In terms of undermining trust in the system, I mean, come on, spare me. What are we doing here? I mean, Mitch McConnell's Republican Party is the one whose leader undermined the election even before and during and after and then culminated in whipping up a violent insurrection. And then Mitch McConnell himself refused to vote to sanction or remove him. And now state after state is falling down the Republican Party's conspiratorial rabbit hole. In Arizona, the ballot audit continues, as a Pennsylvania state senator who chairs a key election committee now says he wants a similar audit in his state. In Fulton County, Georgia, a judge is deliberating over whether to allow an audit of their 147,000 ballots. Democratic state lawmakers in those states and all across the country have been watching this assault on voting rights. 480 of them signed on this letter to congressional leadership pleading with them to pass federal voting rights legislation. Some of those Texas Democrats who walked out of their own statehouse to kill that restrictive voting bill have been on Capitol Hill pushing for federal action. Arizona's Democratic Secretary of State, Katie Hobbs, herself the target of threats and harassment and vitriol, called out her own state Senator Democrat Kyrsten Sinema for refusing to get rid of the filibuster that stands in the way of passing this voter protection law. Because full Democratic unity is the only way to get this done. Senator Raphael Warnock, pastor, the same church as Martin Luther King Jr. who spent a lifetime working on these issues, along with preaching to the pulpit before being elected, thanks to last year's incredible turnout in Georgia, eloquently laid out the stakes today.

SEN. RAPHAEL WARNOCK: Right now across the nation, constitutional rights are being assaulted. And I fear that if we don't act as a body in this moment, we will have crossed a dangerous rubicon in our nation that will make it extremely difficult for the next generation to secure voting rights for every eligible American. This is not our house. This is the house of the people. We are stewards of that trust. We have to ensure that the voices of the people can be heard in their own house.

HAYES: In the end, we ended up where we knew we would end up. 50/50, party-line vote in the United States Senate tonight. Stark division, one party that is radicalized against democracy and in pursuit of its own power, a party whose leader can count on every member of the caucus no matter where they are not to defect on the most elemental questions. A party that has come to rely not only on winning over voters but on manipulating the machinery of access as Texas Congressman Ronny Jackson explicitly copped to yesterday.

REP RONNY JACKSON: We have everything working in our favor right now. We have redistricting coming up, and the Republicans control most of that process in most of the states around the country. That alone should get us the majority back.