"Another 'religious freedom' bill on the brink" blared an MSNBC.com front-page teaser headline over a backdrop of a rainbow-colored LGBT flag."

What's so offensive about the Volunteer State's legislation, House Bill 1840? Margolin desribed it as:

a measure that would allow counselors and therapists to deny service to a patient if doing so were to conflict with the counselor’s “sincerely held religious beliefs.” 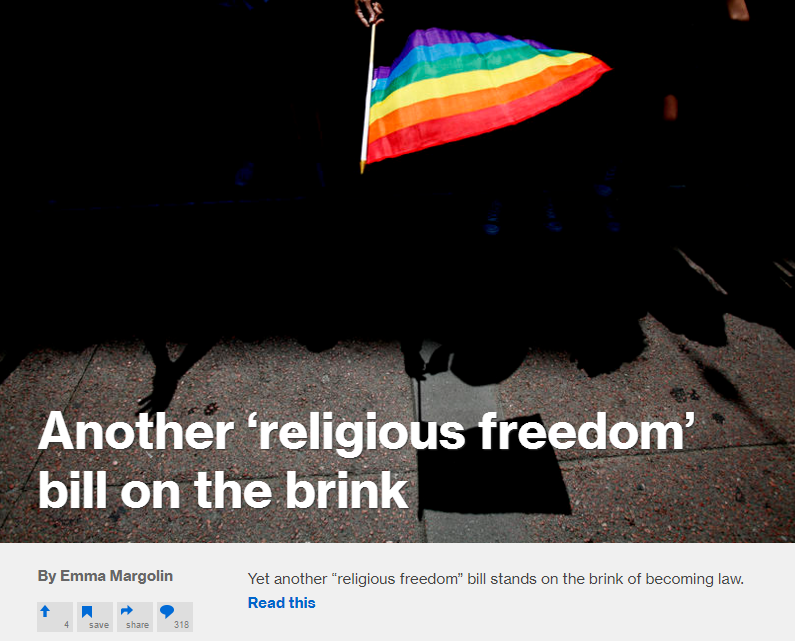 So it's a problem to have a law stipulating that, yes, counselors and therapists may decline to take on a patient who might present them with a situation wherein they must, in the course of treatment, violate their religious beliefs?

Margolin went on to quote a detractor of the bill, but gave no such courtesy to supporters (emphases mine):

Supporters of Tennessee’s H.B. 1840 say the bill is necessary to protect to the religious beliefs and moral convictions of counselors practicing in the state. They also argue that the bill will allow for patients to receive better treatment from someone more suited to them. But critics say the bill will cut off access to vital healthcare services, disproportionately impacting LGBT youth, who are more vulnerable to bullying and mental illness. More than 50 clergy members have condemned the bill, as have the Tennessee Association for Marriage and Family Therapists, the American Foundation for Suicide Prevention, the Tennessee Counseling Association, and the American Counseling Association, whose code of ethics states that counselors may not discriminate against clients on the basis of sexual orientation or gender identity.

“This bill is an unprecedented attack on the counseling profession and endangers the health and well-being of Tennesseans,” said Art Terrazas, director of the American Counseling Association, during a press conference Tuesday. “H.B. 1840 puts the government into people’s private lives, right between a person and their healthcare provider — exactly where the government shouldn’t be.”

Margolin then closed her article by turning the the liberal network's newfound political ally, corporate America:

As in North Carolina and Mississippi – where executives from GE, the Dow Chemical Company, PepsiCo, Hewlett Packard Enterprises, Hyatt Hotels Corporation, Choice Hotels International, Inc., Levi Strauss & Co., and Whole Foods Market are now calling for the repeal of HB 1523 – Tennessee’s "religious freedom" measure stands to provoke a major corporate backlash. The Volunteer State is home to several Fortune 500 companies – including FedEx, which prohibits discrimination based on sexual orientation and gender identity for all operations. In a statement to MSNBC, FedEx communications adviser Jack Pfeiffer said the company "does not tolerate discrimination."

Pfeiffer did not comment specifically on HB 1840, but he added: "We are committed to diversity and inclusion in the workplace and our corporate values are grounded in that commitment."

Now, to her credit, Margolin did link to a website which itself links to the current version of the bill. You can read the full legislation here, it's only two (2) pages.Of course, when you do, you may notice something that Margolin curiously left out (emphasis mine):

Yes, Ms. Margolin failed to note that the law requires counselors and therapists to give patients a referral so they can shop around for a practitioner who has no religious or moral objection to the therapy sought.

So, for example, suppose a teenager wrestling with gender-identity issues wishes to express him or herself as the opposite gender and seeks psychological counseling along the way in service of those aims. Suppose the counselor in question is an evangelical Christian, an Orthodox Jew, a devout traditional Catholic, or a conservative Muslim, and believes that participating in such pro-transgender counseling would be a sinful action. This counselor, under state law, will be shielded from...:

(1) A civil cause of action; (2) Criminal prosecution; or (3) Any other action by this state or a political subdivision of this state to penalize or withhold benefits or privileges, including tax exemptions or governmental contracts, grants, or licenses.

...so long as the counselor takes due diligence to refer the patient to a counselor who would undertake the therapy in question.

Freedom of religion and freedom of choice in the marketplace. Why are these concepts such problems for our friends on the Left? Let me know what you think in the comments section.