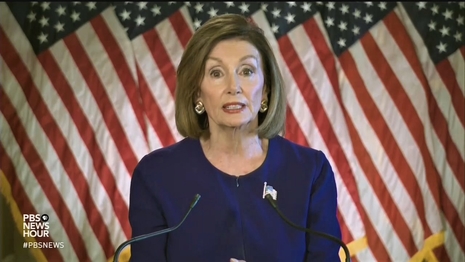 It goes without saying that the liberal media just loved outgoing Democrat Speaker of the House Nancy Pelosi. If Pelosi did X, then X was just fine by the media. Take, for example, the case of Georgia Republican Marjorie Taylor Greene, a favorite target of liberal Democrats for her conspiracy theories.

Here’s a typical headline about Pelosi’s treatment of Rep. Greene, this one from the New York Times.

The House votes to strip Marjorie Taylor Greene of her committee assignments.

The Times story begins by reporting that on the long list of Greene’s sins was included trafficking in “anti-Semitic conspiracy theories.”

Then there was this from NPR:

The taxpayer funded leftist media outlet gloated that Massachusetts Democrat Jim McGovern had called out Greene for several things on his list, notably including that he had never heard her “apologize or retract the anti-Semitic” remarks.

And then there was the Associated Press, admiringly headlining this of the Pelosi Democrats’ removal of Greene from her committee assignments:

Characteristically, it was House Republican Leader Kevin McCarthy who at the time warned of the political dangers in stripping Greene of her committee assignments. Said McCarthy:

“If that’s the new standard,” he said of Democrats’ move against Greene, “we have a long list.”

Neither House Democrats or the media were in a listening mode for McCarthy’s wisdom. They also campaigned to remove Rep. Lauren Boebert over her "Islamophobic" comments about Rep. Ilhan Omar. But now?

Now that self-same Kevin McCarthy is close to being elected Speaker of the new GOP-dominated House. And here’s a sample headline from the media -- NBC in this case -- on a new McCarthy vow:

“He will adhere to the wishes of the lowest common denominator,” Rep. Adam Schiff, D-Calif., said when asked about McCarthy’s pledge to remove him from the House Intelligence Committee.

Three House Democrats swiftly pushed back at Minority Leader Kevin McCarthy's threat to strip them of their committee assignments if he is elected speaker.

After Republicans narrowly won control of the House in the midterm elections, McCarthy this weekend doubled down on his pledge to remove several prominent House Democrats from their committee assignments if he becomes speaker. McCarthy said he would not allow Rep. Ilhan Omar of Minnesota to serve on the House Foreign Affairs Committee, and Reps. Adam Schiff and Eric Swalwell, both of California, on the House Intelligence Committee.

In a tweet posted Saturday alongside a video clip, McCarthy said that he would keep his promise to remove Omar "based on her repeated antisemitic and anti-American remarks." He made similar comments during an appearance on Fox News on Sunday.

And right there were seen the media-loving Pelosi chickens coming home to roost.

The liberal media loved Pelosi for forcing the Republican Rep. Greene off her committee assignments for, among other things, anti-Semitism. McCarthy warned of the precedent this would set, but he went unheeded.

Now McCarthy has turned the tables. Democrat Rep. Omar has been seriously accused -- as was Greene -- of anti-Semitism. Infamously Omar had written of AIPAC, the American Israel Public Affairs Committee, “It’s all about the Benjamins baby.” An uproar ensued. On another occasion Omar had cited what she called “unthinkable atrocities committed by the US, Hamas, Israel, Afghanistan and the Taliban.”

All of this individually not to mention collectively was enough for McCarthy to promise to apply the Democrats’ standard for removing a Member from their Committee assignments.

For good measure McCarthy would include California Democrats Schiff and Swalwell, both who would be removed from the House Intelligence Committee. Schiff would be targeted for repeatedly lying about the Trump-Russia collusion hoax, Swalwell for a decidedly ill-advised affair with an alleged Chinese spy. McCarthy clearly thinks both Schiff and Swalwell showed appallingly bad judgement and cannot be allowed to sit on the Intelligence Committee. So, in the fashion of the Pelosi precedent with Marjorie Taylor Greene - off they would go.

And like clockwork, with, as the old saying goes, all the predictability of the sun rising in the east, the media clocks in with breathless headlines on McCarthy doing exactly what Pelosi did. CBS News attempted to explain Pelosi acted "in response to violent and extremist statements they promoted online." CNN set up Swalwell to complain this was the "Trumpization" of politics, when it's merely following Pelosi's example.

On CNN's 'Inside Politics,' John King suggests Dems had a POINT in stripping "egregious" Republicans of committee assignments, but whoa, Ilhan Omar, they "think she's too liberal and they don't like her, they think she's anti-Israel." They "think" she's anti-Israel?? pic.twitter.com/vt9AKkn0zI

Yahoo put in the headline that McCarthy was somehow a puppet of Marjorie Taylor Greene.

A modified version of that famous quote from former President Barack Obama’s pastor, the Rev. Jeremiah Wright, substituting the name “Pelosi” for Wright’s use of “America” comes to mind. That would read:

And right on cue, the liberal media is not happy. Imagine that.