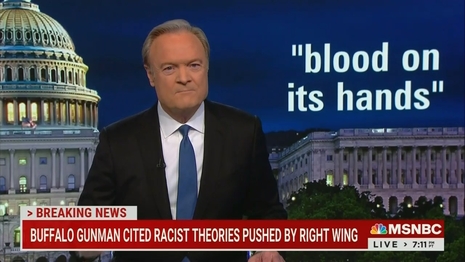 One doesn’t know whether to see this as hilariously ironic or simply evidence of a massive lack of self-awareness.

Here is the recent headline in The New York Times after the shooting in Buffalo, the story written by Nicholas Confessore and Karen Yourish.

A Fringe Conspiracy Theory, Fostered Online, Is Refashioned by the G.O.P.
Replacement theory, espoused by the suspect in the Buffalo massacre, has been embraced by some right-wing politicians and commentators.

Here is no less than The New York Times itself using the Replacement Theory to scare Americans of the day by playing the race card in this 1900 editorial, with bold print for emphasis supplied:

The Republican Party committed a great public crime when it gave the right of suffrage to the blacks…So long as the Fifteenth Amendment stands, the menace of the rule of blacks will impend, and the safeguards against it must be maintained. The South cannot hope to command the support of three-fourths of all the States for an amendment to the Constitution revoking the privilege so improvidently given to the Negroes thirty years ago. That would beyond all question be the just remedy, a proper reparation for a great wrong, and it ought to be evident to all the people that such an amendment would be an act of national wisdom.

Got that? The New York Times believed that giving “the right of suffrage to the blacks” would mean “the menace of the rule of blacks will impend.”

Can you say Great Replacement Theory?

In fact, The Daily Caller took the time to specifically headline this:

The list of leftwing media who loved “Replacement Theory” include:

Yet the hard, historical fact is that it is the American Left and the Democratic Party that has historically been terrified of a “Great Replacement” – by African-Americans. Yet, mysteriously, the “mainstream media” is utterly silent on this, preferring instead to attack Tucker Carlson and Fox News.

But what, pray tell, is the liberal media not telling you about the official Democratic Party on-the-record history on blacks? This.

The party began writing their political platforms in 1840, with the first six supporting slavery. Next, the Democrats’ idea was to oppose the 13th, 14th and 15th amendments to the Constitution when the Civil War ended. The amendments abolished slavery, gave the freed slaves due process and then the right to vote. Does the liberal media remind of this? Of course not.

The liberal media won’t tell you either that post-Civil War, the Democrats went about setting up Jim Crow and the entire system of segregation to suppress what the Times called “the menace of the rule of blacks.”  Now the Left and its media allies are on to the blatant racism of “identity politics” - the son of segregation.

And yet, mysteriously, in the wake of the Buffalo shooting by an 18-year old kid who personifies the racism preached for some 200-plus years by the Left and the Democratic Party? The latter, as noted, which has successively supported every racist idea available in the day from slavery to segregation to today’s identity politics?  In the wake of all that hard core racism various media outlets are blaming….Tucker Carlson and Fox News?

As my NewsBusters colleague Tim Graham has written here, one liberal outlet after another has tried to blame Tucker or Fox or Trump or  somebody -- anybody -- on the right when they themselves repeatedly ignore the straight history of just where an 18 year old kid could possibly get his racism from.

Whether its CNN, MSNBC, ABC’s The View, The New York Times, The Washington Post, The Los Angeles Times or more, the left-leaning media has done everything it can to ignore the serious 200-plus year history of the American Left and its obsession with spreading racism. Which, in essence, is itself racist.

Where is, say, Joy Behar or Whoopi Goldberg or others on The View in calling President Biden to step forward, acknowledge his party’s long dependence on racist politics and apologize for his party’s staunch support for slavery, segregation and now the blunt racism of identity politics?

Where are my former CNN colleagues in acknowledging this disgraceful racist history and demanding an apology from Biden, the leader-of-the moment  of what has always been The Party of Racism? Where is the demand from all these media commentators that Joe Biden apologize for his party using the Ku Klux Klan as, per University of North Carolina historian Allen Trelease, “the terrorist arm of the Democratic Party”?

In fact, Joe Biden himself is the very embodiment of his party’s racism. Whether it comes out casually, off-the cuff - as it did when he told radio host Charlamagne tha God, an African-American,  that “if you’re for Trump you’re not black.” Or whether Biden says in a planned speech - say again a planned speech with a written text -  to a black organization that voting for Mitt Romney would “put y’all back in chains”? That is racial supremacy - pure racism - at work. But Biden’s open racism is not simply instinctive. The Biden racism comes from the Culture of Racism that is the very essence of the American Left and his party. And which, but of course, the liberal media studiously ignores.

Laughably, there was this from Howard Dean as reported here. The story begins:

Howard Dean said on MSNBC Thursday that Americans should “boycott” Fox News and primetime host Tucker Carlson. He also said he believes the entire Murdoch family should be deported.

Dean went on to say this of Tucker:

You know, the guy is nuts. I mean really, you are going to take this seriously in any way? But he is dangerous because he has a lot of people that believe in this nonsense. I actually think he’s crazy. But he’s malevolently crazy and he’s a danger to the United States of America, and since we can’t take him off the air, we ought to boycott Fox. I’ve had nothing to do with Fox for many, many years. I won’t buy a product that is advertised on Fox. Unfortunately, since I never watch Fox, I don’t know what the advertising is.

Hello? Howard Dean was once not just the Democratic Governor of Vermont but the Chair of the Democratic National Committee. And in neither capacity did he issue an apology from his party for its support for slavery and segregation. Nope. Old Howard was stone cold silent on his party’s long support for outright racism.  Hmmm.

So what do we have here in the wake of the Buffalo shooting?

What we have is a liberal media that is studiously stone cold silent on the Left’s and the Democratic Party’s 200-year plus history of the most vividly blatant racism imaginable. The very racism that the Buffalo shooter absorbed and used to murder ten human beings solely because of their skin color.

And so the liberal media projects the Left’s  own history on race to….Tucker Carlson and Fox News.

Laughable? Yes. Disgraceful? Certainly. Will they stop projecting their own history on others?

Will they even stand up and demand Joe Biden and his party apologize for that history?