The New York Times, Hunter Biden and the Suicide of Media Credibility 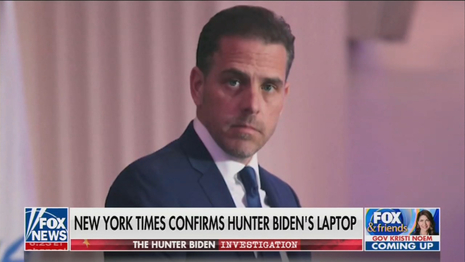 Way back there in the stone age of October 14, 2020, the Post ran this headline on its front page next to a photo of a smiling Hunter Biden alongside his also smiling Dad, Joe.

The headline, all in caps:

Just above the screaming headline was this: “Revealed: Ukranian exec thanked Hunter Biden for ‘opportunity to meet’ veep dad”

Hunter Biden introduced his father, then-Vice President Joe Biden, to a top executive at a Ukrainian energy firm less than a year before the elder Biden pressured government officials in Ukraine into firing a prosecutor who was investigating the company, according to emails obtained by the Post.

The never-before-revealed meeting is mentioned in a message of appreciation that Vadym Pozharskyi, an adviser to the board of Burisma, allegedly sent Hunter Biden on April 17, 2015, about a year after Hunter joined the Burisma board at a reported salary of up to $50,000 a month.

“Dear Hunter, thank you for inviting me to DC and giving an opportunity to meet your father and spent [sic] some time together. It’s realty [sic] an honor and pleasure,” the email reads.

An earlier email from May 2014 also shows Pozharskyi, reportedly Burisma’s No. 3 exec, asking Hunter for ‘advice on how you could use your influence’ on the company’s behalf.

The blockbuster correspondence — which flies in the face of Joe Biden’s claim that he’s “never spoken to my son about his overseas business dealings” — is contained in a massive trove of data recovered from a laptop computer.

This Post scoop was, suffice to say, a major news story in the middle of a hot presidential campaign between Joe Biden and President Donald Trump.

But eight days later, on October 22, 2020, The New York Times, in a story bylined by Adam Goldman, headlined this:

What We Know and Don’t About Hunter Biden and a Laptop
President Trump’s allies have promoted claims of corruption aimed at the former vice president’s son in an effort to damage the Biden campaign.

This jewel of a Times story said this:

Then there was the block from Big Tech. Reported Fox News the very day after the Post published its blockbuster:

Twitter's double standard emerges after NY Post Hunter Biden story blocked, other media get pass, critics say
'Their goal is to make it as unfair and undemocratic as possible,' Dan Gainor says

The Fox story began: “Twitter faced unrelenting backlash after blocking the spread of a New York Post bombshell that was highly critical of Hunter Biden on Wednesday, as critics pointed out the platform gave no such treatment to stories from CNN, The New York Times and other media with highly questionable sourcing.”

And now? Over a year after The Times -- and others in the mainstream media -- tried to discredit the Post story? The Times runs this story -- buried way inside on page A-20. The headline:

Hunter Biden Paid Tax Bill, but Broad Federal Investigation Continues
The Justice Department inquiry into the business dealings of the president’s son has remained active, with a grand jury seeking information about payments from around the world.

And, lo and behold, buried in this Times story is this admission:

People familiar with the investigation said prosecutors had examined emails between Mr. Biden, Mr. Archer and others about Burisma and other foreign business activity. Those emails were obtained by The New York Times from a cache of files that appears to have come from a laptop abandoned by Mr. Biden in a Delaware repair shop. The email and others in the cache were authenticated by people familiar with them and with the investigation.

In response to The Times red-faced admission the Post runs this editorial, doubtless laughing all the way:

Forgive the profanity, but you have got to be s–tting us.

First, The New York Times decides more than a year later that Hunter Biden’s business woes are worthy of a story. Then, deep in the piece, in passing, it notes that Hunter’s laptop is legitimate.

“People familiar with the investigation said prosecutors had examined emails between Mr. Biden, Mr. Archer and others about Burisma and other foreign business activity,” The Times writes. “Those emails were obtained by The New York Times from a cache of files that appears to have come from a laptop abandoned by Mr. Biden in a Delaware repair shop. The email and others in the cache were authenticated by people familiar with them and with the investigation.”

Authenticated!!! You don’t say. You mean, when a newspaper actually does reporting on a topic and doesn’t just try to whitewash coverage for Joe Biden, it discovers it’s actually true?

The shorthand here is that The New York Times went out of its way not to report or investigate the facts in the Post’s story. No, The Times response and that of all manner of “mainstream” media figures was to pooh-pooh the Post scoop, to pretend that it was all discredited garbage and Russian information.

There could have been only one reason: to protect then-candidate Joe Biden. As noted, Big Tech went even further, simply blocking the story altogether.

Trump Attorney General William Barr has pointedly acknowledged the effect of all this, saying on Fox News (as reported by The Epoch Times):

The widespread action against stories on emails and other material from a laptop believed to be owned by President Joe Biden’s son impacted the 2020 election, former Attorney General William Barr said on March 17.

After the New York Post reported on the materials, Twitter blocked the circulation of the story and other news outlets cast doubt on the veracity or refused to report on the developments, outlining claims including that the release was part of a Russian disinformation effort or did not matter.

“That definitely made an impact on the election, the suppressing that news,” Barr, who served during the Trump and George H. W. Bush administrations, said on Fox News.

“And it’s not a question of whether it was criminal or not, right. Just the facts alone were shameful. And most Americans would immediately see what was going on and how repulsive it was, and it would have had an effect. The issue of criminality is a different issue,” Barr added.

Over there at Breitbart was this headline after The Times fessed up:

The Breitbart story named names, too, featuring name journalists from MSNBC, The Daily Beast, NBC, The Washington Post, Mother Jones and CNN among others. To a person the Post story was dismissed as “most likely Russian propaganda” (CNN), “Russian disinformation” (Mother Jones), “false” and “possibly part of a Russian disinformation campaign” (The Washington Post). And on and on and on this decidedly real dis-information campaign from the liberal media went.

To sum it all up? What The New York Times and all the rest have done is kill their own credibility as serious journalists or journalistic outlets. They sacrificed their credibility by deliberately suppressing or dismissing a decidedly accurate major news story that, yes indeed, could have affected the 2020 presidential election to the negative - for Joe Biden. Their favorite candidate.

As The Federalist’s staff writer Jordan Boyd has correctly observed:

Despite the New York Times quietly now admitting the legitimacy of the laptop, don’t expect an apology from them or any other corporate media outlets, pundits, Democrats, or Big Tech. They have demonstrated over and over that their missteps are no good-faith journalistic “errors” warranting a “correction” or follow-up story a year and a half later. They will do whatever it takes to empower themselves and their political allies.

Shameful, stupid - and suicidal to their own credibility.