Amid Multiple Scandals, Is CNN Imploding? 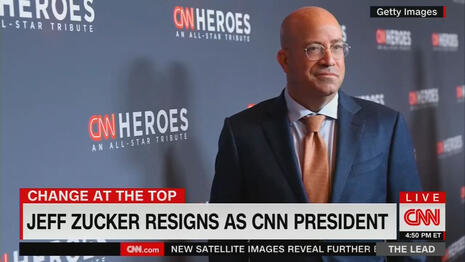 Put me down as astonished.

As the world now knows, CNN president Jeff Zucker resigned this week, the news a bombshell in media circles. The cause as stated is his romantic relationship with CNN marketing chief Allison Gollust.

His letter began this way:

As part of the investigation into Chris Cuomo’s tenure at CNN, I was asked about a consensual relationship with my closest colleague, someone I have worked with for more than 20 years.

I acknowledged the relationship evolved in recent years. I was required to disclose it when it began but I didn’t. I was wrong. As a result, I am resigning today.

A few days have passed since that statement was released, and stunningly it appears there is almost open warfare swamping the network. What to make of all this?

Let me start by saying that I know most of the names mentioned in the cascade of stories that have followed the Zucker announcement. And full disclosure, I liked - and still like - all of them. Yes, Jeff Zucker fired me, and I discussed the firing in the pages of The American Spectator way back there in 2017.

Was I angry in the moment? Of course. But life moves on and it is all too short to spend time looking backwards and carrying a grudge. So I have zero hard feelings towards Jeff Zucker. In fact, I feel badly for both Jeff and Allison Gollust, both of whom were certainly nice to me while I was there. In fact, I continue to like all of the CNNers I crossed paths with while working there.

With that out of the way, it is perfectly legit to wonder what in the world is now going on inside the network.

I would suggest this.

CNN, recall, was created out of the blue in 1980 by Atlanta billboard magnate Ted Turner. The idea of a news network airing 24/7 was, in the day, a novel concept. Why did Ted Turner create CNN? Here is his explanation as he wrote it in his autobiography/memoirs Call Me Ted, bold print for emphasis supplied:

Although I hadn't watched much television news, I did have some strong opinions about what I wanted CNN to be. While the networks and local news stations seemed to follow a 'if it bleeds, it leads,' rule centering their broadcasts on murders, car wrecks, disasters, and the like, I wanted us to do more serious journalism and to go deeper into the more important issues of the day. I also wanted to present the news in an unbiased fashion. At that time, some of the evening anchors, including Walter Cronkite, were injecting their own opinions into the telecasts and I just didn't like it. I decided that on CNN, news would be the star, not our on-air people.

And for the longest time, that’s exactly what CNN was: straight news, all day, all night.

Over time this gradually began to change.

In 1982, CNN birthed an opinion show called Crossfire, in which two conservatives were pitted against two liberals. The show ran for 23 years before being pulled. It had a brief second life from 2013 to 2014 when it was cancelled for good.

But with the arrival of Jeff Zucker, it seemed that CNN was slowly heading in a different direction altogether. Which is to say, there was more and more opinion, less and less hard news.

By the time of the arrival of his then-friend Donald Trump on the political scene the network began covering the famous Trump rallies and, oh yes, hired first myself and then fellow Trump supporter Kayleigh McEnany. Suffice to say, our hiring was a decided benefit to both Kayleigh and myself - and, as I was told at the time by Jeff himself, to CNN.

What strikes in retrospect is how the Trump-era at CNN evolved. Either I or Kayleigh would be on multi-person panels and very quickly it would become everybody else against me or her. Jeff loved it because, as he would know, it was good television, his first and primary concern always. And I always loved a good debate!

But as time moved on, with Trump elected and his election shocking not only CNN but the liberal media at large, the Trump-Zucker relationship began to sour. And as it did, I thought that the fact that Jeff was indeed, politically speaking, a man of the Left, this meant that the increasing dislike of Trump opened the door for an increasingly leftist direction – can you say “Trump-Russia collusion”? – that was more opinion than news for the network. Which is to say, in contrast to Ted Turner’s original vision of a network that was to be a “just the facts” network it was becoming an anti-Trump, seriously left-leaning network.

Into all of that came Chris Cuomo, decidedly no Trump fan. But he was a decided Jeff Zucker fan and friend. Then came the pandemic. Here’s The New York Post on what happened next:

Jeff Zucker is out at CNN — for failing to disclose a (consensual) relationship with a subordinate. Which means his crimes against journalism and the network’s viewers will get swept under the rug.

Above all, his equally consensual but far less professional relations with now-disgraced but then-Gov. Andrew Cuomo.

The object of their collusion: To make Cuomo into a state and national savior figure...before the governor got taken down by his own alleged sexual misdeeds.

Then, incredibly, Andrew Cuomo’s rising star abruptly flamed out amid a slew of sexual harassment allegations combined with his decision to allow senior citizens in nursing homes to be exposed to those with COVID. The combination was politically fatal, but loyal brother Chris was operating quietly behind the scenes to save his brother. And with that revealed, and added to an allegation that Chris had his own harassment problem with his earlier stint at ABC, Chris was abruptly fired.

Again, note the first sentence of the Zucker resignation announcement: “As part of the investigation into Chris Cuomo’s tenure at CNN, I was asked about a consensual relationship with my closest colleague, someone I have worked with for more than 20 years.”

This was nothing if not a broad hint that Chris Cuomo had turned on his onetime friend and boss. Suddenly the media is now filled with stories about Chris suing the network for $18 million in unpaid salary, followed by headlines like this one at Newsmax:

An outside observer might say, ‘Well, it looks like Chris Cuomo succeeded. He threatened Jeff. Jeff said we don’t negotiate with terrorists. And Chris blew the place up. How do we get past that perception that this is the bad guy winning?

And there’s more. I suspect the reports that CNN staffers think Jeff Zucker got a raw deal are accurate. They like him and had tremendous respect for him.

Add all of this together - tanking ratings and a massive internal fight - and the only conclusion is that the network is at this moment a mess. Imploding in plain sight.

There are people out there chortling over all this. I’m not one of them. Too many good and decent people are getting hurt in all of this.

But if there’s one thing that’s all too obvious it is that the new management of CNN is going to have to wade in and get a grip on all of this. End the infighting and clean up the mess.

And just maybe get back to what was Ted Turner’s original vision for CNN. Just the facts.