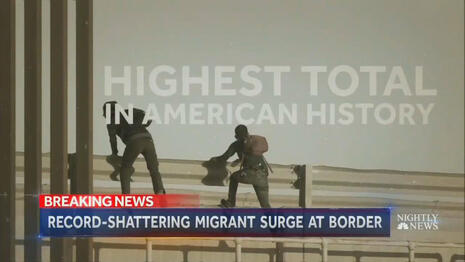 Recall the extensive and scornful media coverage then-President Donald Trump received when he beefed up security around the White House? Here’s a sample:

“If Trump erected more than 3 miles of fence around the White House, it would exceed the length of his new wall on the southern border," tweeted Anthony Scaramucci, who was Trump's communications director for a little more than a week in 2017. "His bigotry is only exceeded by his incompetence.”

Then there was this as quoted by NBC:

From The Daily Dot was this:

From Yahoo News: “Inside the heavily-fortified White House, now surrounded by more than a mile of extra fencing, is an increasingly isolated president.”

On and on - and on and on - went similar stories in the national media mocking Trump for building his “wall” around the White House.

And famously, of course, President Biden has made it crystal clear he will not build a wall on the southern border.

All of which is to say, this makes the deafening silence from the national media about President Joe Biden and his new wall all the more noticeable. In fact, as best as I can discover, no national media outlet has trumpeted this story from the quite local Cape Gazette in - you guessed it - Rehoboth, Delaware. The headline so studiously ignored by the national media:

Yes, you read that right. An enterprising Gazette reporter named Chris Flood did his homework and wrote this, with bold print supplied here for emphasis:

The first time he was in town as president was in June. During that visit, Secret Service and local police set up a checkpoint at the North Shores intersection leading to his house, nearby Gordons Pond was closed periodically, and the Federal Aviation Administration issued temporary flight restrictions.

By the time he was in town for a second time, a few months later, the Coast Guard had officially established security zones in the Lewes-Rehoboth Canal and Atlantic Ocean.

Now, when Biden visits for a third time, a security fence will either be finished or close to it. According to the website USAspending.gov, an online database of federal government spending, the Department of Homeland Security, with the Secret Service as the subagency, recently awarded a $455,000 contract to Rehoboth’s Turnstone Builders for ‘purchase and installation of security fencing at 32 Fairview, Rehoboth Delaware.’

And the response from the mainstream national media? Silence. There are no stories about Biden refusing to fund a wall on the southern border - but building a wall around his beach house. There are no stories that the money to build Biden’s beach house wall - almost a cool half a million dollars - is coming from the Department of Homeland Security, whose boss, Secretary Alejandro Mayorkas, is a staunch opponent of funding and building a wall on the southern border.

The silence on the Biden beach house wall recalls the silence from the media that greeted The New York Post’s 2020 meticulously researched investigative exposé of Hunter Biden’s laptop. A few days ago, in fact, The Post ran an editorial on just that. The headline:

One year later, The Post’s Hunter Biden reporting is vindicated — but still buried

The editorial said, in part, this:

One year ago, The Post revealed that Hunter Biden’s abandoned laptop carried proof he sold influence while his father served as vice president — and his dad, now president, knew it. Yet most other media treated the story itself as the scandal, reporting only on vague claims that sought to undermine it rather than rushing (as they would’ve under the last president) to advance it themselves.

None of them has learned any lesson except that it worked: Big Tech and Big Media got their way, at the expense of our democracy.

Also the media’s conspiracy of silence on things Biden  reminds that there has been virtually no media spotlight - with the exception of conservative media - of the influence pedaling Biden family.

The hard fact here is that yet again the double standards of the liberal media, in their drive to trash Donald Trump and protect Joe Biden, means that the interesting reveal of taxpayer funding for the building of a Biden beach house wall will never get the coverage that was given Trump’s security fence. Like The Post’s coverage of the Hunter Biden laptop, the beach house wall story will simply be buried.