CNN and Chris Cuomo Need to Admit: They Have a Ron DeSantis Problem 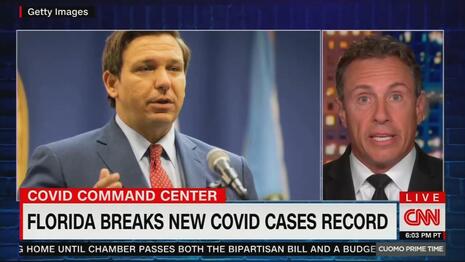 Let me begin with the obvious.

As a former CNN contributor, I know Chris Cuomo. And yes, I like him.

Yet, like him or not, undeniably he is in a mess that derives from big brother Governor Andrew Cuomo’s sex scandal. As Chris appears to recognize belatedly, he did CNN no favors by formally participating in strategy formation for his brother, as New York attorney general Letitia James says he did in her widely discussed investigative report of Andrew Cuomo’s problems.

Yet even as he is caught up in all of this, Chris is on the air bashing Florida Governor Ron DeSantis for the rise of Covid-19 numbers in Florida, claiming DeSantis is holding the rest of the country hostage with his handling of the situation.

Under the circumstances, Chris is the absolute last person in the media who should be opining on this. It is most assuredly not forgotten that while his brother was busy inserting Covid carriers into New York nursing homes, Chris had him on his show repeatedly to engage in brotherly banter.

The New York Post editorial board has reminded of the Governor’s actions on Covid. The headline — replete with the Post’s now frequent description of Andrew Cuomo as a “creep” —  was this: “Lest we forget: Creep Cuomo’s continuing his COVID coverup.”

The editorial says, in part, this:

“The sexual-misconduct allegations against Gov. Andrew Cuomo seem likely to drive him from office, sooner or later. But his coverup of deaths at nursing homes, after he ordered them to accept COVID-infectious patients, is just as strong an argument, if not a stronger one, for him to leave.

Yet most amazing, his coverup of COVID info continues to this day.

…Alas, even at this point, Cuomo is still hiding his record on COVID, which is why the state counts only confirmed, and not suspected, COVID deaths, letting it claim a toll of “only” 43,000 New Yorkers, and not 54,000, as the Centers for Disease Control and Prevention put it.”

With all of that out there and, one suspects, more coming on the nursing home scandal front, what Chris is doing with his DeSantis attacks can quickly be perceived as an attempt, yet again, to use his show to distract from his brother’s Covid record by attacking DeSantis.

Is it any wonder that another Post story from this past week had this headline: Confusion at CNN over how to handle Chris Cuomo’s involvement with brother.”

“Chris Cuomo’s CNN colleagues are confused at him being allowed to stay on air without mentioning his brother’s sex-harassment scandal — with some “dismayed” that he was not disciplined for his involvement in trying to cover it up, according to a report.

The 50-year-old anchor has remained hosting his hour-long “Cuomo Prime Time” show without any mention of the mushrooming scandal facing him and his brother, New York Gov. Andrew Cuomo.

The prime-time news silence on the biggest story of the day is jarring for viewers — and even more confusing for Chris Cuomo’s colleagues at the left-leaning network, sources admitted to The New York Times.

So far none of CNN’s sizable pool of female anchors or on-air contributors have discussed their colleague’s role in advising his brother, even though many have been vocal supporters of the #MeToo movement, analysis by Fox News showed.”

To say the least, this isn’t good for Chris and it isn’t good for CNN. But the idea that his show would focus on attacking DeSantis - while being strangely silent not only on his brother’s nursing home scandal or the rest of his mess - but being silent on President Biden’s policy that has resulted in thousands of Covid-infected illegals swarming across the US border? All that does is increase the perception that Chris is really about liberal or Democratic Party activism as opposed to journalism.

Here’s a headline from, of all places, NBC News:

Detainee transfers have led to COVID-19 outbreaks in facilities in at least 5 states. Despite limited testing, over 1,400 detainees have tested positive.

And deep in that NBC story is this on just where some of these infected migrants have been sent: Florida. Hmmm.

Make no mistake. This is a direct result of Biden policy. It has zero —  zero —  to do with Governor DeSantis. Yet it’s DeSantis that Chris is targeting. Which is to say, he leaves the impression of not only protecting his brother by attacking DeSantis, but protecting Biden who most decidedly is not his brother but the sitting Democratic President of the United States.

Let’s be honest. The whole Andrew Cuomo situation is a mess. And it has dragged Chris Cuomo into the middle of the mess, making life difficult for his CNN colleagues.