It Didn’t Start With Trump: Remember This Early Press Lie About a Republican? 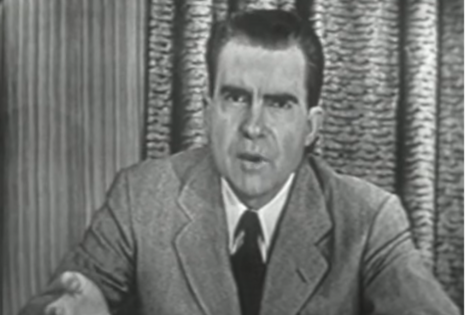 A  look-back in media history.

1952.  The question from a reporter to the candidate was this:

“Senator, what is this ‘fund’ we hear about? There is a rumor to the effect that you have a supplementary salary of $20,000 a year, contributed by a hundred California businessmen. What about it?”

As Nixon himself would write in Six Crises, his book of memoirs after leaving office as vice president in 1961, the story that he “had an extra salary was completely false.” The money donated was to “pay expenses for travel, printing and mailing of speeches, and extra clerical help - expenses which were strictly political in character and for which, therefore, I could not properly be reimbursed by the government.”

What followed was all political hell breaking loose, driven by the then-liberal Post and then others in the media, forcing Nixon to take to the relatively new medium of television to explain the facts. After running through the state of his family finances Nixon famously said there was one gift he had personally accepted, the cocker spaniel dog given to his two young girls.

The dog was named Checkers, he said, and he refused to give it back. Americans rallied to Nixon and he was kept on the ticket. The Eisenhower/Nixon ticket went on to win 442 electoral votes. The “Checkers speech” became a history-making moment for how politicians in trouble used television. (You can watch it here.)

Eventually it was discovered that Eisenhower’s opponent, Illinois Governor Adlai Stevenson, also had a fund  “which had been solicited from businessmen doing business with the state while he was governor.” But strangely, Nixon writes, “the national press gave the Stevenson fund relatively little play compared to the Nixon fund.”

This was an era when newspapers still dominated and television was only beginning. There was no cable blaring 24/7 and certainly no Internet. But what was happening to Nixon was an early example of liberal media bias. And importantly, there was an interesting pattern that was developing with Republican nominees: when attacked by the media - don’t hit back.

As the decades stretched ahead one Republican after another was nominated for president, some winning, some not. And in every case they became the target of liberal media bias. Read the history of nominees with names like Nixon, Goldwater, Ford, Reagan, Bush, Bush, McCain and Romney and without exception they gritted their teeth and took it.

(Although Goldwater did once launch on The New York Times and CBS for running with a story that as soon as he was nominated in 1964 he was headed to Germany to visit Hitler’s old stomping grounds and meet with “far-right wing” leaders in a bid to build a global coalition. There was not a word of truth to it and an angry Goldwater called them out.)

As President Donald Trump flew off to Florida, the usual eternal debate about a president’s accomplishments began. One decidedly serious contribution that has not been raised that I can see is his up-front willingness to repeatedly take on the liberal activist media. From calling them fake news and more, Trump has made a genuine impact with millions of Americans in terms of viewing the media and its credibility.

Look no further than this story at NewsBusters by Tim Graham. The headline: "POLL: Fewer Than Half of Americans Trust 'Traditional Media.'"

“ Felix Salmon at Axios reported Thursday that for the first time ever, fewer than half of all Americans have trust in traditional media, "according to data from Edelman's annual shared exclusively with Axios." It's only 46 percent.

* 56% of Americans agree with the statement that "Journalists and reporters are purposely trying to mislead people by saying things they know are false or gross exaggerations.”

* 58% think that "most news organizations are more concerned with supporting an ideology or political position than with informing the public.”

* When Edelman re-polled Americans after the election, the figures had deteriorated even further, with 57% of Democrats trusting the media and only 18% of Republicans.

They also found ‘Trust in social media has hit an all-time low of 27%.’”

This is no small piece of news. Had this attitude existed in 1952 or 1964, the credibility with which Americans of the day gave to papers like The New York Post or The New York Times or a network like CBS,  Nixon may never have needed to make his Checkers speech. And the attack on Goldwater by The Times and CBS may have backfired badly.

It is, of course, all too obvious that the liberal media is where it is in terms of credibility not simply because of Trump but because of themselves. Four years of lies about Trump-Russia collusion, impeachment and more has resulted in a serious self-inflicted blow to their own credibility.

Now the media gushing over the arrival of President Joe Biden (example: CBS said his inaugural address was like "reading from the Bible") ironically only reinforces the belief of the kinds of people in that Edelman poll.

Presidential reputations and accomplishments, as indicated, are debated for eternity. Ulysses S. Grant was ranked for decades as a terrible president with an administration filled with rampant corruption and more. Now, a full 144 years after he left the White House, Grant’s reputation is on the rise, re-assessed totally thanks to a hefty admiring biography by historian Ron Chernow and an equally glowing television series produced by no less than liberal actor Leonardo DiCaprio. For Harry Truman, who left office with a 35 percent approval rating, a mere twenty years later at his death he was being re-appraised as a great president.

Whether Donald Trump comes back in 2024 and runs and wins or goes about the business of setting up his own Twitter-style media company or something else, one thing is for sure.

After four years of Trumpian hit-backs, the credibility of the liberal media is in tatters.

Can it be re-built?

No. Not as long as they view themselves as woke left-wing activists instead of journalists. They are, one suspects, infinitely incapable of recognizing their problem - much less getting the courage to fix it.