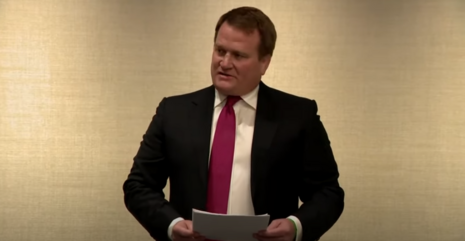 So shortly before the last presidential debate of the election season was to be held on Thursday night in Nashville, Tony Bobulinski stepped in front of cameras with something to say.

Who in the heck is Tony Bobulinski, you ask?

"I was told this past Sunday by somebody who was also involved in this matter that if I went public, this information -- it would bury all of us, man."

“Hunter Biden's ex-business partner Tony Bobulinski claimed on Thursday that he met with former Vice President Joe Biden regarding his son's business dealings and alleged that someone involved with the controversy had warned him about coming forward.

‘I was told this past Sunday by somebody who was also involved in this matter that if I went public, this information -- it would 'bury all of us, man,' Bobulinski alleged in a statement Thursday night.

Bobulinski went on to accuse the former vice president of lying about his involvement with his son's business dealings and claimed that the family sought to conceal his activities.

Specifically, Bobulinski alleges he met with the former vice president on May 2, 2017, and was introduced by his son Hunter and brother Jim.

‘At my approximately hour-long meeting with Joe that night we discussed the Bidens' history, the Bidens' family business plans with the Chinese, with which he was plainly familiar, at least at a high level,’ Bobulinski claimed.”

This would be called “news.”  Here is a further description of Mr. Bobulinski and what he had to say in The New York Post: "Hunter’s ex-partner Tony Bobulinski: Joe Biden’s a liar and here’s the proof."

‘I have heard Joe Biden say he has never discussed his dealings with Hunter. That is false. I have firsthand knowledge about this because I directly dealt with the Biden family, including Joe Biden,’ Bobulinski said following The Post’s bombshell reporting on Hunter Biden’s private emails.

Bobulinski, who will be a guest of President Trump at the debate, showed three phones spanning 2015 to 2018 as evidence and said he would be meeting with the Senate and the FBI to hand over electronics.”

And over in The Wall Street Journal was this from columnist Kimberley Strassel:

What we learned from the text messages of Hunter’s partner Tony Bobulinski.

“In a statement, Mr. Bobulinski said he went public because he wants to clear his name, which was contained in those published emails, and because accusations that the information is fake or ‘Russian disinformation’ are ‘offensive.’ He attests that all the correspondence he provided is genuine, including documents that suggest Hunter was cashing in on the Biden name and that Joe Biden was involved. Mr. Bobulinski says he was also alarmed by a September report from Sen. Ron Johnson that ‘connected some dots’ on the CEFC deal, causing him now to believe the Bidens sold out their U.S. partners.”

Now move over to CNN, the network where that first “N” stands for “News” - as in Cable News Network.

Go first to their official CNN website. Go to the “Search” function and type in “Tony Bobulinski.” And what pops up? A screen that reads this way, bold print in the original:

“Your search for Tony Bobulinski did not match any documents.

Say what? In the furious wind-up to the Trump-Biden presidential campaign a one-time Hunter Biden business partner turns up - with three cell phones and serious documentation stating that this influence-peddling scheme is about far more than Hunter Biden - it is about Joe Biden himself. Which means the Democratic presidential nominee, the former Vice President of the United States, is being accused specifically and in detail of corruption. As this is written Fox is headlining: "FBI asks to interview Hunter Biden ex-associate Bobulinski, Senate committee says."

And this isn’t news?

No. Not on CNN. Or MSNBC either. As Fox has noted here in this story by media reporter Joseph Wulfson:

“None of the major TV networks covered Thursday evening's statement by former Hunter Biden business partner Tony Bobulinski, who has come forward as a whistleblower and is implicating Joe Biden in his son's foreign business deals.

CNN, MSNBC, ABC, NBC, and CBS all chose to continue with their normally-scheduled programming, ignoring Bobulinski's first on-camera remarks about his past business ties with the Bidens.

Much of the mainstream media have either downplayed or ignored the growing Biden controversy. CNN anchor Jake Tapper claimed earlier on Thursday that the "right wing is going crazy" over Hunter Biden, declaring that the allegations are "too disturbing" to repeat on-air.

This deliberate non-coverage of a seriously major news story by the “mainstream” media boggles the mind.

Bobulinski, the ex-Hunter Biden partner, is a former four-year Navy veteran, leaving as a lieutenant. He is also the “grandson of a 37 year Army Intelligence officer, the son of a 20+ year career Naval Officer and the brother of a 28 year career Naval Flight Officer.” And yes, he is a Democrat who contributes to Democrat candidates.

None of that identifies Bobulinski as “wildly unhinged.”

Take a minute and go back to 2016. Recall the Access Hollywood episode? When an audio tape of then-private citizen Donald Trump having a disgusting conversation on a bus with Access Hollywood host Billy Bush was leaked?  Suffice to say, CNN covered the story. Here are samples of CNN stories:

How the shocking hot mic tape of Donald Trump was exposed.

Rush Limbaugh had a shrewd observation on his Friday show about the silence of the mainstream media on the Biden story. Mainstream journalists are social animals — and the group think of their peers is decidedly hating Donald Trump. Woe betide the reaction of one’s peers if they aired or printed a story favorable to Trump and bad for Biden.

Here’s a newsflash: These networks not reporting the Biden-Bobulinski are not “news networks.” They are left-wing propaganda outfits whose sole purpose at this moment is to protect Joe Biden by simply refusing to report anything that could hurt his campaign to defeat Donald Trump.

The irony? They are only damaging their own credibility. Big time.