From Facebook to Hollywood and Morning Joe: The American Left’s Intolerant Media Complex

Facebook knows hate speech when it sees it. And here it is as deliciously captured by Breitbart.

The target of the Facebook hate speech censorship was The Liberty County Vindicator, a Texas newspaper. The paper had uploaded the following to its Facebook page - and the censors jumped:

He has abdicated Government here, by declaring us out of his Protection and waging War against us.

He has plundered our seas, ravaged our Coasts, burnt our towns, and destroyed the lives of our people. He is at this time transporting large Armies of foreign Mercenaries to compleat the works of death, desolation and tyranny, already begun with circumstances of Cruelty & perfidy scarcely paralleled in the most barbarous ages, and totally unworthy the Head of a civilized nation.

He has constrained our fellow Citizens taken Captive on the high Seas to bear Arms against their Country, to become the executioners of their friends and Brethren, or to fall themselves by their Hands.

He has excited domestic insurrections amongst us, and has endeavoured to bring on the inhabitants of our frontiers, the merciless Indian Savages, whose known rule of warfare, is an undistinguished destruction of all ages, sexes and conditions.

This was outrageous hate speech to a Facebook lefty censor be it machine or human.

Of course, as a NewsBusters reader would quickly grasp? This censored hate speech is, yes indeed, an excerpt from….the Declaration of Independence. Authored by someone named....Thomas Jefferson. Eventually the post was allowed.

Move from Facebook and their distaste for Mr. Jefferson’s somewhat well-known tract and on to today’s Hollywood. One of the brave Hollywood souls to not only admit to conservatism but to liking President Trump is actor James Woods. Full disclosure: I was once in a movie with Mr. Woods — as an extra. The film was Contact, the movie version of a Carl Sagan novel about a scientist who realizes aliens out there are trying to contact earth.

By all appearances, Woods was a nice guy and complete professional, well liked and respected by his peers on the set. Which makes one ask the question: what could James Woods — who has twice received Oscar nominations, won three Emmys and a Golden Globe — have possibly done to get this Fourth of July missive from his own agent that is headlined this way by Mediaite: “Talent Agent Drops Conservative James Woods as Client By E-mail: ‘It’s The 4th of July and I’m Feeling Patriotic.’”

The e-mail to Woods from his agent, one Ken Kaplan, read as follows: “It’s the 4th of July and I’m feeling patriotic. I don’t want to represent you anymore. I mean I can go on a rant but you know what I’d say.”

Woods promptly released the e-mail to the public and noted the unsurprising reality: his agent is your standard political liberal. Woods responded thusly: 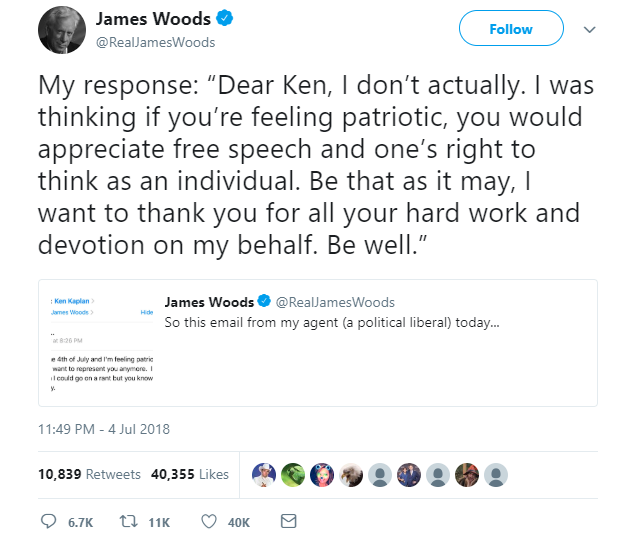 And there’s one more tale like this from the liberal side of the aisle, this one blossoming forth around Harvard Law Professor Emeritus Alan Dershowitz. Professor Dershowitz is not a conservative — he is a famously liberal guy. His problem? Alan Dershowitz happens to be a genuine civil libertarian. A former member of the board of the decidedly liberal ACLU, Dershowitz takes the rights of individuals seriously no matter their political leaning.

Hence, he has had the audacity to speak up for the legal rights of — gasp! — President Trump.

Combined with the fact that he has had the nerve to appear on Fox News and — bam! The good professor is now finding himself ostracized by his liberal friends and neighbors summering in Martha’s Vineyard. After he mentioned this publicly, here was the reaction from those supposed beacons of tolerance at MSNBC’s Morning Joe, as headlined again by our friends at Mediaite: “Morning Joe Laughs Out Loud at Alan Dershowitz’s Sorrows on Martha’s Vineyard: ‘Poor Thing.’”

Joe Scarborough and Mika Brzezinski sarcastically lamented all of this when they reacted on Thursday, and Katty Kay said she wasn’t so sure people will really care about the retired Harvard Law professor missing a few cocktail parties.

Later Kay added that if Dershowitz was going to defend Trump “he has to suffer the consequences when it comes back to bite him.”

So. What do we have here?

First, Facebook censors a posting of a segment from the Declaration of Independence as “hate speech.” Next, Oscar-nominated and three-time Emmy-winning actor James Woods loses his agent because of his conservative and pro-Trump views.

Then last but not least, when it comes clear that the liberals of Martha’s Vineyards are turning socially on their old friend and neighbor Professor Dershowitz, the Morning Joe crowd snarks it up and says, Dershowitz “has to suffer the consequences” for his views. Or in other words, he deserved it.

What we have here are three vivid examples of just how liberal intolerance works in the American Left’s media complex. Composed of one part ignorance (in the case of Facebook ignorance of serious American history), one part snooty elitism — the Hollywood agent and the Morning Joe snarkers — and one part a vivid totalitarian/intolerance streak (all three), combined what we see here is the core guiding philosophy of the American Left.

Some aspect of this radiates every day from the liberal media. While it has its amusing side in the show-watching or reading department, in fact what is on display in these three incidents has serious consequences for Americans. A combination of powerful media people, sheer ignorance, elitism and intolerance does not make for a good outcome.

And need it be said, Americans have seen this kind of combination thing before. If you don’t believe me, follow this link — to the Declaration of Independence.