Let’s just say the Liberal Media Narrative - replete with double-standards - ain’t what it used to be. Too many people, particularly conservatives and Republicans, are on to how the game works. Two of those people are Donald Trump and Texas Senator Ted Cruz, both GOP presidential candidates.

How does the Liberal Media Narrative game work? Like this.

Reported the New York Post of then-Senator Barack Obama during the fall campaign of 2008 in a remark that was instantly seen by Republicans as an attack on Alaska Governor Sarah Palin.

….Many in the Obama crowd leaped to their feet in delight – apparently taking the “pig” comment as a direct slam at Palin.”

The liberal media of  the day was outraged. From the New York Times to the Washington Post to MSNBC, Obama was pilloried for being a sexist and a misogynist. His poll numbers tanked.

Just kidding. The media didn’t care a whit, Senator Obama was not only elected president he was re-elected.

But not to worry. The media made up for this when it took Massachusetts Senator Elizabeth Warren to task for wanting to shutdown the government. Warren was furious that House Republicans had inserted what she called  a “Wall Street giveaway” designed to help “the rich and powerful.”

The outrage from liberal media was just ferocious. They cited one fellow Senator who had pummeled Warren as follows:

“The anarchy gang is quick to malign government, but when was the last time anyone called for regulators to go easier on companies that put lead in children’s toys? Or for food inspectors to stop checking whether the meat in our grocery stores is crawling with deadly bacteria? Or for the FDA to ignore whether morning sickness drugs will cause horrible deformities in little babies? We never hear that, not from political leaders in Washington and not from the American people.” 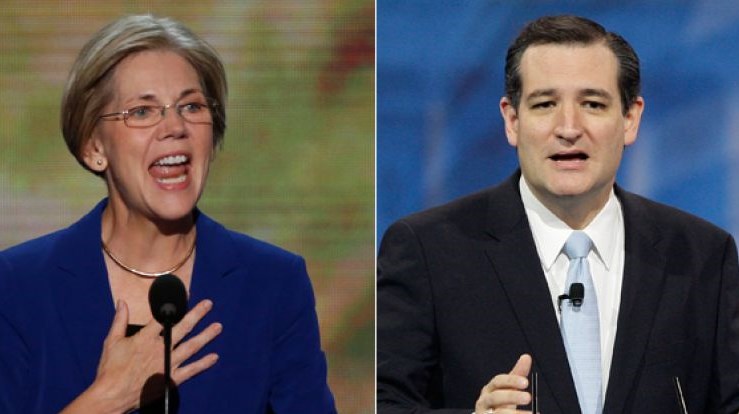 Oh…wait. Sorry. I made a mistake. That statement above was actually from Senator Warren herself when she was complaining about Senator Ted Cruz demanding that the entire government be funded except for ObamaCare. Cruz was a leader of “the anarchy gang”, and of course the media was bashing Ted Cruz six ways from Sunday.

But there actually was a moment when Senator Warren proposed shutting down the government because of what she really did call a “Wall Street giveaway” she saw as helping “the rich and powerful.”  And what was the reaction from liberals in the media when it was Warren - not Cruz - who proposed doing something that would result in a shutdown?

Over in The New Republic  the attitude about a government shutdown by Warren was a sudden 180 from the attitude when it was Cruz in the lead on this.   TNR chose this headline to emphasize the point:

Elizabeth Warren Is Risking a Government Shutdown to
Stop Wall Street. President Obama Should Join Her

Got that? Not only was Warren being cheered on to shutdown the government, Obama was being begged to help her. Wrote TNR’s Brian Beutler, bold print for emphasis supplied:

“Against a formidable bipartisan majority, any attempt to obstruct the bill’s passage can be construed as an effort to shutdown the government, just as when Ted Cruz and his small but determined group of supporters shut down the government over Obamacare in 2013.

The crucial difference is that last year, Cruz and his supporters in the House of Representatives, were demanding the inclusion of a contentious, extraneous policy rider in a spending bill as the price for keeping the government open. Warren, Pelosi, and other Democrats are trying to remove such a rider, not to insert it.”

Ah but of course. The Liberal Media Narrative at work. When Warren proposes something that would lead to a government shutdown, there’s a “crucial difference” than when Cruz does it.

Now comes the media dust-up over Trump’s remark’s about Carly Fiorina. And unlike the media’s treatment of then-Senator Obama’s attack on Sarah Palin with his “lipstick on a pig” comment, Trump gets no pass. As he did not with his comments on Fox’s Megyn Kelly after the Fox debate. The Liberal Media Narrative game is in play.

And it isn’t working.

What is the lesson here?  It’s an easy lesson, an old lesson and a lesson that has nothing whatsoever to do with Donald Trump on Carly Fiorina’s looks or Ted Cruz on a government shutdown beyond the fact that they are Republicans. The fact is that no Republican - no matter who he or she is - will get a pass on anything the media decides is “controversial.” The Liberal Media Narrative must be served  come hell or high water.

The question then becomes: how to deal with it.

As it happens, I asked Donald Trump  a version of this very question in the spring of 2014 - and he gave an answer to me in my interview with him published over a year ago in The American Spectator.  At the time the controversy du jour was about Los Angeles Clippers owner Donald Sterling, who was caught on tape making racially inflammatory remarks. Said Donald Trump on the subject of media dishonesty - aka the Liberal Media Narrative: 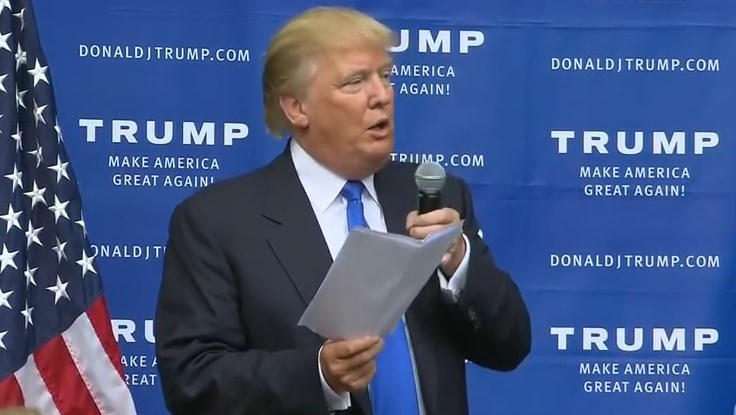 Mind you, all of that answer was made to me in a May, 2014 interview - well over a year before The Donald’s dust-ups with Megyn Kelly or over John McCain, Carly Fiorina etc. Which is to say, not only does Trump get the problem, but he put himself on record as saying he would not hesitate to go after what he described as the “large segment of the press that’s more dishonest than anybody I’ve seen in business or anywhere else.”

Now, a year later, Trump’s point and his answer as to how to deal with what he sees as a dishonest press is out there in his actions. He doesn’t run - he fights back. And his GOP audiences get his point. And they love him for taking on the press.

They understand why comments about the physical looks of a woman are bad if coming from Donald Trump, irrelevant and dismissed if coming from Barack Obama. Government shutdowns caused by Ted Cruz are a disgrace and a disaster, but if Elizabeth Warren wants to do one that’s OK, it needed to be done. If Clarence Thomas draws an accusation of sexual harassment he must be denied a seat on the Supreme Court. If Bill Clinton is accused by several women of sexual harassment and one steps forward with a detailed allegation of rape, well then its only about sex and besides if you drag a dollar bill through a trailer park you never know who will try and grab it - the latter the wisdom of Clinton’s James Carville in the day.

These were and are liberal media narratives, and conservatives understand how the game is played. The American public - notably Republicans and conservatives that are the base of the GOP -are no dopes when it comes to the media. Every sentient American walking is saturated with media coverage of events, and this in turn has produced a highly sophisticated audience of media consumers. On the Right side of the political divide the popularity of conservative media is stratospheric. This in turn has produced a GOP party base that is highly aware of the media’s double-standard game. And that base is clearly choosing to ignore the media controversies thus manufactured in this election cycle.

There was in fact nothing controversial in Donald Trump’s announcement speech when he spoke of a problem with illegal immigrants coming in to the US and committing crimes, raping etc. It was a well documented truth. But the media chose to blow it up and make it a controversy.  Result? Trump roared back - and soared as a result. He is still soaring higher with each new poll.  Fox’s Megyn Kelly went after Trump in the Fox debate - and he came back at her just as he insisted that he would do in our talk last year. Trump pushed back as the liberal media narrative tried to paint him as a sexist - and a new CNN poll comes out showing that Trump’s numbers have gone up 13 points - with women.

Deep in yet another new Quinnipiac Poll in Iowa was this question to prospective Iowa Republican Caucus goers: “Would you rather have a presidential candidate whose political experience was mostly outside of Washington or mostly in the government in Washington?”

And the answer? 87% - say again 87% want an outsider. With voters who described themselves as Evangelicals that number was even higher - 89%.

While the question was not about the media, the fact is that to many in America the mainstream media is tied tightly to those seen as allied with liberals or Establishment figures “in the government in Washington.”  It is very safe to say that among that 87% of Iowans who are furiously demanding an Outsider for president there are close to zero takers in any liberal media narrative.  Without knowing of Trump’s earlier declarations on the media, it is more than safe to say they share Trump’s disdain for what they both see as a dishonest media. Which in turn is a message about the media and its credibility with the GOP base.  The double-standard that was evident in the treatment of Trump and Obama or Cruz and Warren is seen as typical by grassroots Republicans. They have seen this rodeo before. And their response is defiant. They will not accept the liberal media narrative and will in fact go out of their way to reject it.

Donald Trump hates women? Then Republican women rally to Trump. Ted Cruz shut down the government and the GOP is to blame? Then GOP voters will rally in 2014 to give the GOP control of the Senate and just about everything except the White House, which wasn’t on the ballot.

Former Texas Governor Rick Perry, no accident, had deliberately embraced the liberal media narrative of Trump, specifically and loudly saying that Trump was a “cancer” on the GOP. This week Governor Perry dropped out of the presidential race.

When it comes to dealing with liberal media narratives, Perry failed to grasp what Trump and Senator Cruz both understand and what Dr. Ben Carson has come to understand.

In two words? Fight back. Anything less telegraphs to GOP voters that the candidate in question has met the Liberal Media Narrative of the moment and surrendered.

Never a good message for a potential president.