Amid the Wreckage of Mueller's Testimony, Maddow Dismisses Him as 'Distant Figurehead'

In the inevitable Hitler-in-the-bunker video parody created after Special Counsel Robert Mueller's surreal testimony before Congress yesterday, one of the characters consoles a weeping comrade by saying, "Just wait for Rachel Maddow. She'll know what to do." Exactly the advice you'd expect from a committed socialist.

Maddow did her darndest on Wednesday night to put the best possible shine on Mueller's debacle, wading through the train-crash wreckage of this Democrat "movie" in a desperate bid to revive the comatose effort to impeach President Trump. The problem was, there was no avoiding the widespread and bipartisan consensus that Mueller came across, to borrow from uber-leftist Michael Moore, as a "frail old man" and not Batman as we've long been led to believe.

For those unfamiliar with the peculiar liberal dialect known as Maddowspeak, allow this observer to translate. What follows is a transcript of Maddow's lame attempt at damage control, with my translation in italics:

MADDOW: A lot happened at this historic testimony today. Special Counsel Robert Mueller definitely seemed older than his 74 years. He seemed less on top of matters, I think, than anybody who has worked with him in the past appeared to have expected in terms of his appearance today. There had been the Justice Department threat ahead of today's testimony that Mueller shouldn't tread outside the bounds of his report and he shouldn't talk about uncharged third parties and he shouldn't talk about any decision-making processes, and he did reference those boundaries at times today but he surely went outside them at times as well. And he did so in ways that, it seems to me, point the sort of neon big bright arrows toward what we couldn't and didn't get from him today that it now seems fairly imperative to chase down.

Given the unrelentingly dire descriptions he gave about the President's conduct and the conduct of the President's campaign and its ongoing implications for the country, it seems like they gave us two big directions today that feel imperative in terms of what we try to figure out next and the paths that we next follow to try to get to the bottom of this still open scandal.

TRANSLATION: Just because Mueller left us high and dry, dashing the hopes of millions rendered barely able to function since imposition of the Trump junta, it is even more imperative that we find another way to take out Trump.

MADDOW: The first one is that Mueller's personal performance today I think puts the spotlight on the man who was sitting next to him and not speaking today, his deputy Aaron Zebley. He's described now as the deputy special counsel. We're now told that he ran the day to day operations of the investigation and the rest of Mueller's staff. There was so much that Mueller seemed sort of detached from today and he seemed to be at times taking it on trust that certain things were in his report or not, whether or not he personally recalled those things.

TRANSLATION: Which helps explain why Zebley "seemed" stricken much of the time he sat next to Mueller, who "seemed" not to have read the report that bears his name.

MADDOW: Because of that performance from Mueller today, I think that lights a fire under the need to speak to the people on his team who actually did the work.

TRANSLATION: We pinned our hopes on Mueller and he left us with nothing but the taste of ashes. Surely there is someone, anyone! who can help us keep this fishing expedition going indefinitely, or at least in time to swing the 2020 election.

MADDOW: I mean, if Congress really does want more substantive and detailed answers from the people who actually did that work, it would seem like they would have to pursue conversations now and testimony now from Zebley and from the other members of Mueller's team, including those who were sitting behind him in the hearing room today ...

TRANSLATION: If only they testified instead!

MADDOW: ... and those who we've seen involved in the various court cases and those who we know were on his staff. So we will talk more about this later on over the course of this hour but I think one of the outcomes of today's hearing is going to be a renewed interest by Congress in hearing from the people who were on Mueller's team and did the work, beyond the sort of distant figurehead figure of Mueller himself, which was revealed today by what I think was his sort of surprising affect.

TRANSLATION: Seeing how we must now toss Sideshow Bob under the bus it is imperative we find someone else to destroy Trump ... and then again, repeating as necessary ... until the outcome of that odious 2016 election is at last undone. 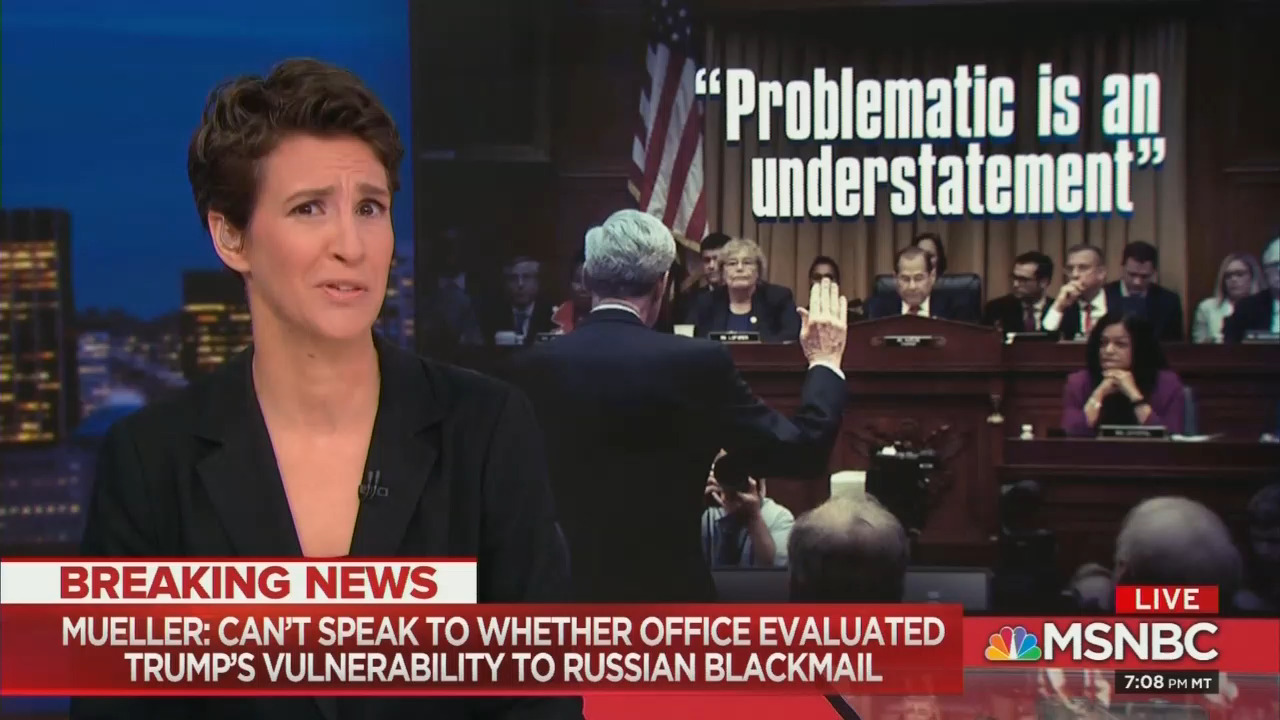 But if Mueller is a "distant figurehead" -- much the same observation made by Rush Limbaugh after Mueller's press conference in late May when Limbaugh described Mueller as akin to the "partner emeritus" whose name still graces the law firm but who no longer battles in court -- why did Mueller testify alone in the morning before the House Judiciary Committee, while he was accompanied by Zebley for the afternoon session before the House Intelligence Committee? Did he become "distant" over lunch and hence needed Zebley as a safety net?

Left unremarked by Maddow was the irony worth savoring that the people around Trump wisely kept him from testifying before Mueller -- while the team around Mueller unwisely let him to testify before Congress.

Further attempts by MSNBC's top evening entertainer to flog this long-dead horse will result in Maddow resembling those Japanese soldiers who refused to surrender for decades after the war ended.