New England Cable News touts itself as "the nation's largest regional news outlet" and it just may have set a record this week for most double-takes by viewers watching one of its broadcasts.

Among the offerings on NECN is a daily program on politics called Broadside, hosted by veteran journalist Sue O'Connell, who is also co-publisher of the South End News and gay-friendly Bay Windows.

O'Connell opted for a curious choice of guest on Presidents Day to discuss the death of Supreme Court Justice Antonin Scalia and the politics swirling around an unexpected vacancy on the high court.

Here is O'Connell's enthusiastic introduction of her guest, most notable for what was conspicuously left out --

O'CONNELL -- If you follow events in Boston, you need more than the Globe and the Herald (newspapers) and NECN to keep you informed. I recommend you follow the social media postings of my next guest -- she's indispensable! Dianne Wilkerson is a community activist and a former Massachusetts state senator. Welcome, Dianne. 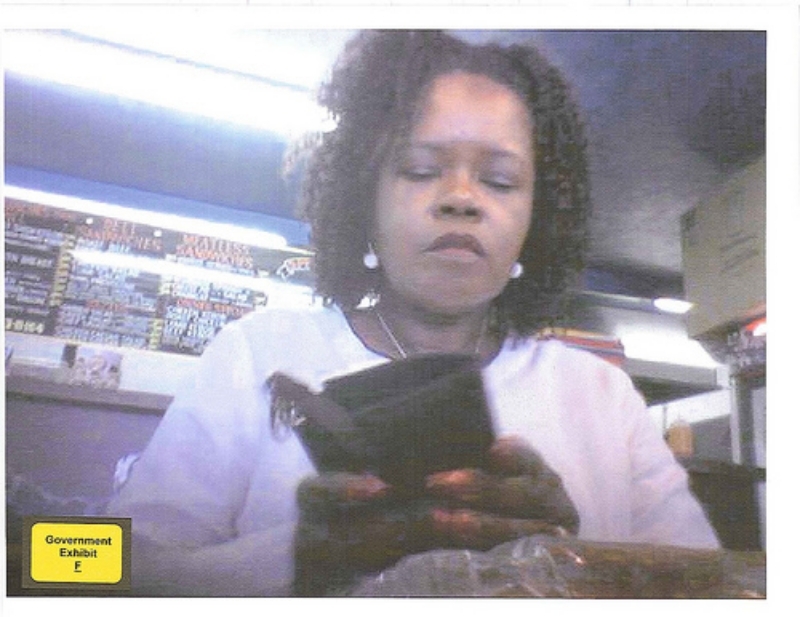 That she is -- a former Democrat state senator who was convicted and imprisoned on corruption charges after accepting $23,500 in bribes. Many a Massachusetts resident surely remembers the front-page photos from the FBI sting that nailed Nickerson showing her literally stuffing an envelope full of cash into her bra. (The photo at right is from FBI surveillance footage). But that was then, all of nearly eight years ago. Flash forward to 2016 -- and Wilkerson's social media musings are simply "indispensable."

Having established her willingness to overlook the most singular aspect of Wilkerson's, uh, public service, O'Connell asks her about the vacancy on the Supreme Court following Justice Scalia's passing --

O'CONNELL: Before we talk about presidents, let's talk about the Supreme Court and the opening. What's your take on what's happening and what do you think will happen?

WILKERSON: I think, you know, of all of the comments, conversation and dialogue this weekend, the thing that was most fascinating to me was Ted Cruz's tweet and in his tweet he said Scalia was a hero and we owe it to him to replace him, you know, for us to basically wait until the next president to replace him. And I thought, wow! Like, this is why I'm so excited about social media because it has, it allows people to offer different thoughts and if you only relied on the mainstream ...

Such as the cable news outlet I'm on now ...

WILKERSON: ... you'd be totally confused, if you only relied on the mainstream you would think that the Senate or the public has a right, if they're in the majority, to identify and select a Supreme Court justice. And what I would say to people, if it was supposed to work like that, that you have to replace a conservative with a conservative, we would never have gotten from Dred Scott to Brown v. Board of Education.

Justice Scalia was an American hero. We owe it to him, & the Nation, for the Senate to ensure that the next President names his replacement.

O'CONNELL: You know, I was fascinated too by Cruz and also by the way of saying that the American public should be allowed to vote. Well, that's what we do, we're a representative democracy, we vote for a president, and although I understand most Americans really don't get the connection, and I understand that ....

Especially all those knuckle draggers west of the Hudson, at least until you reach the Left Coast ...

O'CONNELL: ... but we do vote for a president and the president picks people.

O'Connell seems to be alluding to a different tweet from Cruz, also on Feb. 13 --

Voters must determine who has the judgment to nominate principled constitutionalists to the court https://www.youtube.com/watch #GOPdebate

WILKERSON: So this is the practice, this is how it works. A president has the right to choose a justice for the highest court in the land that he or she believes is going to interpret the Constitution in a way that that president, that meets with that president's philosophical, political, social, legal construct of the Constitution.

O'CONNELL: And the Senate gets to decide if that person is worthy or not.

A seldom-heard acknowledgment from nearly any liberal this week --

WILKERSON: And I'll go out on a limb to suggest that I doubt that a Scalia candidate would be the choice of this president. Sure the Republicans would like to have someone replace him like him, but that just not how it works and they need to stop crying.

O'CONNELL: You know, what cracked me up though about Cruz is that if Scalia is indeed a true originalist, Cruz would not be able to run for president ...

O'CONNELL: ... because his definition of the Constitution as it was written was a very narrow number of people who were born in the original 13 colonies!

More accurately, the Constitution mandates that "No person except a natural born Citizen, or a Citizen of the United States, at the time of the adoption of this Constitution, shall be eligible to the Office of President." O'Connell is apparently alluding to the "at the time of" clause here, although this has obviously not prevented most presidents born since the early 19th century and outside the 13 colonies to ascend to the office. It also did not keep Barry Goldwater (born in Arizona before it was a state) from running in 1964, George Romney (born in Mexico, the son of Mormon missionaries) as a candidate in 1968, and John McCain (a Navy brat born in the Panama Canal Zone) as the GOP nominee in 2008 --

WILKERSON: I think the other thing too is that, I actually think that the Republicans are between a rock and a hard place. They have to know that, number one, the president has the power to appoint in recess which means, they're in recess now 'til Feb. 22nd. He really could. They have to know that there is no rational majority of people in this country who would take the risk of giving either Donald Trump or Cruz who I question his own legality in terms of his ability to be the president. No one's going to allow that possibility. So I think in some respects this opposition actually works in the favor of the non-Republican candidate whoever that is because people would be scared out of their britches.

Substitute "liberals" and "Democrats" for Wilkerson's claim about "people" and her assertion approaches accuracy. And how rich indeed to hear a former lawmaker who served time for bribery -- not that we'll be reminded of that on New England Cable News -- question Cruz's "legality."