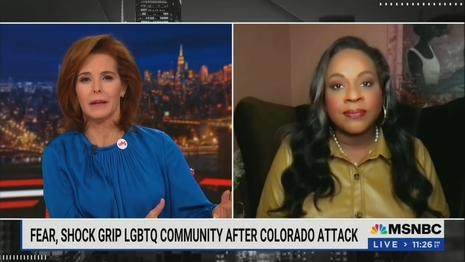 The last month has seen the leftist media blame conservatives (including the late great Rush Limbaugh) for the gay nighclub shooting in Colorado, claim Herschel Walker supporters were “comfortable with cruelty” and charge that the U.S. was as bad on human rights as Qatar — thanks to Republican governors.

On the other hand, they bent over backwards praising outgoing Speaker of the House Nancy Pelosi as they were “in awe” over the “legendary” “most important” and “consequential” Speaker in “American history.”

CNN host Don Lemon was in complete denial or blatantly lied when he told CBS Late Show host Stephen Colbert “I don’t think we ever were liberal” on CNN.

The following are some of the most outrageous outbursts from lefty journalists and Hollywood types from November:

Lemon Is Either Lying or He’s Crazy

“Then where does the hate come from? We obviously do not yet know the motivation of this shooter….Where does this anger, where does the violence stem from?...The far-right is dehumanizing, right? It’s demoralizing the LGBTQ community. And truthfully any ‘other’ community that is not white, heterosexual, and straight. It’s happening all across the country….None of it’s new, right? Rush Limbaugh was the king of this kind of misinformation for decades. But for many of those decades he was the only one out there doing it. Why has it gotten so much worse? Because there’s so many Rush juniors out there?”
— Host Stephanie Ruhle on MSNBC’s The 11th Hour, November 22.

Correspondent Audie Cornish: “She’s [outgoing House Speaker Nancy Pelosi] already in the National Women’s Hall of Fame at Seneca Falls, so you’re talking about the history book. That’s already written. So, I think this moment really is very powerful….Her leading the prayer to me is a significant moment. She’s always put her faith at the forefront even when her detractors were kind of saying that's not something Democrats would do. I think she’s always been a counterbalance to the strongest talking points from the Republican side.”...
Host John King: “This is like watching, you know, a great performer on the stage or a great athlete making a big decision about the next chapter.”...
Cornish: “ She was there for the most consequential moments of the last 15 years legislatively….I know people like to say, like, she’s a spunky grandma who just happened to get there. And, to me, that's, like, the antithesis of her story….Her story is a person who was in a political family who rose to political power and has held on to it as she wants.
King: “She may be a spunky grandmother but she works hard.”
— CNN’s Inside Politics, November 17.

“I think she’s [outgoing Speaker of the House Nancy Pelosi] may be the most important Speaker of the House in American history….Pelosi has a legacy that is so large not just for shattering the glass ceiling of being a woman but I think the Affordable Care Act….That really has provided so many people with the ability to pay for operations, surgical procedures, saved lives, and Obama and Harry Reid say it couldn’t be done without Nancy Pelosi. That’s a big feather in her cap.”
— CNN presidential historian Douglas Brinkley on CNN’s Inside Politics with John King, November 18.

“It’s the end of an era and an incredible one, and I mean, whether you’re a Republican or a Democrat, it’s sort of hard not to be in awe of what she has accomplished. Unless you’re in a cult.”
— Co-host Mika Brzezinski on MSNBC’s Morning Joe, November 18.

“Along with thick skin and a wicked sense of humor, these skills helped make Pelosi by far the most consequential Speaker of our time….When she said she prayed for the presidents she supported and those she opposed, including [Donald] Trump, she was serious. Nancy Pelosi is a believer. And her belief has made ours a more perfect union.”
— The Washington Post columnist Eugene Robinson in November 17 article “Nancy Pelosi was the Most Consequential Speaker of Our time.”

“Your reaction to [Republican House Minority Leader] Kevin McCarthy? I mean his threats of investigations, if the [Homeland Security Secretary Alejandro Mayorkas] secretary doesn’t resign. Is this what we can expect if Kevin McCarthy becomes Speaker of the House? Leadership by bullying?”
— Host Alex Witt to Democratic Rep. Mike Quigley on MSNBC’s Alex Witt Reports, November 26.

It’s the End of America, As We Know It

“Donald Trump has instilled such fear in other Republican candidates that they go right up to the trip wire of answering the question of if he does indeed, God forbid, become President of the United States again, it poses a threat to national security, and a threat to the larger existence of the United States of America, as we know it?”
— MSNBC contributor Mike Barnicle on MSNBC’s Morning Joe, November 18.

“What strikes me most is how many people are comfortable voting for cruelty. Comfortable voting just because they don’t want other people to have something….Why would you subject yourself to voting for somebody like him [GOP Senate candidate Herschel Walker] who is rife with this many issues? And then, you realize what it is. It’s that, oh, as long as he has pledged to go after these specific people who they don’t like, or vote against these people that they don’t like, then it’s perfectly acceptable to have a certain amount of incompetence.”
— Former ESPN host and current The Atlantic writer Jemele Hill on PBS’s Amanpour and Company, November 10.

Nevermind Russia and China, Elon Taking Over Twitter is the Real “Threat” to “National Security”

U.S. Just as Bad on “Human Rights” as Qatar, Thanks to Republicans

“No one is saying Qatar is perfect. But I’m urging us to be a bit more nuanced in our critiques and resist simply parroting generic Orientalist tropes. While it is fair to question and criticize Qatar, I wonder if this debate is truly about migrant workers’ rights and human rights….I wonder if any of these American pundits, grandstanding about human rights, called for the U.S. to be stripped of hosting the 2026 World Cup for the way elected leaders in this country and our judicial system in this country have rolled back reproductive rights, or are trying to ban the world ‘gay’ in public schools or even ban books.”
— Host Ayman Mohyeldin on MSNBC’s Ayman, November 19.

She Must Be a Blast at the Thanksgiving Dinner Table

“It’s also important to unpack the myth of Thanksgiving. It is a holiday riddled with historical inaccuracies. Built on this myth that the indigenous welcomed their colonizers with open arms and ears of corn. A simplistic fairytale interpretation of a 1621 encounter between indigenous tribes and English settlers that erases the genocide that followed. It’s the truth that Republicans want banned from our textbooks because here is the secret they want so desperately to keep. We are a country founded on violence. Our birth was violent. In 1619, a ship with more than 20 enslaved Africans landed in Virginia, ushering in two centuries of American slavery that left millions in chains or dead. With those humans in bondage were finally free, a terrorist organization that was a card carrying member of polite society, Ku Klux Klan, picked up where the Civil War ended, using violence to maintain white supremacy.”
— Host Joy Reid on MSNBC’s The ReidOut, November 23.

“I have no idea what’s going to happen in 2024, but we can’t just take it for granted that Trump is toast and assume he’ll quietly go away. He’s still a deeply nefarious presence in American politics. I mean, sure, he’s facing a potential primary challenge from a popular Florida governor backed by the GOP establishment, and as we all know from history, that usually works out. And Ron DeSantis doesn’t have the sparkling personality of Jeb Bush, DeSantis is like if a mailbox could be racist….I have no idea which of these ass[bleep] will out-ass[bleep] the other ass[bleep] and win, but it will certainly be interesting to watch them destroy each other.”
— Host Seth Meyers on NBC’s Late Night, November 17.