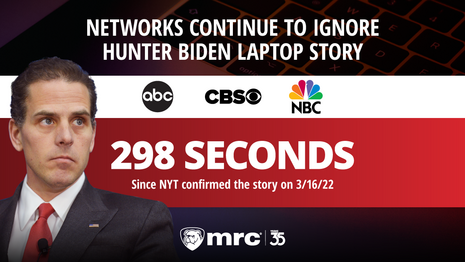 UPDATED THROUGH THE MORNING OF OCTOBER 6:

On March 16, The New York Times belatedly confirmed that Hunter Biden’s laptop is real and not an example of “Russian disinformation.” If the liberal broadcast networks were waiting for an all-clear to admit the explosive Hunter Biden laptop story (that was first broken by the New York Post way back on October 14, 2020) was real and legitimate, this was it.

Still it’s been mostly silence from the networks. Since publication of that New York Times story (204 days ago) the Big Three (ABC, CBS, NBC) networks on their evening, morning and Sunday roundtable shows have spent a total of 298 seconds (4 minutes, 59 seconds) on it. Of that total, 74 seconds (1 minute, 14 seconds) used dismissive language.

The most recent mention was (114 days ago). After a whopping 599 days straight without talking about it, ABC News reminded their viewers about Hunter Biden’s laptop! Well, sort of.

In an exclusive June 14 interview with Hunter’s ex-wife Kathleen Buhle, Good Morning America co-host Amy Robach asked about photos from the laptop of her ex-husband looking “disheveled.” That’s right, that’s it. No mention of Hunter being naked with hookers, drugs and allegedly an illegal gun or his repeated use of the “n-word.” More importantly, no questions from Robach about emails from the laptop confirming Hunter’s sketchy business relationships in which he referenced “the big guy” AKA Joe Biden.

In an interview that lasted 6 minutes and 50 seconds there was this mere 23-second exchange about Hunter’s laptop:

CO-HOST AMY ROBACH: We’ve seen images of Hunter, the ones that were on his laptop looking disheveled. Was that the husband you knew in moments at times?

KATHLEEN BUHLE: Not at all. He was struggling under a massive drug addiction and that’s heartbreaking and painful and that wasn’t who I was married to.

Previously, ABC brought up the Hunter Biden laptop scandal in a 58 second reference on the October 23, 2020 edition of ABC’s Good Morning America.

The most recent mention on NBC News arrived on the May 19 NBC’s Today (140 days ago) show in a story by correspondent Hallie Jackson that was prompted by Hunter’s Hollywood lawyer paying off a “multi-million dollar tax bill” the President’s son owed to the IRS. The Jackson story also ran on the May 18 NBC Nightly News. That stopped a 47-day long NBC streak of ignoring the Hunter story that went back to a 22 second mention on the March 31, NBC Nightly News.

The last time Hunter’s laptop scandal was mentioned on CBS (169 days ago) arrived on the April 20 edition of CBS Mornings during an interview with Comedy Central’s The Daily Show comedian Jordan Klepperer about his upcoming special on CPAC in Hungary. Co-host Gayle King and Klepperer seemed upset that the Hunter Biden laptop scandal was still a topic of conversation EVEN in Hungary. Total time on laptop in that segment = 30 seconds.

CBS News had the opportunity to break their current streak of ignoring Hunter Biden’s laptop scandal, when they invited Hunter’s ex-wife Kathleen Buhle on the June 16 edition of CBS Mornings to talk about her new memoir. However, CBS correspondent Anthony Mason spent 8 minutes, 5 seconds completely avoiding any discussion of the wrongdoings confirmed by the investigation into his laptop. Another missed opportunity was the September 18, 2022 edition of CBS’s 60 Minutes when correspondent Scott Pelley interviewed the President. He briefly brought up Hunter’s problems but there was no mention of the infamous laptops. Though the show is not included in this study’s parameters, it was an opportunity to press Biden on the laptop topic that could have produced clips CBS could have run on their evening, morning or Sunday roundtable shows.

For more on how the networks have censored the Hunter laptop scandal story please go here.

Study parameters: From October 14, 2020 (the day the New York Post broke the laptop story) through the morning of October 6, 2022 — a period of  over 23 months — MRC analysts looked at the ABC, CBS, NBC evening and morning shows and their Sunday roundtable programs. It should be noted this study is looking at revelations that primarily stemmed from the laptop discovery. Stories on the investigation into Hunter’s tax affairs that pre-date the laptop story or later Hunter scandals like his art gallery deal were not included in this study sample.