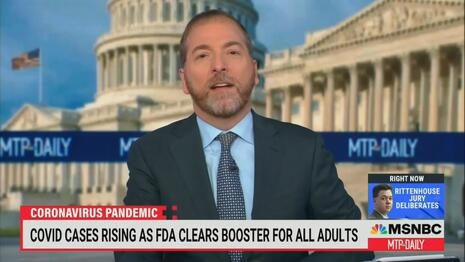 There was a lot for the leftist journalists to be upset about this month. First they saw a key bellwether race in Virginia blow up in their faces.

Then they saw their man President Joe Biden’s ratings take a nosedive, even as they lamely attempted to sell his policies and try to tell their audiences that inflation wasn’t that bad.

There was also the Kyle Rittenhouse verdict. When that didn’t go their way, they had a fit. No, this wasn’t a clear cut case of self-defense. For them it was the start of an “open season” for “white men” to “carry out” a “massacre.”

The following are some of the most obnoxious takes by liberal journalists from the past month:

Right-Wing Media “Misinformers” Have “Blood on Their Hands”

“The pandemic has been relentless. And since Biden tried to declare independence from it on July 4th, more than 160,000 Americans have been added to our death toll, despite vaccines being widely available. Obviously, most of those recent deaths are the unvaccinated. So the folks with blood on their hands there are the misinformers, particularly in right-wing media….The unfortunate dark reality is they [Biden administration] are fighting some powerful forces of defiance and disinformation, which have only worsened the partisan gap and human suffering.”
— Host Chuck Todd on MTP Daily, November 19.

“This Build Back Better bill has relief for people suffering from big bills on childcare, it’s got stuff for climate change, it’s got stuff to lower higher ed costs, it’s got all these things that would affect people’s lives, real people, real lives. And yet, Democrats don’t seem to be able to communicate that. When people are asked, ‘will it affect them,’ they say no.”
— Co-host Tony Dokoupil on CBS Mornings, November 24.

Host Joy Reid: “Put it in perspective — this [infrastructure funding ] bill — because it’s big. What do you make of it?”
NBC News presidential historian Michael Beschloss: “There is no way that our descendants will not be reading about what happened today in history books 100 years from now.”
— MSNBC’s The ReidOut, November 15.

“Bill Clinton used to say that a President’s lucky to get a sentence. Lincoln saved the Union, FDR defeated the Depression and won World War II. Biden’s well on the way to writing his sentence here. This [infrastructure funding bill] is a significant investment in the country. It will rank, I think, with what President Eisenhower was doing in the 1950s.”
— Presidential historian and former Newsweek editor Jon Meacham on MSNBC’s The Beat, November 15.

Former The Guardian writer/photographer Chris Arnade: “People are angry. COVID’s still here….and inflation’s here….Biden was elected to bring things back to normal and things aren’t normal. It’s as simple as that. And so, they connect that to the president.”
Host Brian Stelter: “Right, and that’s what I mean about feelings over facts.”
— CNN’s Reliable Sources, November 28.

“Gun laws helped to enhance the design to allow this verdict to happen today. This country was built on the idea of — that white men had a particular kind of freedom and a particular kind of citizenship that only they have that gives, you know, from the slave catchers on, the right to inflict violence in the name of protecting property. That’s, like, the foundational creation of the United States.”
— Host Joy Reid discussing Kyle Rittenhouse verdict on MSNBC’s The ReidOut, November 19.

“If I’m walking around and I’m white nationalist, you know, coward little kid with an AR-15 and I see somebody drive by with a Black Lives Matter bumper sticker and I feel threatened, I can open fire. If I go by a youth group standing outside the local Target chanting ‘Black Lives Matter’ and I feel threatened, I can open fire….My primary concern about this ruling is that it is now open season and that white nationalists and domestic terrorists across this country are high-fiving.”
— Substitute host Jason Johnson on MSNBC’s The ReidOut, November 19.

“At some point, someone is going to weaponize self-defense and when I say weaponize it, I mean, they’re going to have a designated Kyle Rittenhouse….When you can anticipate or precipitate an attack, whether it’s bottles thrown at you, then not only can that person go back and defend himself, others can turn their weapons and carry out a massacre and say it was in defense.”
— MSNBC counterterrorism analyst Malcolm Nance on MSNBC’s The ReidOut, November 19.

“Kyle Rittenhouse killed two white men protesting on behalf of Black lives and got away with it. That’s the single most important thing to understand about today’s ruling. By allowing him to go free and potentially commit other crimes, this jury sent the final and loudest warning to white America about the dangerous rise of white nationalist terror in this country....Kyle Rittenhouse was able to kill Joseph Rosenbaum and Anthony Huber and face no consequences because those men were race traitors.”
— Substitute host Jason Johnson on MSNBC’s The ReidOut, November 19.

“[The Kyle Rittenhouse trial] reminded a lot of people of….the Brett Kavanaugh hearings, in which Brett Kavanaugh, who had been accused by a high school friend of committing sexual abuse of her, cried his way through the hearings….His tears turned out to be more powerful than the tears of Christine Blasey Ford, which were the tears of an alleged victim….But in America, there’s a thing about both white vigilantism and white tears, particularly male white tears. Really, white tears in general because that’s what Karens are, right? They Karen-out, and as soon as they get caught, they bring waterworks. White men can get away with that, too, and it has the same effect….Even as the right tries to politicize the idea that masculinity is being robbed from American men by multiculturalism and woke-ism, they still want to be able to have their tears.”
— MSNBC’s The ReidOut host Joy Reid on her Tik Tok account, November 16.

“I want to choose my words carefully because I am sure [Republican Senator John] Kennedy will take a victory lap on another channel tonight. This is a disgrace not just to the country, not just to the United States Senate. It is a disgrace to the party of Ronald Reagan who described the United States of America as a shiny city on the hill, not because it was bright or shiny but because it was a beacon for people like this Biden nominee. What do you do with a party that is at best stupid, at worst, flagrantly racist?”
— Host Nicolle Wallace after a clip of Republican Senator John Kennedy telling Comptroller of the Currency nominee Saule Omarova he’s not sure whether to call her “professor” or “comrade” as aired on MSNBC’s Deadline: White House, November 18. (In March 2019 Omarova tweeted “Until I came to the US, I couldn’t imagine that things like gender pay gap still existed in today's world. Say what you will about old USSR, there was no gender pay gap there. Market doesn’t always ‘know best.’”)

“You have the Democrats, the responsible parent telling you to be decent to people who are different from you and take care of the Earth, and don’t threaten to kill people….and who pass things like health care and roads and bridges and food for people who can’t afford it. Then there’s the other parent, the YOLO [You Only Live Once] parent, the Republicans, who lets you stay up all night and eat Snickers for dinner, and take off your mask in a COVID cloud, and ‘Sorry, you can’t have health care if you get sick because YOLO!’ And whose answer to anything and everything is to scream about the border and ‘the scary Brown people are taking over America and meh, and history is mean. Cancel it!’...Your drunk, mostly absentee, Nazi- curious, authoritarian Republican Party is doing this circus, waiting around for you to put their ridiculous, embarrassing, democracy-hating, Trump-cult authoritarianism, open-racism-embracing, dangerous behinds back in power.”
— Host Joy Reid on MSNBC’s The ReidOut, November 18.

“Here they want white supremacy by ventriloquist effect. There is a black mouth moving but a white idea running on the runway of the tongue of a figure who justifies and legitimates the white supremacist practices. We know that we can internalize, in our own minds, in our own subconscious, in our own bodies, the very principles that are undoing us. So to have a black face speaking on behalf of a white supremacist legacy is nothing new.”
— Vanderbilt University Professor Michael Eric Dyson on Republican Virginia Lieutenant Governor-elect Winsome Sears as aired on MSNBC’s The ReidOut, November 4.

“Glenn Youngkin in Virginia played the race card, and he played it from the bottom of the deck.….Youngkin was perfectly happy to connect with Virginia’s horrible, violent, ugly history, which is centuries of slavery, white supremacy politics….This connects to Republican politics back to Ronald Reagan talking about welfare queens and Richard Nixon talking about law and order just as infamous as Glenn Youngkin talking about Toni Morrison, a world-renowned, justifiably black woman which I’m not sure he’s ever read and using that to send not a dog whistle, but an air horn to people who believe in white supremacy.”
— NBC News presidential historian Michael Beschloss on MSNBC’s The Sunday Show, November 7.

“Waukesha will hold a moment of silence today, marking one week since a car drove through a city Christmas parade, killing six people and injuring scores of others.”
— November 28 tweet CNN’s official Twitter account. The driver of the car, who was not mentioned in the initial tweet, was Darrell Brooks, a felon who has reportedly expressed hatred for white and Jewish people.

“Here’s what we know so far on the sequence of events that led to the Waukesha tragedy caused by a SUV.”
— November 25 tweet from The Washington Post’s official Twitter account.

Trump “Lost So Much Time” on Stopping Climate Change, Is It Too Late?

“It’s been 15 years, though, since An Inconvenient Truth came out. How much ground have we lost because of inaction and the rollbacks under President Trump….over the past 15 years….Have we lost so much time that we are not going to be able to recover?”
— Host Andrea Mitchell to former Vice President Al Gore on MSNBC’s Andrea Mitchell Reports, November 4.

“How do Indigenous people spend Thanksgiving? For many, rather than a celebration of peace and shared prosperity between Native Americans and Pilgrims, Thanksgiving represents the dark shadow of genocide and the resilience of Native people….For tribal citizen Dennis W. Zotigh, Thanksgiving is ‘a day of mourning.’”
— November 23 article by USA Today reporter Michelle Shen.

Time to Tweak Those Outdated Amendments

“When the Founding Fathers were busy with the amendments, the First and Second Amendments did not have AR-15s in there, weapons of war, and they didn't have Twitter. So both amendments, I think they need to be tweaked a little bit.”
— Co-host Joy Behar on ABC’s The View, November 30.