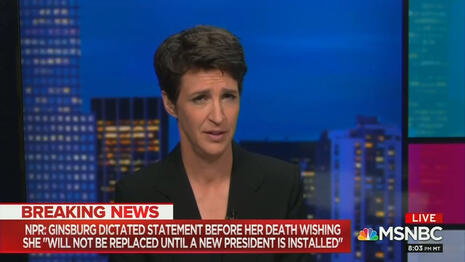 When Ruth Bader Ginsburg passed, tearful liberal journalists (according to his wife, ABC News anchor George Stephanopoulos cried for 45 minutes) eulogized the Supreme Court Justice as a “pioneer” and “improbable pop icon” who, as MSNBC’s Brian Williams deemed, was “blessed with an extra type of divine righteousness.”

However it wasn’t long before their sadness turned to rage. MSNBC host Rachel Maddow declared Ginsburg’s death a “feminist catastrophe,” while her colleague Jonathan Capehart started issuing threats against conservative attempts to replace Ginsburg before the election, warning President Donald Trump and Senator Mitch McConnell “that there will be a price to pay.”

The Hollywood Elite entered the fray as well as filmmaker Michael Moore warned the GOP wanted to “Keep their feet on the necks of women” and director Rob Reiner tweeted “This is war.”

There was a far different reaction in 2016, when conservative Supreme Court Justice Antonin Scalia passed away. On February 14, 2016 MSNBC host Ari Melber scornfully eulogized Scalia as a “man who in his decisions, and in many of his dissents, was seen by man as closed to the plight of many people.”  MSNBC correspondent Irin Carmon added: “Somebody whose jurisprudence certainly left you out in the cold, as you say, many historically-oppressed people.”

The New Yorker’s managing editor Silvia Killingsworth within just a few minutes of Scalia’s death spewed out these cursed tweets: “Died in a ranch in Texas. God bless America.” “Wish I could be a fly on the wall for Scalia’s chat with the Devil.”

The following are the worst reactions (so far) by liberal journalists and celebrities in the wake of Ginsburg’s passing:

“What a Legacy!” “Pop Icon” = Things They Never Said About Antonin Scalia

“What a life it was! What a legacy it was!...Justice Ruth Ginsburg, one of those Americans, and there aren’t many, really, who through force of character and her brilliant intellect was able to expand our understanding of  those bedrock constitutional ideals, equality and liberty….Her character, her intellect, her fierce determination to see the words equality and liberty made real for Americans changed America. Overnight crowds gathered on the steps of the Supreme Court to mourn the passing of Justice Ruth Bader Ginsburg at 87 years old. So many young people there, saying goodbye to a most improbable pop icon.”

A Tale of Two Headlines

“A Pioneer Devoted to Equality”

“Blessed with An Extra Type of Divine Righteousness”

“I was reminded tonight that in the Jewish faith, those who die on Rosh Hashanah are believed to be blessed with an extra type of divine righteousness.”

“Me and the girls get into the car. We are waiting, waiting, waiting, waiting. He [ABC’s Good Morning America co-host George Stephanopoulos] finally comes in. He bursts into tears. Ruth Bader Ginsburg has died. My two daughters. We sat there in the parking lot, crying for 45 minutes.”

— Actress and wife of ABC’s This Week moderator and Good Morning America co-host George Stephanopoulos relaying on the syndicate Live with Kelly and Ryan, September 21.

Host Chris Hayes: “Losing her [Ruth Bader Ginsburg] at this point a day after yet another woman came forward to say the President of the United States sexually assaulted her. What does it mean to you? What does it say about where we are?”

New York Magazine writer Rebecca Traister: “It is the world’s most chilling and horrible poetry...Remember, if Barack Obama had been able to appoint his justice, this would not mean the thing it does now and that was a breaking of how this country works.”

— MSNBC’s All In With Chris Hayes, September 18.

“We ended up with Justice [Neil] Gorsuch instead of Justice Merrick Garland. I think a lot of the emotion around that in the country was, in part, that the Republicans and Mitch McConnell had done something that really did feel like it broke the system. That really did feel like just a small ‘d’ anti-democratic assault on the process. But it also felt like a feminist catastrophe in you not becoming the first woman president, despite Justice Ginsburg’s fervent belief that you would be.”

Dems Need to Come Up with “Threat List,” There Will Be “A Price to Pay”

“Democrats can’t just threaten: they have to mean it. They have to mean it when they say, ‘we are going to get rid of the filibuster rule if you do this, that we are going to add Supreme Court seats, or Justices to the Supreme Court if you do this. And I think there are a whole lot of other things that could be added to the threat list….It’s time for Democrats to step up, and use everything in their power to ensure that if Mitch McConnell and President Trump do what we all believe and know they’re going to do, that there will be a price to pay no matter who wins the election in November.

“Americans didn’t get any time to mourn this great justice, because less than two hours after we learned of [Ruth Bader] Ginsburg’s death, we heard from Senate Majority Leader and neutered dog sack, Mitch McConnell. Who said, ‘President Trump’s nominee will receive a vote on the floor of the United States Senate.’ He couldn’t even wait ‘til the morning. It’s like a husband rushing to the scene of the accident and going: ‘No! Not my wife! Hey, is that EMT Single? ‘Cuz I am!’ Apparently, since 2016, McConnell has had a change of heart, or whatever squirming bag of scorpions occupies that dark cavity.”

“Ruth Bader Ginsburg’s body isn’t even cold and Mitch McConnell is dancing on her grave. This is war. Dems have powerful weapons. Now is the time to use them.”

“Ladies you KNOW these types of men - the closet sadists  among us - the racists sexist  gangsters pimps fascists- angry impotent cowards who abuse power cause they can - You want these types of guy- trump and Barr - in controll of yr  bodies?”

Get Republican Men’s Feet Off “Necks of Women”

“We’re [men] not affected personally by Roe v. Wade, so it’s even more incumbent upon us to stand up and speak up for women’s rights and to keep the grubby hands of the Republican party and the Christian right off the bodies of women….We still haven’t taken our feet off women’s necks — that’s why they’re [Republicans] so anxious to get in there right now and get this justice, this right-winger in there and get rid of Roe v. Wade because that’s what they want: Keep their feet on the necks of women.”

May the Force Be With Dems?

“It’s sad that Judge Ruth Bader Ginsburg, who fought so long for what was right, should have to close her eyes on the country as it is. But she was a champ in every way. We were lucky to have her. Maybe she’ll be like the spirit of Obi-Wan in our battle to defeat the Death Star.”